Brian Kibler is always dressed sharply for big events these days, but this time even more so. In addition to a sharp black suit, Kibler now sports the ring that marks him out as one of the latest members of a very exclusive club, the Pro Tour Hall of Fame.

The ring on his finger (artfully placed on the ring finger of his right hand, so as not to scare off the ladies), did not slow down Kibler's pre-match routine of brisk shuffling while listening to pounding techno music (in this case Kaskade – Call Out Digital LAB Mix). His opponent, Sam Black, a fellow starCityGames.com writer, would pose a stiff test in the second Standard round here at Worlds.

Following a mulligan to six on the play, Sam led with a Swamp and a Pulse Tracker.

"It could be anything!"

"I think I have a read," smiled Kibler, as he cast a Preordain off Seachrome Coast.

Vampire Lacerator was the next play from Black, which led Kibler to "caw for backup," casting a Squadron Hawk. The Hawk died to a Lightning Bolt, which allowed Sam to keep attacking unimpeded. Kibler was swiftly at 14 when Sam cast a Viscera Seer post combat. 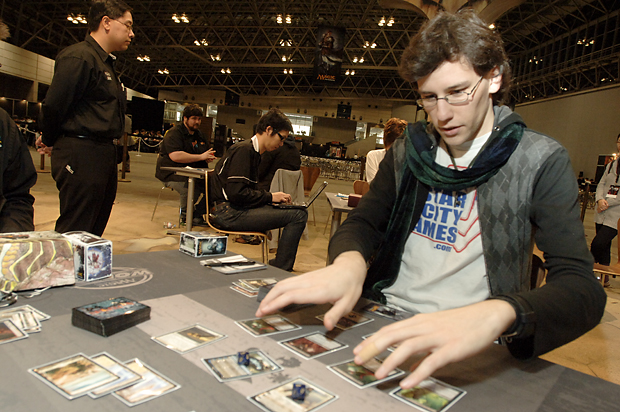 Sam Black and his Vampires are out for blood.

All that Kibler would do for the following turn was make Squadron Hawk, ready to trade with Pulse Tracker. While Black was stuck on two lands (a Swamp and a Lavaclaw Reaches), his Vampires deck did not seem to mind, keeping up the pressure with a Bloodghast. The Bloodghast would play nice with Viscera Seer if Sam drew a land, but he didn't seem too perturbed in any case, as for yet another turn, all that Kibler had was a Squadron Hawk.

The Hawk traded with Viscera Seer, and Kibler dropped to 4. This became 3 when he cracked an Arid Mesa for a Plains, but seemed worth it, as the fifth land allowed him to cast Gideon Jura, which would buy him some time. Pulse Tracker from Sam would help sneak through damage even with Gideon trying to become the centre of attention, and Kibler began to look concerned about his situation for the first time in the match.

Kibler cast Jace, the Mind Sculptor, and used the Brainstorm ability to hunt for answers. The final Squadron Hawk in Kibler's hand would still be useful for a shuffle, even though it couldn't fetch any more friends. As it was, Kibler had a fetch land to get the shuffling done, and cast the Hawk anyway, before forcing Black to send his force at Gideon Jura.

Attacks put Kibler at 1 life, and Gideon at no loyalty.

"Come on, deck. Are you good for another point?" Sam whispered as he watched Kibler cast a Preordain. Next up Kibler used the Brainstorm ability of Jace.

"I feel like you've probably got me," declared Kibler as he cast Day of Judgment. Indeed, Black did have the land to bring back both Bloodghasts, whose haste was enough to end things for Kibler.

"Interestingly, so many of the cards that I'm siding out are the ones that were in my hand last game," laughed Kibler, as he watched Black doing some fairly hefty sideboarding of his own. Sam's deck, in its vampire-themed sleeves, had started out strongly—would the Hall of Famer be able to win two on the bounce after sideboarding?

On the play, Kibler still had to watch Black take the first play of the game, in Vampire Lacerator. This was hit by a Condemn at the first opportunity, but the Pulse Tracker which followed did not meet so immediate a response. Kibler had a Spreading Seas for a Lavaclaw Reaches from Black, which would prove to be a virtual cantrip Sinkhole against the deck with relatively few colorless mana costs. When Black dropped a Viscera Seer onto the board, that was enough to bring a Day of Judgment from Kibler, whose draws seemed better suited to the task of stopping marauding vampires than in Game 1. 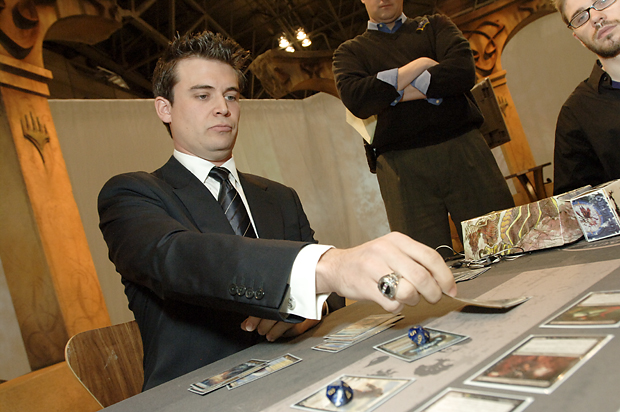 Newly minted Hall of Famer Brian Kibler is well suited to the task at hand.

Another Viscera Seer and a second Lavaclaw Reaches from Black came along, with the land also hitting the bottom of Black's deck thanks to Condemn.

Kibler was at a healthy 16 life when he dropped Gideon Jura, to force attacks from Black's Viscera Seer. The next turn he had the Squadron Hawk plan going too, meaning that he could set up for some nice trades, offing Viscera Seer at the first opportunity.

Black was in rough shape, without many creatures to get around Gideon Jura. He cast a Dark Tutelage, which was hit by Celestial Purge. Given that Black was tapped out, Kibler got in for a cheeky 6 with Gideon Jura. A Journey to Nowhere took out Bloodghast. Kibler was now all in on attacking with Gideon Jura, to put the game away fast. He lost one to a Doom Blade, but soon replaced it. A Kalastria Highborn from Black met a second Celestial Purge, and with Gideon continuing to rumble in, Black was soon reaching for his sideboard.

"It did feel more like you wanted to beat me that game," said Black as he shuffled up for the third game.

On the play for the decider, Sam led with a turn-one Pulse Tracker, following up with a pair of copies of Vampire Lacerator. All Kibler had was Squadron Hawk. 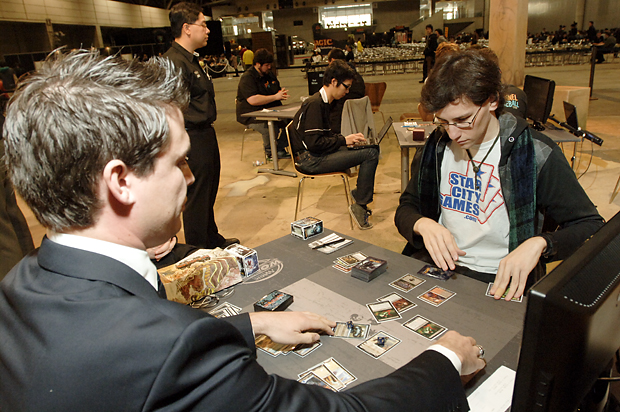 Black tries to break through Kibler's wall of 'walkers.

With such an aggressive start, Sam was able to really turn the screws on the Hall of Famer. A Kalastria Highborn pre-combat meant that Kibler's trade of Squadron Hawk for Pulse Tracker came at the additional cost of a drain of two life. On 11, he cast another Squadron Hawk and passed. Kibler had a Condemn to get rid of Kalastria Highborn, but it came after black had already cast a Viscera Seer, allowing a scry and a drain from Black. Kibler dropped to 7 before drawing for his fourth turn. There was no Day of Judgment, but a couple more Squadron Hawks bought him a small amount of time.

Black cast a Kalastria Highborn and swung. After combat, Kibler was down to just 3, as the Highborn again made trades less than exciting.

With so little life to play with, Kibler could not afford to get cute. He needed Day of Judgment or, even better, Gideon Jura. The latter would leave him safer against Bloodghast. As it was he had the former. It seemed Sam was ready for this turn of events, and had been holding back a Vampire Lacerator and Viscera Seer for just such an occasion. He cast both, and passed.

Kibler dropped to 2 to activate a fetch land and cast Gideon Jura, forcing some attacks. Kibler was now dead to Lightning Bolt and Kalastria Highborn. That's enough draws that he couldn't afford to play things too defensively.

After quite a bit of thought, Kibler added to his cavalcade of planeswalkers with Elspeth Tirel. She made three Soldiers, who would combo well with Gideon and for some nice blocks. The very next turn, Gideon became a creature, allowing Kibler to gain 4 with Elspeth Tirel before attacking for 6. Jace, the Mind Sculptor then joined the party.

In case we were concerned that there were not enough planeswalkers around, Sam cast Sarkhan the Mad. He used the 0-cost ability to try to draw out the situation that he found himself in, but a Doom Blade would not do it. When Kibler gained more life from Elspeth and fatesealed Black, that was enough for Sam to extend his hand.