While Gerry Thompson has certainly made a name for himself as one of the better (if not best) deck designers out there these days, his personal results have usually come in somewhere between respectable and consistent. But not so of late. Hot off of a win in Grand Prix–Nashville a few weeks ago, Gerry then stormed the StarCityGames.com Invitational just this past weekend, again the one left holding the trophy. 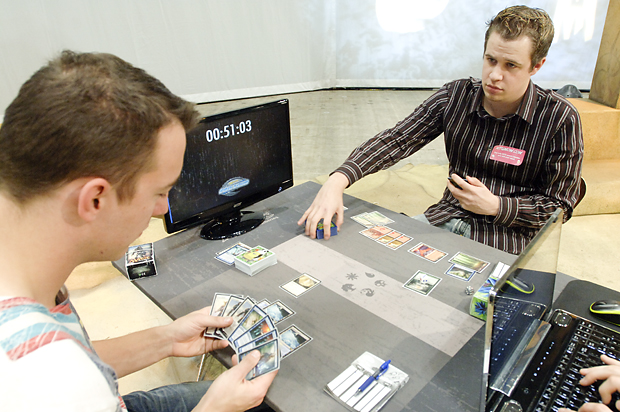 Olivier Ruel has had a quiet year, but not a quiet Magic career. As a Hall of Famer and renowned road warrior, he has been racking up the wins for so long, it predates the internet (warning: exaggeration).

Both players had already lost a round coming into the third. Olivier won the die roll and led with a collection of various white-blue dual lands, while Gerry slowly developed the mana of his Valakut deck. Olivier’s fifth turn saw him discard a Condemn, having stalled on three land. An end-of-turn Into the Roil bounced an Overgrown Battlement and a Spreading Seas locked out Gerry’s only remaining green source, the Aura thankfully finding Olivier his fourth land. Gerry simply played another Forest, and cast Cultivate for enough Forests that green mana would no longer be a problem. 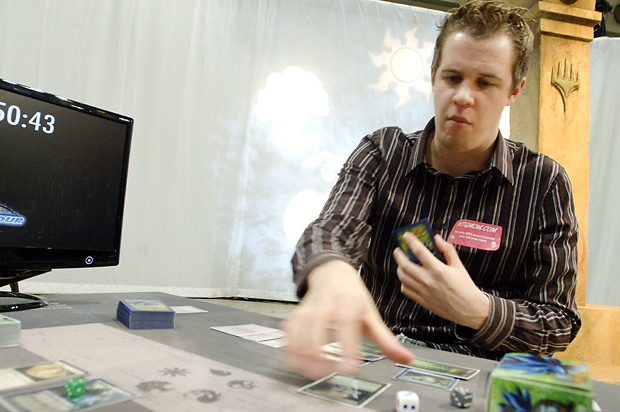 Gerry T is going for speed.

Jace Beleren was summoned to Olivier’s side, finding him a fifth land. Thompson used his abundance of mana to summon a Primeval Titan, finding a second Valakut, the Molten Pinnacle and switching on his Khalni Heart Expedition. The Expedition was cracked, and damage flew every which way, killing Jace and dropping Olivier to 11. A Journey to Nowhere took out the Titan, but Gerry just replaced it with an Avenger of Zendikar and attendant Plants.

Gideon Jura came down for Olivier and thumped his chest defiantly. Gerry played a land, beefing up his Plants and getting started on another Expedition.

“You’re thinking, ‘That has to be good for me,’“ Olivier smiled.

“Yep,” Gerry replied, crushing Gideon and passing back the turn.

Olivier summoned another Gideon, which again tried to stand between Gerry and his opponent. This time, Gerry added a final counter to the Expedition, and again Valakut showered Olivier’s side of the table with fire. Enough of it landed on Gideon that Gerry was able to attack to take Game 1.

“Have you been playing much recently?” Gerry asked as they sideboarded, alluding to Olivier’s absence from the Grand Prix circuit this year.

“Not as much,” Olivier admitted. “I have a job now. I have done some drafting, practiced some Standard, but don’t know anything about Extended. I like Five-Color, and I still have a couple of days to find a list. And the cards.”

Olivier took control on turn two with a “nnnnope!” and a Negate on Gerry’s Heart Expedition. A second expedition met the same fate (complete with another “nnnnope!”) but again Olivier seemed to be short on land. Thankfully, one of them was a Tectonic Edge, providing insurance against the Valakut Gerry accelerated into play with a pair of Explores. Olivier found a second Edge, and used one on the Molten Pinnacle. Gerry had another, but Olivier was reluctant to fall to two lands to destroy that one.

Gerry summoned an Inferno Titan. A Spreading Seas from Olivier nullified the Valakut, but this time he drew dead off of the Aura, and passed back the turn without a fourth land.

“Is Condemn power or toughness?” Gerry asked. “Not that it matters—I don’t think you have it in your deck,” he added as he pushed his Titan forward. 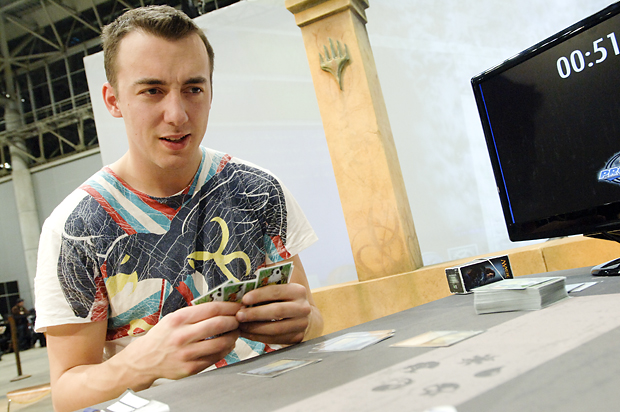 “It’s power, and you’re right, I don’t have it,” Olivier sighed as he dropped to 5 life. (Note: It’s actually toughness, we had this same discussion in the coverage team yesterday.) Olivier then cast Journey to Nowhere on the Titan, but a Gaea’s Revenge screamed into the Red Zone, and Olivier was down for the count.

“If I’d drawn a land off that Spreading Seas, I could have used the Journey to Nowhere on the Titan that turn,” Olivier lamented. “I was trying to decide whether I should just Journey, or try to Seas into Journey.”

“Yeah, I think you draw a land there, most of the time,” Gerry agreed.

2 Jace, the Mind Sculptor 4 Day of Judgment 3 Leyline of Sanctity