Conrad Kolos is having a great season and is looking to help bring the World Championship title home with him as a member of the United States national team. His opponent, Christian Calcano, had goals of his own this weekend that include taking the “Rookie of the Year” title with a high enough finish. These players would face off at 2-1 in Standard in the Valakut Ramp mirror.

Calcano won the die roll and chose to play first. He would also mulligan to six. Kolos kept his opening seven. 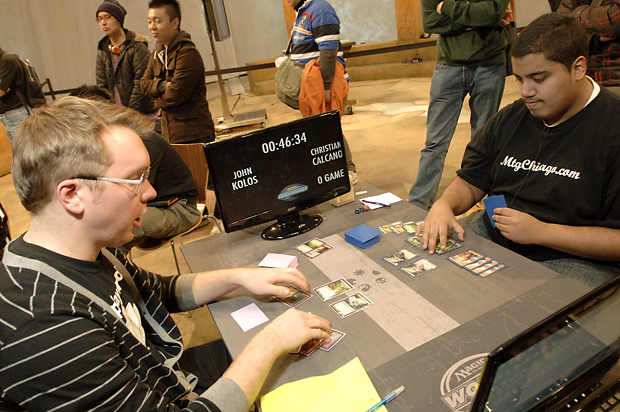 The first bit of “action” was Calcano’s turn-two Khalni Heart Expedition, while Kolos followed that with an Overgrown Battlement. A Cultivate from Calcano added two land to his side of the battlefield as well as two counters on his Expedition. Not to be outdone, Kolos resolved an Expedition of his own as well as an Explore. Two land, including Valakut, the Molten Pinnacle, hit the table for Kolos adding two counters to his Expedition. Calcano played a second Cultivate and an Explore on his turn, increasing his Mountain count by three but he was noticably missing Valakut to take advantage of the additional lands entering the battlefield. Kolos, on his turn, only played a Mountain and passed the turn with three counters on his Expedition and six mana available.

Smelling the “trap,” Calcano added a second Khalni HeartExpedition then a Mountain to his side of the table. Calcano then passed the turn with six mana of his own available alongside two Expeditions, one with three counters and the other with one. At the end of Calcano’s turn, Kolos cast Summoning Trap. This netted Kolos a Primeval Titan. Sensing his impending doom, Calcano responded to the Titan’s trigger with a Trap of his own. He was hoping for a Primeval Titan, but Avenger of Zendikar would have to do. Unfortunately the combination of the two additional Valakuts that Kolos would get with his Titan, the Expedition he had on the battlefield and the Harrow he revealed from his hand was enough to prompt a concession from Calcano. 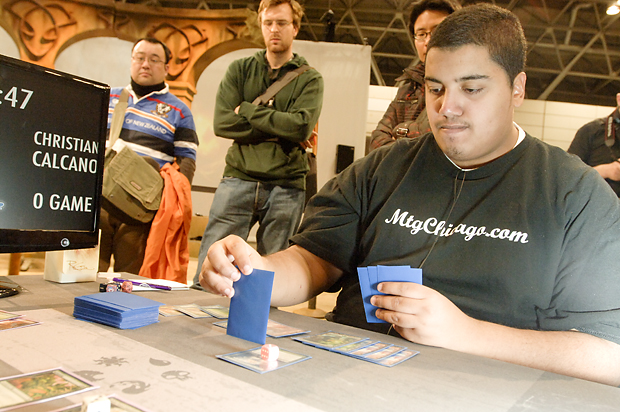 “I don’t know why I wrote ‘20/20’ on my life pad,” Calcano said, a commentary on the way the Valakut mirror usually plays out. As evident in Game 1, the life totals had the potential to drop from 20 to 0 at any moment.

Calcano kept his opening seven while Kolos would mulligan to 5. Calcano’s first spell was Explore which ramped him to three land on turn two. Kolos played a turn-two Khalni Heart Expedition. Calcano had a turn-three Explore along with two land to bring his land count to five. Kolos followed this with an Explore of his own, but he failed to make a third land drop. Kolos was stuck on two land, while Calcano laid a sixth land and passed the turn.
“You’re going to miss,” Kolos claimed, or maybe hoped, as things wouldn’t looking good for him after a Summoning Trap from Calcano. Kolos played Overgrown Battlement and passed still with two land on his half of the table. At the end of turn, Calcano cast Summoning Trap. He let out a sigh as all he could muster for his six-mana investment was an Overgrown Battlement . Kolos reached into his bag and pulled out an American flag.

“Doing it for the red, white, and blue?” asked Calcano. Kolos replied with a wave of the Stars and Stripes in the air. 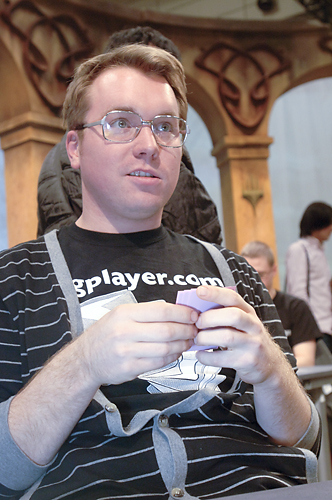 Kolos is crazy for the red, white, and blue.

Kolos started mounting a comeback with an Evolving Wilds, followed by Harrow, which put three counters on Khalni Heart Expedition. After sacrificing the Expedition, Kolos was able to untap with two Forests and four Mountains. Kolos promptly passed the turn with those six lands untapped.

“You’re going to miss,” Calcano commented as he started his turn. Primeval Titan was Calcano’s play. Two Mountains hit the table alongside two Valakut, the Molten Pinnacle, dealing 12 damage to Kolos. Before the end of Calcano’s turn, Kolos went for the Summoning Trap he telegraphed earlier, but Calcano was ready with a Harrow to deal 12 more damage in response and take Game 2.

Kolos put away his flag. “It’ll come back when you miss again Game 3,” Kolos added referring to Calcano’s “six-mana” wall from earlier.

Kolos started with six cards versus Calcano’s hand of seven, then led things with a turn-two Overgrown Battlement. Calcano followed suit with a Battlement of his own. Kolos’ turn-three was reminiscent of Game 2: an Expedition, but not a third land. Calcano again mirrored Kolos with an Expedition, but also had an Explore and two land drops to go along with it. Kolos’s turn-four Expedition was quickly outclassed by Calcano’s turn-four Primeval Titan. A second Titan from Calcano solicited a concession from Kolos.