2010 Magic: The Gathering World Championships Round 5: Two Sleeves Are Better Than One

Martin Juza is on something of a hot streak, after winning Grand Prix–Bochum in October and Grand Prix–Portland in September. His opponent, Yuuya Watanabe, has three Grand Prix Top 8s of his own this year.

On shuffling Watanabe's deck, Juza noted that Watanabe was taking part in the new trend that is set to sweep out of Japan into the rest of the Magic-playing world: double-sleeving! Coverage reporter Tim Willoughby says that he has personally witnessed a pint of beer being poured over a double-sleeved foil Jace, the Mind Sculptor (by accident, of course), which survived the experience intact. That's probably not the original reason that double-sleeving got started, but it's still nice to know. 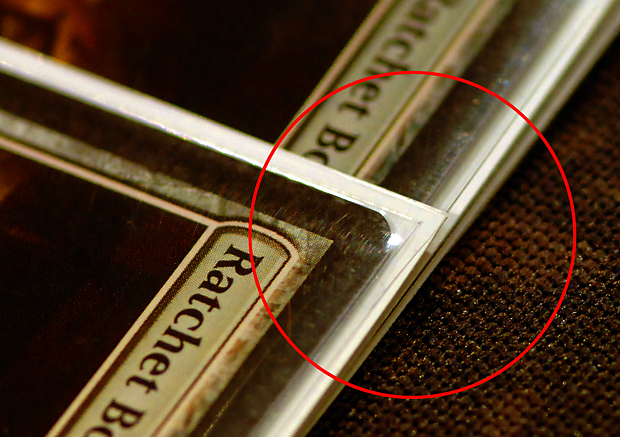 Both players started the game with Creeping Tar Pits, which were soon followed by Tectonic Edges. This set the tone for the match, as the decks were close enough to both be called "Blue-Black Control," but different enough that neither player was always sure what spells needed to be countered, or which lands needed to become the victim of Tectonic Edge.

Juza was the first person to gain the information advantage, as his Inquisition of Kozilek revealed Watanabe's hand after a few turns of each player playing lands. He looked at a few counterspells (Spell Pierce and Cancel), some lands (Darkslick Shores, Drowned Catacomb, and Tectonic Edge), and a pair of cards that distinguished Watanabe's deck from his: Calcite Snapper and Ratchet Bomb. He decided the ability to counter spells was probably Watanabe's biggest weapon, and got rid of the Cancel after quickly writing down all the cards. Once he'd done that, it was easy for him to cross off cards as Watanabe played them.

Watanabe cast the Ratchet Bomb he'd been allowed to keep, and then it was Juza's turn again. Juza played his second Tectonic Edge of the game and used both of them to destroy Watanabe's Creeping Tar Pit and Darkslick Shores. Watanabe was left with Drowned Catacomb, Island, Tectonic Edge, and Ratchet Bomb (with two counters) facing off against Juza's Creeping Tar Pit, Darkslick Shores, Island, and Drowned Catacomb.

Watanabe increased the counters on his Ratchet Bomb and played his Calcite Snapper. Juza did nothing on his turn but put a second Drowned Catacomb onto the battlefield. Watanabe didn't have a land to juice up his Calcite Snapper, so its attack only brought Juza down to 19. Juza's turn once more consisted of a single land drop. Watanabe also had a land, which made his Calcite Snapper a more formidable attacker. This time, Juza activated a Creeping Tar Pit, but Watanabe used his Tectonic Edge to destroy it before it could be declared. After the attack, Juza was at 15.

Juza's string of uneventful turns were now over, as he played a mighty Grave Titan. This being a big-time professional Magic event, it made sense that the Zombie tokens that accompanied it would be represented by a pair of Pro Player Cards: Kai Budde and Gabriel Nassif. Could Watanabe withstand the might of a pair of Hall of Famers?

Well, he could, but it would take a turn or so. He ratcheted up his Ratchet Bomb to five counters at the end of Juza's turn, then played a second Ratchet Bomb on his own turn. Juza was able to attack with the Grave Titan, which resulted in 8 damage getting through to Watanabe (from the Titan and Zombie Kai Budde) and two new pro zombies entering the battlefield: Raphael Levy and ... someone else. We apologize for the vagueness, but the two new Zombies entered the battlefield as a pair and left it the same way very shortly thereafter thanks to the new Ratchet Bomb. Adding a sixth counter to the veteran Ratchet Bomb took care of the Grave Titan, but not before Juza was able to cast a Sea Gate Oracle, which not only helped out in the card advantage area but also could provide a fine blocker to Calcite Snapper regardless of whether the Turtle was planning on being a 1/4 or a 4/1.

An equilibrium had been reached, and neither player was eager to break it. Each of them drew, then said, "Go." Juza reached eight cards in his hand and discarded a Doom Blade, ruing its uselessness for killing the shroud-having Calcite Snapper. Watanabe Preordained. Juza hit him with another Inquisition of Kozilek, which Watanabe Cancelled, which Juza Mana Leaked. Juza saw Ratchet Bomb, Mana Leak, Into the Roil, a pair of Spell Pierces, and Jace, the Mind Sculptor. Since Jace was out of the Inquisition's range, Juza made Watanabe discard the Mana Leak and cast another Sea Gate Oracle.

Watanabe again semi-ed, putting two cards on the top of his deck. Then he used Preordain to move those cards to the bottom and played a Misty Rainforest. On Juza's turn, he made the same attack as last time, Watanabe made the same block, and Jace was down to one loyalty counter. 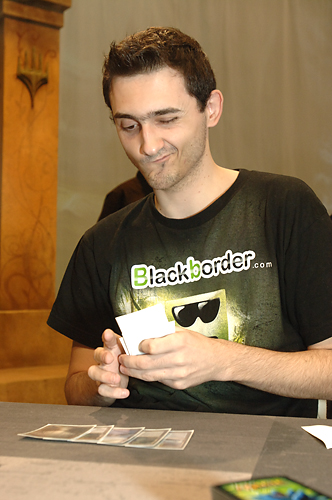 Martin Juza, not entirely satisfied with his cards.

Watanabe continued to use Jace, the Mind Sculptor's zero-loyalty-cost ability to , then cast an Abyssal Persecutor. A 6/6 flyer? Gosh! Juza Cancelled it, then (on his turn) sent both his Sea Gate Oracles after Jace again. This time, Watanabe used Into the Roil to bounce the one that hadn't been blocked, giving Jace another turn of Brainstorming. Juza replayed the Sea Gate Oracle and did a little card sifting of his own. It was time to go to work, so he played Spreading Seas on one of Watanabe's Tectonic Edges, then used his own Tectonic Edge to deal with the other one ... permanently.

Watanabe had another Abyssal Persecutor—and some Jace-fueled Brainstorming, but let's face it, the Demon's more exciting. And powerful, too, since it lived long enough to attack Juza down to 9. On Juza's turn, he was able to animate a Creeping Tar Pit, so Watanabe's Jace, the Mind Sculptor finally died. But the Abyssal Persecutor was still ruling the skies, and after another turn, Juza was at 3 and Watanabe had a pair of Calcite Snappers.

Juza Preordained. Watanabe did math. And there's nothing more frightening in a high-level Magic match than your opponent doing math. He activated a Creeping Tar Pit and sent it and the Abyssal Persecutor into the Red Zone. Juza tried to Disfigure the Creeping Tar Pit, but Watanabe had a Mana Leak. Rather than fight over it, Juza played another Disfigure. Watanabe had a Spell Pierce, but Juza chose to pay the mana. The Creeping Tar Pit died and the Abyssal Persecutor took Juza down to -3 life—but also kept him from dying. Now, how was Watanabe going to deal with the clause preventing him from winning the game?

Juza cast his third Inquisition of Kozilek of the game. Watanabe's hand held two cards he could target: Spell Pierce and Doom Blade. And it had one card that Juza was helpless to affect: Jace, the Mind Sculptor. And since Watanabe was clearly going to cast Jace and use the -1 ability to return his Abyssal Persecutor to his hand, Juza conceded the game and they shuffled up for Game 2.

In this game, Watanabe cast a discard spell of his own, but it was Duress, rather than the Inquisition of Kozilek that Juza had been using. As a result, Watanabe was able to knock Jace, the Mind Sculptor out of Juza's hand early on. He was also able to Mana Leak Juza's early Sea Gate Oracle, then play a Calcite Snapper to threaten an attack.

Juza played a Tectonic Edge, which he used to destroy a Tectonic Edge on Watanabe's side of the table. Watanabe started to hit land and send the Snapper across as a 4/1, getting Juza down to 10. Juza just took the damage and played various lands. Finally, he'd had enough. He used a Tectonic Edge to wipe out Watanabe's Creeping Tar Pit and cast an unexpected creature: Vampire Nighthawk! Watanabe tried to Cancel it, but Juza was ready with a Mana Leak.

Watanabe played a Mimic Vat, but when Juza cast a Grave Titan, it was clear that the game was over. Watanabe conceded. 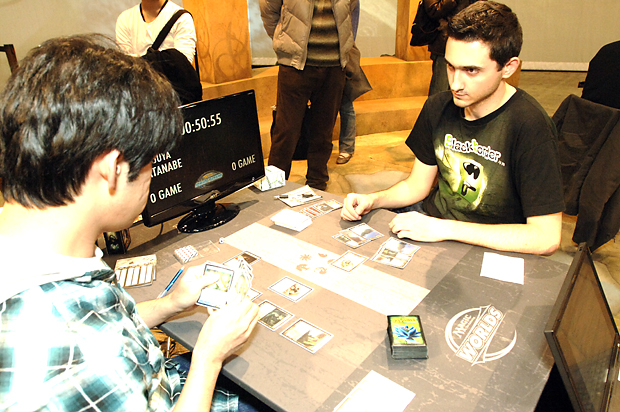 Yuuya Watanabe and Martin Juza, the players in the match you're reading about right now.

This time, Juza's early discard spell was a Duress, but there was no Jace to affect. He chose to eliminate Watanabe's Mana Leak, leaving him a Duress of his own. Watanabe started more aggressively than he had in the previous two games, with a pair of Darkslick Shores leading to Vampire Hexmage. He followed that up with a Calcite Snapper and got in for two.

Juza had a Sea Gate Oracle, but Watanabe had a land to power up his Calcite Snapper. He activated a Creeping Tar Pit and attacked. The Calcite Snapper traded with Juza's Sea Gate Oracle, and the Creeping Tar Pit did its damage. Watanabe used his Duress and got rid of a potential counterspell. But it couldn't affect Juza's Vampire Nighthawk, which he cast on his turn.

Watanabe played a Misty Rainforest, turned it into a regular land, and paused. Juza asked him, "Jace? Persecutor? Attack?" The answer to the third question was "Yes, with a Creeping Tar Pit." Juza went down to 12, but his Vampire Nighthawk brought him right back to 14. This went on for a few turns, with Juza staying at 12 (or 14) and Watanabe ticking down to 15.

Juza played Jace Beleren and drew a card with it. Watanabe sent a Creeping Tar Pit into Jace, killing it. The Vampire Nighthawk took Watanabe down to 13. Then Watanabe had a Grave Titan of his own, which brought with it two Zombies that looked suspiciously manga-ish. Juza responded with his own Grave Titan, which brought Kai and Gabriel along with it. 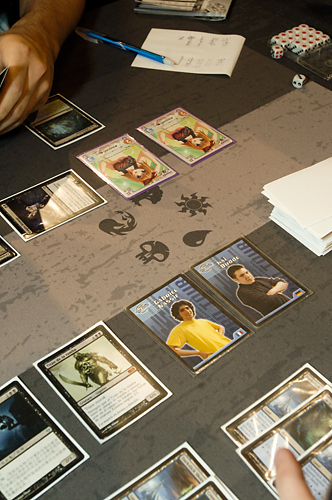 The game had clearly come to a dramatic point. Watanabe had a play: Volition Reins on Juza's Grave Titan, followed by a big attack. When the dust cleared, the only creatures in play were all on Watanabe's side: the Vampire Hexmage, two Zombies, and Juza's Grave Titan.

Juza Duressed Watanabe and saw two Spell Pierces, which he soon reduced to one. He cast a Jace, the Mind Sculptor and bounced the Grave Titan back to his hand.

Juza knew that one of Watanabe's two cards was Spell Pierce, and the other one was freshly drawn. He cast Sea Gate Oracle and discovered that the unknown card in Watanabe's hand was Cancel. Juza forced through the Oracle with Mana Leak, but his time was short. Watanabe used Tectonic Edge to destroy Juza's Creeping Tar Pit, then activated his own Pit and attacked with it and both of his Zombies. Juza extended his hand.