2010 Magic: The Gathering World Championships Round 6: Body and Mind

Chikara started things off right away by casting a Goblin Guide and bashing in for 2. His opponent had yet to do so much as play a land and was already at 18. Dave attempted to slow the pace of things down with an Overgrown Battlement, but his opponent was ready with Journey to Nowhere to exile the 0/4, attacking with the Guide and a Spikeshot Elder. 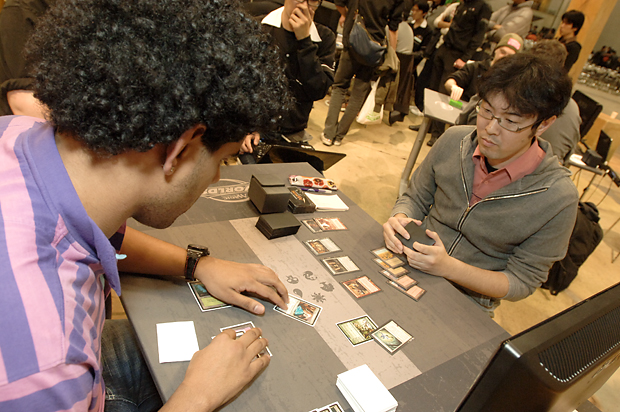 A second Battlement from Williams failed to block an Adventuring Gear–equipped Spikeshot Elder due to a missed land drop. He needed to keep the Wall available to use as a mana source, but that meant Chikara was able to use a Marsh Flats to bash David to 7. When Williams missed his third land drop for the second turn in a row, Nakajima was able to use Sword of Body and Mind to force his Elder all the through for lethal in a game that took under ten minutes and saw approximately a half dozen spells cast in total.

The second game provided plenty of land for David Williams, who was also able to start off with a second-turn Joraga Treespeaker. Unfortunately for his blue-green Genesis Wave deck, he immediately lost the 1/1 to a Journey to Nowhere from Chikara Nakajima. Still, the pace of the game was definitely much better for David than it had been in the first. After all, approaching the third turn of play his aggressive opponent had yet to cast a creature, while Williams had come up with a Tumble Magnet to slow any attacker down.

Nakajima was ready for a tricky play to work around the Magnet. He cast Cunning Sparkmage, which was immune to the faux Icy Manipulator, being able to simply tap in response. A Garruk Wildspeaker for Williams forced Chikara to use his Sparkmage on the planeswalker, saving the American precious life points. A Stoneforge Mystic hunted up Basilisk Collar for the Japanese player's aggressive deck, and when both spells resolved Nakajima revealed they had been tests all along: he really wanted to cast Lightning Bolt to take out Garruk. The ploy worked, and David untapped for his fifth turn with only the Tumble Magnet accompanying his lands.

Still set on the planeswalker plan, David cast Jace, the Mind Sculptor and used it to scry. That was a play no doubt intended to protect his powerful card from being burned to oblivion, and the powerful blue card forced his opponent to spend his turns attacking it instead of Dave's life total. That bought him the time he needed to cast a Frost Titan, the 6/6 locking down Cunning Sparkmage. 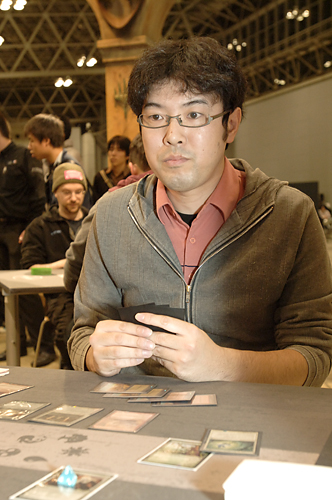 Chikara Nakajima co-stars in this picture, with a cameo by Michael Jacob's hat.

Chikara had not been able to pressure his opponent throughout the second game, and now found himself staring down a possible win condition. He added to the board, casting more Squadron Hawks and finally a Spikeshot Elder. He used a Basilisk Collar to equip his Elder, then attempted to shoot the Titan. Williams calmly pointed at its triggered ability, countering Chikara's attempt unless he paid

. Realizing he only had one mana left with which to pay, Nakajima burst out laughing at his own mistake. Williams, in a tight match, remained stoic, casting a second Garruk Wildspeaker and Tumble Magnet to continue clearing the way for his Titan.

The misplay with the Collar proved too much. A turn later Chikara found himself trying to keep up with the Titan and a Beast token from Garruk, but having missed his opportunity to kill the Titan he succumbed to his opponent's creatures, evening the match at one game each.

Basilisk Collar led the way for the red-white deck in the second game, but it wasn't joined by a creature until Chikara cast a Cunning Sparkmage on the fourth turn. David was busy using an Overgrown Battlement to accelerate out Obstinate Baloth, but he lost his Wall to his opponent's Sparkmage wearing the Basilisk Collar. A Squadron Hawk gave Chikara a miniature army, while Dave worked on building his mana base via Joraga Treespeaker. 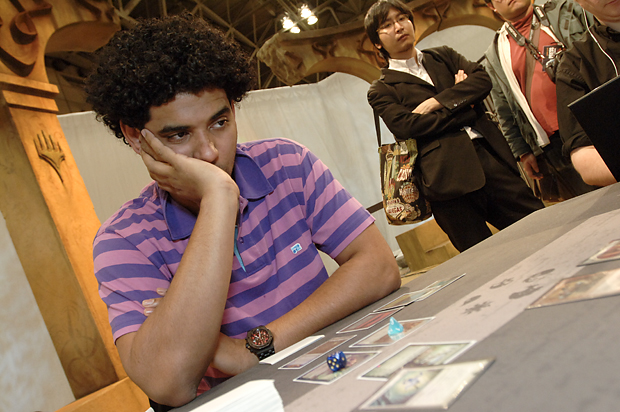 So the bartender says, 'Why the long face?'

The aggressive player cluttered the battlefield with permanents, casting Stoneforge Mystic and more Squadron Hawks, then a Stoneforge Mystic to tutor for Sword of Body and Mind. David cast an Acidic Slime to knock down his opponent's Basilisk Collar, freeing up his green creatures to not live in fear of Cunning Sparkmage. Unfortunately for the American he didn't have an immediate solution to his opponent's Sword, taking a hit from it and giving Chikara a free Wolf token. With only the Obstinate Baloth sitting defense, David tried to draw a solution to the growing army sitting across from him.

Instead he passed the turn after drawing, taking a second hit from the Sword and falling to 8. The Equipment proved to be too much; another draw from his deck didn't yield a miracle and he frustratedly reached for the match slip in a sign of concession to his opponent.

3 Koth of the Hammer 2 Refraction Trap