2010 Magic: The Gathering World Championships Round 7: You Must Craft Metal, or Metal Will Craft You

One of the all-time great Magic nations, France has produced three Hall of Famers and multiple Pro Tour champions. Two of those champions sat down to face one another in the round 7 feature match at the 2010 World Championships in Chiba, Japan. Their names? Guillaume Wafo-Tapa and Pierre Canali. Both had had monster first days and found themselves drafting the Scars of Mirrodin format at Table 1 to begin competition Friday morning. 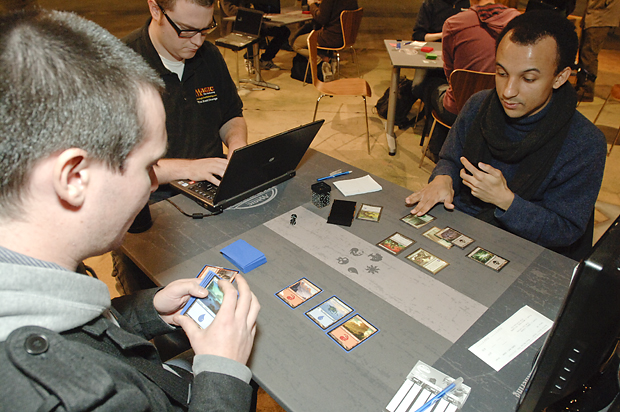 Blight Mamba led the way for Guillaume, his black and green mana base strongly indicating he was playing the popular poison/infect strategy. An Ichor Rats joined his 1/1 Snake while across the table his opponent mustered an Embersmith with which to trade by blocking the Rats. A Contagious Nim hit the battlefield for Wafo-Tapa to reload while his opponent had Argent Sphinx, well short of metalcraft to see it fully powered but happy to have a solid 4/3 flyer for the low price of just four mana. 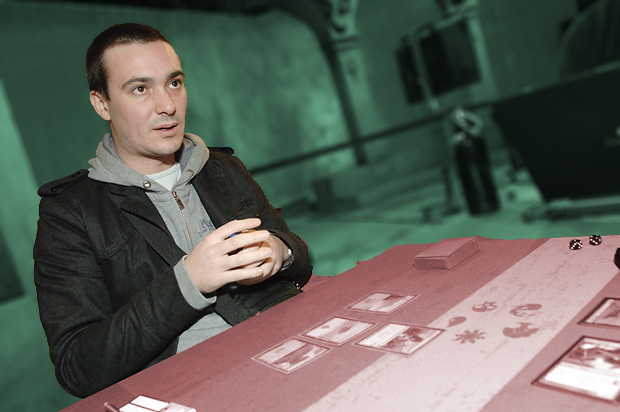 Pierre Canali is back after a quiet Pro Tour period, with no less charm (but not quite as much hair).

The Sphinx stopped the spread of disease from Guillaume and bought Pierre time to build an offense of his own. It started with Barrage Ogre, the beefy 3/3 leaving the Frenchman feeling confident enough to attack with his Sphinx. After that he had Liquimetal Coating and Necrogen Censer, the former allowing him to turn any permanent he controlled into a combustible object for his Ogre to throw. The tandem of artifacts also allowed him to gain metalcraft, a fact that granted him the ability to clear his Argent Sphinx of some -1/-1 counters it had picked up from blocking his opponent's creatures.

The 4/3 Sphinx bashed Wafo-Tapa to 8 life, Guillaume meekly casting a Tangle Angler as riposte. Clone Shell for his opponent made sure the ground was too gummed up for the poison player to get through, and facing a lethal attack from the Sphinx combined with Barrage Ogre activations, he conceded.

Pierre Canali started off the second game far more aggressively than he had the first, casting an Oxidda Daredevil on the second turn, then a second copy one turn later. At four mana he found his Argent Sphinx and in the blink of an eye had dumped 8 points worth of power onto the battlefield. Poor Guillaume, meanwhile, had gambled on a hand featuring two Swamps, but had failed to draw a third mana source. That meant he couldn't cast any spells and had been forced to discard for a turn. 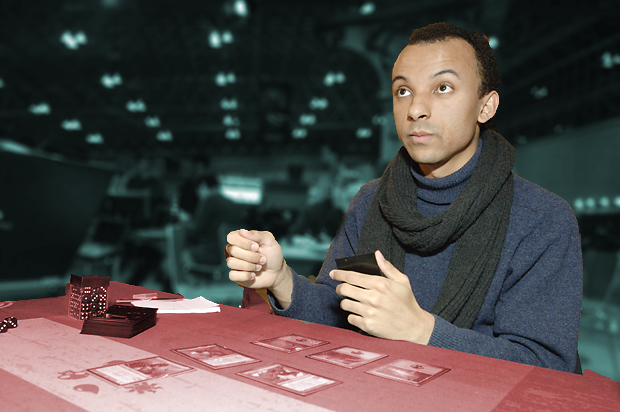 Wafo-Tapa has a reputation for playing control even in draft, but his aggressive infect deck bucks that trend.

A Saberclaw Golem added to Canali's lead on the board, but Wafo-Tapa finally managed to draw a Forest and used it to cast Cystbearer. That shut down his opponent's 2/1 Oxidda Daredevils, and a turn later Guillaume came up with a second Forest to enable Tangle Angler. Unfortunately for the champ, he was still taking 4-point swings from his opponent's flying Argent Sphinx.

Smelling blood in the water, Canali ignored his opponent's blockers and sent his entire team to the red zone. The swing took Wafo-Tapa to 2 life, and postcombat, Canali revealed a copy of Arc Trail in his hand to finish the job. Wafo-Tapa's mana screw proved too much for him to fight back in the second game, and he found himself dead in the match to his fellow Frenchman.