2010 Magic: The Gathering World Championships Round 8: The Dragon ... Slayer?

Going in to Round 8, there were but three players left with unblemished records. Brian Kibler is among a select group of people to have won a Pro Tour after a perfect day one. Interestingly, of the other three players to have achieved such a feat, one of them, Pierre Canali, also currently sits undefeated. 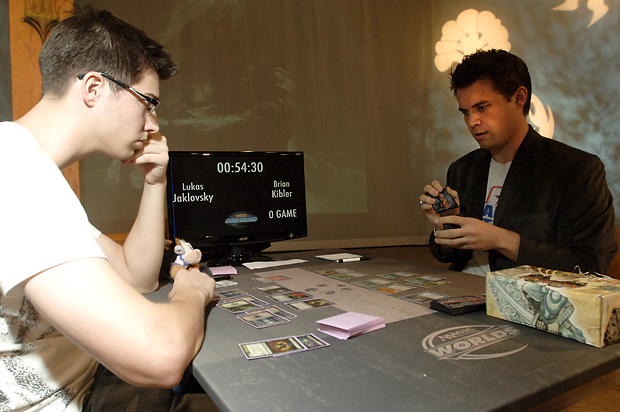 Any epic match-up between Kibler and Canali would have to wait, though. Before that, Kibler was up against Lukas Jaklovsky, who had a strong green-black deck—something that Kibler knew about, having passed him a Putrefax.

Jaklovsky led with a Carapace Forger and Bladed Pinions, while Kibler had Gold Myr to accelerate into a turn-three Chrome Steed. A Grasp of Darkness offed the steed, but it was soon replaced, first with a Perilous Myr, then Riddlesmith and Vedalken Certarch.

Jaklovsky cast a Contagious Nim and seemed happy to trade his Carapace Forger for Riddlesmith. It soon became clear that he was not worried about winning in any way other than poison, as he dropped Skithyrix, the Blight Dragon onto the board. While the Dragon Skeleton was not going to be able to get past Vedalken Certarch in the short term, in the long term it represented a major threat to Kibler's life (if not his life total).

Kibler cast first a Saberclaw Golem, then a Sky-Eel School, building up a hefty board. He looked a little disheartened when Skinrender took out his Certarch, but replaced it with a Grand Architect. Kibler could not afford to wait back on his plays, and started swinging. Grand Architect allowed a little more punch for Kibler's squad, and he had a Snapsail Glider back to block the Blight Dragon.

Jaklovsky was on just 7 life in short order, forced to hold back an equipped Contagious Nim to block. Bladed Pinions is quite the combo with infect creatures, as the first strike it imparts makes it doubly tough to engineer trades for opponents. Kibler was well aware of this, and particularly careful of his poison total, as he knew about the Putrefax. 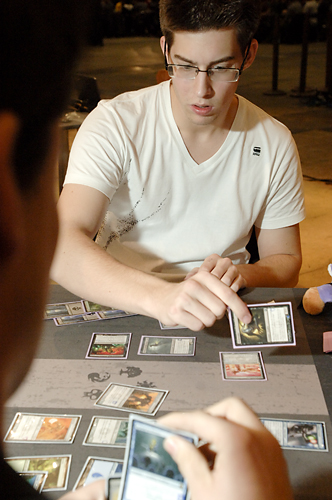 Kibler made a big swing with his team, and while Jaklovsky was valiant in his attempts to defend, the combination of Myr, blue mana and Grand Architect made it hard for him to effectively stop the assault. It was only a matter of time before Jaklovsky scooped up his cards and went to the sideboard for Game 2.

Both players tweaked their land base for Game 2, appealing to this reporter for lands, which he fortunately had in his pocket following a successful evening's drafting from the previous evening. Miraculously, even the greedy Kibler request of a specific Forest art was somehow possible. Who needs land stations?

Jaklovsky's start of turn-three Cystbearer seemed fine, but it paled in comparison to turn-two Riddlesmith, turn-three Grand Architect plus Chrome Steed from Kibler. Jaklovsky passed on turn four having only played a land and attacked for two poison counters.

"Let's see what happens here then," remarked Kibler as he cast first Gold Myr, then Vedalken Certarch and Golem Artisan, even having the mana to give the Artisan haste. He got stuck right in and attacked.

At this point, Martin Juza wandered over to spectate. "Kibler's showboating ... I wonder who's winning?

"Well, I also showboat when I lose," countered Kibler, grinning, "but yes, I am winning."

At the end of turn, Jaklovsky cast a Carrion Call, and followed up on his turn with Skithiryx, the Blight Dragon. Again Vedalken Certarch was there to laugh in the face of the mythic rare, but Kibler had to chump-block a little with Myr, turning off his metalcraft. Even doing this, he rose to five poison counters, a dangerous amount if there were any copies of Untamed Might in Jaklovsky's deck. Kibler's plan for the big poisonous Dragon had to be to give his remaining artifact creatures flying with Golem Artisan to keep him safe.

With Jaklovsky tapped out on 13, and just Skithiryx to block, Brian was 1 point short of the win on the board, and as such just went in with Golem Artisan, for 5 points. No matter which way he did things, Lukas was in a bit of trouble. 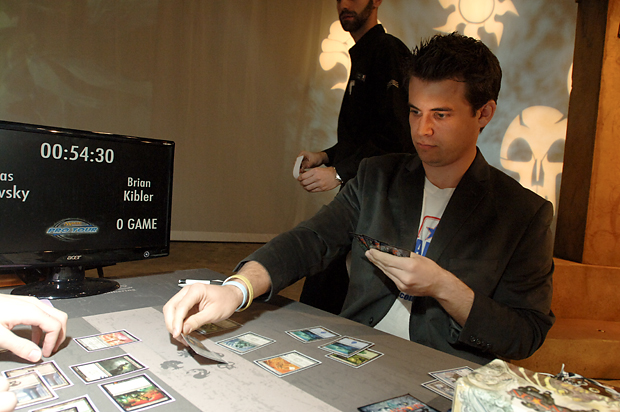 When Skithiryx attacked alone, Kibler jumped his Chrome Steed in the way with Golem Artisan, and pumped it to the point that Jaklovsky would be forced to pay mana to regenerate. The swings back from a big Golem Artisan were enough to end things.