“This is my first ever feature match!” Christopher Wolf announced, nervously eying up his opponent, clearly aware that Paulo Vitor Damo da Rosa was the reason he was sitting under lights of the feature match arena. 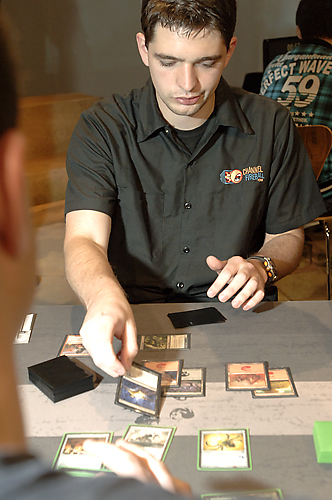 Both players kept their opening hands, and Wolf lead with Ichorclaw Myr, while Damo da Rosa responded with an Embersmith. A potential wrecking ball, Wolf wasted no time dropping a Contagion Clasp on the ‘Smith, as he landed his first poison counter on Damo da Rosa. A Necrogen Scudder replaced the Embersmith, the life loss barely noticeable when faced with an infectious opponent. Wolf cast a Lifewire Lash, but when he moved to equip his Ichorclaw Myr, Damo da Rosa had a Grasp of Darkness to keep the Lash at bay. Wolf followed up with a Cystbearer, so Damo da Rosa pulled the trigger on a Shatter to take down the Lash permanently.

By now, Damo da Rosa’s Scudder had attacked enough that Wolf’s life total had been practically halved. The Scudder was joined by a Dross Hopper. Needing to get back in the game, an Accorder’s Shield bolstered the ‘Bearer before it was stymied by a Darksteel Sentinel for a couple of turns. As Wolf fell to 5, he summoned a Golem Artisan. Damo da Rosa summoned and dismissed a Moriok Replica in favor of a few more cards, while Wolf had a Sylvok Replica of his own.

The Scudder attacked again, this time meeting the Artisan half way across the table. With only one of Wolf’s many Forests open, Damo da Rosa was happy to trade, but Wolf had the Withstand Death. His route to victory finally dealt with, Damo da Rosa replaced it with a substantially more threatening Carnifex Demon. With Wolf on 5 life, to Damo da Rosa’s 15 and a single poison counter, things were looking somewhat one-sided. The only thing saving Wolf from death was the Golem Artisan, so Damo da Rosa [autocard Turn to Slag]Turned it to Slag, and they were off to Game 2. 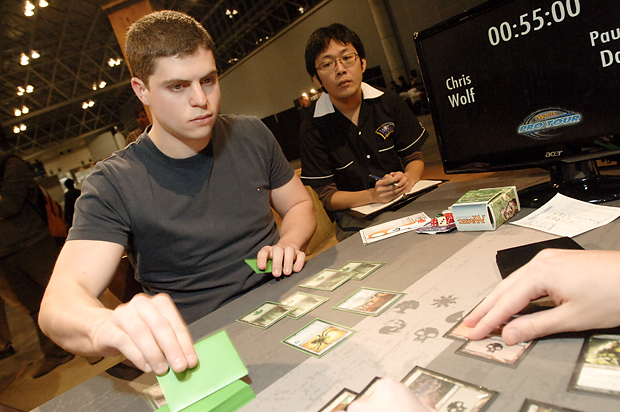 After some extensive sideboarding to add blue to the mix, Wolf began Game 2 with a mulligan to five. Both players again managed to start out with Ichorclaw Myr and Embersmith, but this time Wolf was not fortunate enough to have a Clasp ready for the ‘Smith. Damo da Rosa summoned a Moriok Replica and got in for 2, while Wolf made up for his third turn of nothing with a Trigon of Corruption. A second Replica for Damo da Rosa allowed the Smith to shoot down the Myr, and to get Damo da Rosa’s team through for 4. Wolf summoned his Golem Artisan, but a Myr Propagator helped the ‘Smith ping it, so that Wolf was reluctant to block with it, falling to 8. The Trigon finally took out the Embersmith, but with little else to stem the tide of Damo da Rosa’s attack, it was all over for the first-timer.