Love Janse, bearer of the Swedish Fish (Shark, actually) of Triumph, is in the Top 4 of the World Championships—and his very first Pro Tour. Conceivably, he could win Rookie of the Year by finishing well enough today. His opponent has the somewhat greater experience of the two. Guillaume Wafo-Tapa has won a Pro Tour in Japan before, in Yokohama. This time he is playing for a World Champion title with a deck he piloted to a 6-0 finish in the Standard portion of the event.

Guillaume led with Duress, seeing two Primeval Titan; Overgrown Battlement; Emrakul, the Aeons Torn; and lands—nothing that he could take. Of those lands, there were some pretty nice ones, including Tectonic Edge and Eldrazi Temple. That Battlement soon came down, and Janse followed up with a Growth Spasm, getting Janse well toward being able to cast Primeval Titan well early. 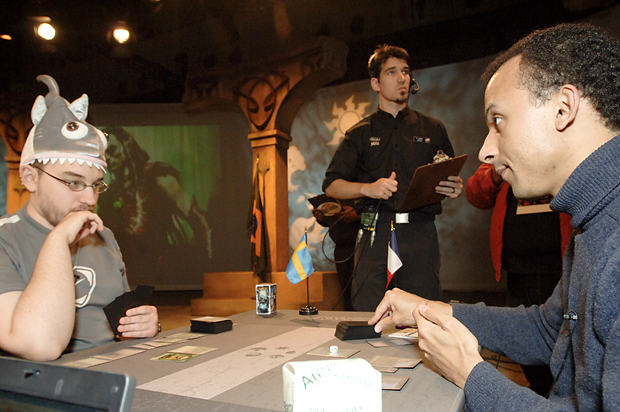 Sweden's Love Janse and France's Guillaume Wafo-Tapa face off in the semis.

An Inquisition of Kozilek whiffed, seeing just Forest, those two Titans, and Emrakul, the Aeons Torn. Janse seemed happy enough with that, and even happier for his first Titan to resolve without incident. He fetched a pair of copies of Eldrazi Temple with it, suddenly getting very close to Emrakul mana. That was enough for Guillaume, stuck on 3 lands, to nod his head and scoop up his cards. It was on to Game 2.

Game 1 took less time than the sideboarding and shuffling for Game 2. It was again all about Janse in the early game, resolving an Explore to get ahead on the land count, and then an Oracle of Mul Daya, revealing an Everflowing Chalice on the top of his deck. Wafo-Tapa killed the 2/2 with Disfigure at the end of turn.

Jace, the Mind Sculptor came next from Wafo-Tapa, immediately putting that Everflowing Chalice from the top of Janse's deck to the bottom. Janse seemed unrattled by the Planeswalker. He cast a second Oracle of Mul-Daya, then played the Khalni Gardens from the top of his deck, before another land and a pass. 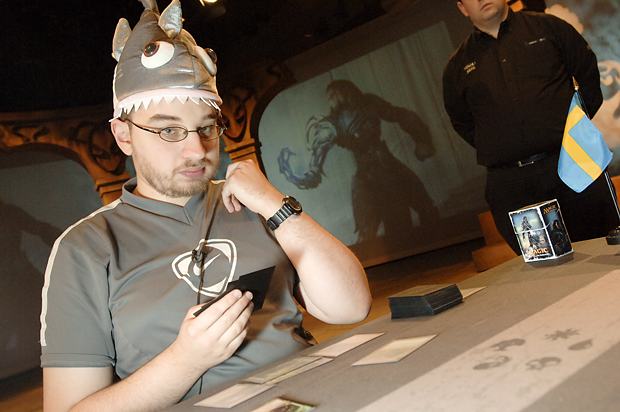 Love Janse has made it this far, but can he topple the Wafo-Tapa wall?

Wafo-Tapa used Jace to Brainstorm, then cast Memoricide to remove the Primeval Titans from Janse's deck and check out his sideboard plan. It proved a timely decision; there were a pair of Primeval Titans in Janse's hand, along with Eldrazi Temple and Ulamog, the Infinite Gyre. After the shuffle, there was a Joraga Treespeaker on the top of Janse's deck. After his draw, there was an Eye of Ugin up there, which Janse immediately played. Oracle of Mul Daya worked on keeping down Jace a little before the Treespeaker came down for Janse, and leveled up to level 3.

Wafo-Tapa had a Doom Blade, to make all that leveling up on the Treespeaker seem unnecessary. He had another to kill off the Oracle. With Wafo-Tapa low on mana untapped, Janse used his opportunity to cast Summoning Trap, but only got an Overgrown Battlement for his trouble. Wafo-Tapa bounced the wall, before casting a Grave Titan.

Now that the French player was the one with a threat on the board, the whole face of the game changed. A Spreading Seas took away the threat of Eye of Ugin. Doom Blade cleared the wall out of the way, and Wafo-Tapa was coming out swinging. Ulamog, the Infinite Gyre killed the Titan, but it had already done part of its job, making four zombie tokens. Wafo-Tapa bounced the Eldrazi on his turn rather than face the annihilator, and cast a second Grave Titan. From here the indestructible 11/11 just wasn't good enough, and Janse scooped up his cards.

Janse had some acceleration in the form of Everflowing Chalice, but was left with no access to coloured mana (or at least useful) coloured mana when his Forest was hit by Spreading Seas. A Khalni Garden met Tectonic Edge, and it seemed that Wafo-Tapa might be able to parlay his opponent's mana issues into a win.

A topdecked Forest changed all that. It allowed for Oracle of Mul Daya and a second Forest, revealing an Explore on the top of his deck. The Oracle was soon hit by Disfigure from Guillaume, who resolved another Memoricide on Primeval Titan, taking one in Janse's hand and the rest from his deck. It also showed three Summoning Trap and Oracle of Mul Daya still to be sat, ready to cast. 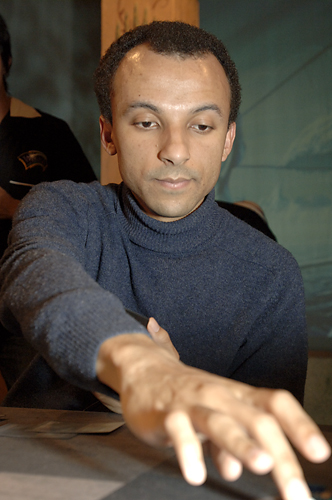 Formats come and go, but Wafo-Tapa's dedication to control is nearly as unwavering as his expression.

Guillaume wasn't going to sit back forever. He cast a Grave Titan, in readiness for entering the red zone. There was not much love on the top of Janse's deck, and thanks to Oracle of Mul Daya, everyone knew it.

The Titan began to swing with its team, and when an Explore was countered by Wafo-Tapa, that was enough for Janse to scoop up and move on.

The acceleration plan for Janse in Game 4 began with Everflowing Chalice for 1. It followed with a Growth Spasm, which was countered, and no third land. When Duress came from Wafo-Tapa, he saw Ulamog, Primeval Titan, Explore, Growth Spasm, and Summoning Trap. The Explore went, and a second Growth Spasm was countered. Wafo-Tapa had no intention of being the one to miss land drops, and cast a Jace Beleren to keep his hand fueled.

Janse finally got things moving with a resolved Explore, and a Khalni Garden, but by this point, Wafo-Tapa was ready to Memoricide away Primeval Titan. Janse's hand was now Explore, Ulamog, and Summoning Trap. With four mana available, only one of these looked particularly castable to Janse.

The Explore found the Swede a land, but he still seemed pretty far behind. Wafo-Tapa used the last counter on Jace Beleren to draw a card and replaced it with Jace, the Mind Sculptor. He used the Brainstorm ability, before playing out a fetch land to engineer the shuffling away of bad cards. He had a Tectonic Edge all ready to keep Janse off mana, but it wasn't as good as it could have been, as Janse cast an Oracle of Mul Daya and then hit two lucky lands off the top, revealing a Tectionic Edge for next turn.

After a little thought, Wafo-Tapa played Spreading Seas on Eye of Ugin and passed. He had a Doom Blade ready for Oracle of Mul Daya, and another ready for when Janse cast and leveled up a Joraga Treespeaker. A second Memoricide took Summoning Traps out of Janse's deck, leaving Janse with a hand of just Ulamog, the Infinite Gyre.

It was time for Jace, the Mind Sculptor to start fatesealing Janse with his +2 ability. Wafo-Tapa had a Grave Titan to follow, and a Mana Leak ready for Ulamog (though he could not stop it from killing off his Grave Titan). 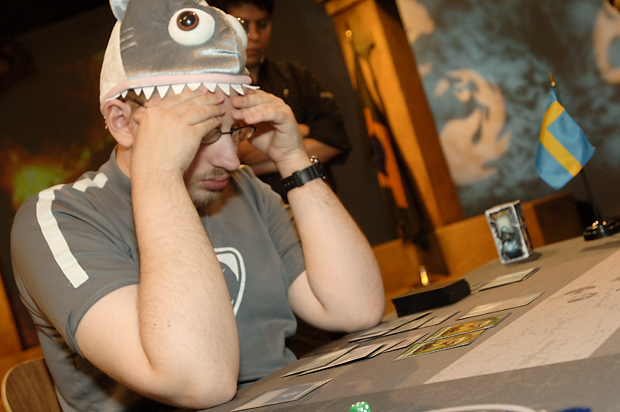 When Ulamog isn't enough: Love Janse feels the jaws of defeat closing around him.

Jace continued to fateseal, going up to 7 counters. Oracle of Mul Daya was deemed safe to leave on top, and Wafo-Tapa got in some attacks, to take Janse to 13 life. Wafo-Tapa was perilously close to the victory now, and used Jace to Brainstorm. He found a Doom Blade for the Oracle, and a Spreading Seas for Mystifying Maze. Another Grave Titan sealed it.

Guillaume Wafo-Tapa defeats Love Janse 3-1 and advances to the Finals!