The Extended match in the World Team Finals saw Robert Jurkovic of the Slovak Republic match up his Faeries against the Pyromancer Ascension list of Jeremy Neeman, a potentially tough match for the Australian.

Jurkovic had to be pretty happy with how his Extended match started, as Thoughtseize snagged a Pyromancer Ascension from Neeman's hand. It left Lightning Bolt, Preordain, Manamorphose and See Beyond, along with a Scalding Tarn and Cascade Bluffs. 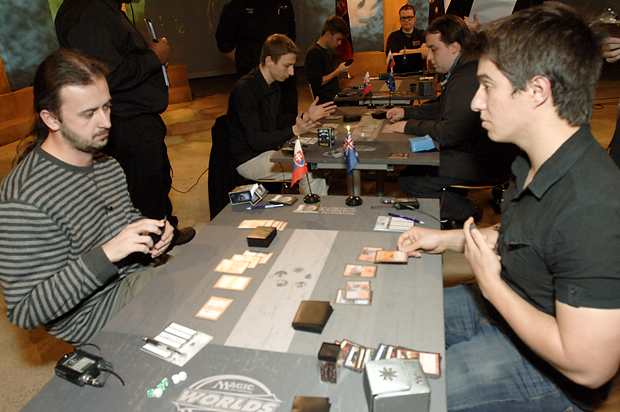 Robert Jurkovic of the Slovak Republic and Jeremy Neeman of Australia battle it out alongside their respective teams.

Neeman was quick to cast his card drawing spells, including cantripping Manamorphose into See Beyond. A Broken Ambitions stopped that, and milled Neeman for four (something he may not have minded). What he was probably slightly more troubled by, though, was the second Thoughtseize, which snagged a second Pyromancer Ascension. Neeman kept digging with Ponder—he was still on just two land, while Jurkovic had quickly risen to four mana available. Another See Beyond came from Neeman, and this time it resolved.

Jurkovic had mana up, even with attacks coming across from his Mutavault. A Scion of Oona met a Lightning Bolt from Neeman, and Mutavault a Burst Lightning. Neeman then tried for Pyromancer Ascension. Jurkovic had Mana Leak. Neeman did too. Jurkovic had another, meaning that three of the four copies of Pyromancer Ascension in Neeman's deck were used up. Jurkovic was ready to go on the attack. He cast first a Vendilion Clique to filter his own draws, and then a Bitterblossom.

When Neeman cast his fourth Pyromancer Ascension, it met a sigh from Jurkovic. Could he really lose from the position of strength he'd been in all game? Neeman passed. Jurkovic ran in with his team. Neeman had ... nothing. He scooped up his cards having run out of gas just a little too soon for the comeback. 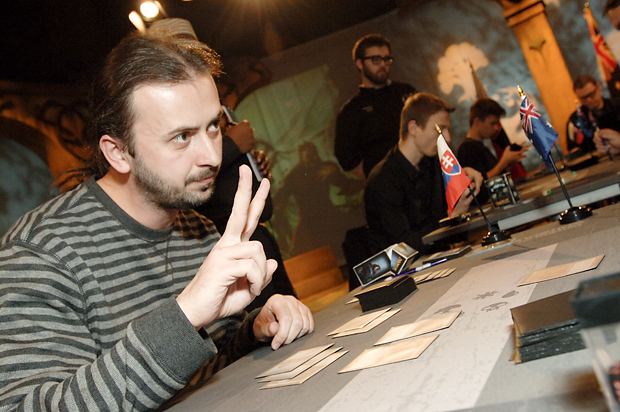 Neeman's first spell was a Ponder, which Jurkovic tried to stop with Spellstutter Sprite, with the Sprite's ability on the stack, Neeman targeted it with Burst Lightning. Jurkovic then used a Peppersmoke on it, so that he would at least get a card. Ponder finally did its thing, and gave Neeman some much needed options on cards.

When Jurkovic went for a draw step Vendilion Clique, Neeman played a clutch Jace's Ingenuity before he lost the option to. He looked on as this allowed a Jace, the Mind Sculptor to resolve, having the Cryptic Command to bounce it and draw later.

One interesting element of the sideboarded games in this matchup is that Neeman has the option to sideboard into a Pestermite / Splinter Twin kill, which does not need to worry about graveyard disruption, or keeping permanents on board for any length of time. In sideboarding, Jurkovic had to respect this as a possibility, hence the Peppersmoke seen in Game 2.

Jace, the Mind Sculptor from Jurkovic was a far bigger game than Peppersmoke on his own. He came down through a Mana Leak, thanks to Jurkovic also having a copy of the 2 mana counter. Neeman was on the back foot, and cast first Jace's Ingenuity, then Ponder, looking for answers. He found one in Lightning Bolt, to kill Jace off in one shot.

With Neeman tapped out, a Bitterblossom was the next attack vector for Jurkovic. He let a See Beyond resolve, and took a little time to update his teammates on his position. The last match going, Jurkovic now knew that he was in the decider. If he won this game then the Slovak Republic would be the World Team Champions. Neeman's Ponder also resolved.

The Slovaks seemed happy to wait for team Australia to make a move. Bitterblossom was slowly building them an army—they didn't need to do anything. Australia did need to make a move, and the move was Pyromancer Ascension. Jurkovic responded with a Mistbind Clique, championing Bitterblossom. Neeman floated mana, and tried for a Burst Lightning. It was stopped by Spellstutter Sprite, but still helped trigger Pyromancer Ascension. A Preordain got the Ascension all the way, after which Neeman passed. 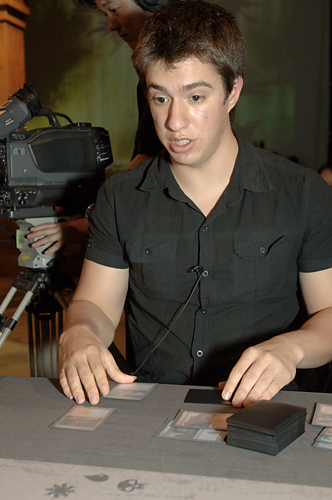 Jeremy Neeman is all that stands between the Slovak Republic and World(s) domination.

Cryptic Command bounced Pyromancer Ascension on Jurkovic's turn, and the attack that followed dropped the Australian to 4. He would have to do something decisive, as one more attack would be lethal.

Another Pyromancer Ascension came. Cryptic Command bounced Mistbind Clique and triggered the Ascension for one counter. That was all Neeman had, though, and he passed it back.

Attacks from Jurkovic put Neeman on two. Jurkovic replayed the Mistbind Clique on Neeman's turn, and that was enough to get the handshake.