When Ivan Floch and Adam Witton sat down in the Arena to represent the Slovak Republic and Australia respectively in the Finals of the National Team Competition at the 2010 World Championship, neither was sure how it would turn out. But they knew their teammates were counting on them to navigate the treacherous waters of Legacy successfully. The winner would be the team that won two out of the three matches, each of which was itself two out of three. Standard was on one side and Extended on the other, but the play area in front of Witton and Floch was what they had to win to bring glory to their respective countries. 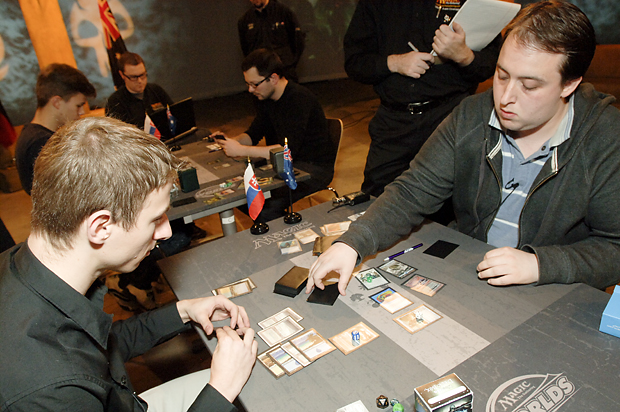 Slovak Republic's Ivan Floch and Australia's Adam Witton square off in Legacy, a format in which each team thought the other had the advantage.

Floch started with a Counterbalance on turn two, but Witton was ready with a Spell Pierce. Witton's second turn was no more productive, with his Coralhelm Commander quickly falling victim to Swords to Plowshares.

Witton did not have a land for his third turn, but he had an Æther Vial, which is nearly as good. He cast a Lord of Atlantis on his fourth turn, and the islandwalk could not have looked good to Floch, whose land base consisted of a Plains, an Island, and two Taigas. That was enough mana for a Jace, the Mind Sculptor, and he took a look at the top of Witton's deck.

Witton was allowed to keep whatever card was there, and he incremented his Æther Vial to two counters. He still had no land to drop, but he sent his Lord of Atlantis over to smack Jace, the Mind Sculptor around. With the Æther Vial, he put a Coralhelm Commander onto the battlefield, and then gave it two level counters with his two land.

Floch was possibly getting a little worried about the threat of unblockable Merfolk, so he cast Moat. But Witton didn't need land to cast Force of Will, pitching the humble Cursecatcher. Witton was reduced to one card in his hand, while Floch had two. Floch used Jace's Brainstorm ability and cast Sword of the Meek.

Witton incremented his Æther Vial to three counters. He paid full price for Silvergill Adept, showing his opponent Merrow Reejerey. Then he used the Æther Vial to put the Merrow Reejerey directly onto the battlefield. With his creatures getting bigger and bigger, he sent Lord of Atlantis and Coralhelm Commander into the Red Zone. When the smoke cleared, Jace had run out of loyalty and Floch was down to 14 life. Witton's last card in hand turned out to be a Wasteland, which he used to destroy one of Floch's Taigas.

Floch used Enlightened Tutor to find Engineered Explosives. Since Witton's hand was empty, he had to stand by and watch helplessly as Floch cast it with X equal to 2. When Witton attacked, the Engineered Explosives exploded as they had been engineered to do, destroying everything but the Merrow Reejerey. Floch fell to 12 on that turn, and 10 on the next. Witton played a Mutavault.

When the Mutavault was activated, it became all creature types, including, of course, Merfolk, giving it the benefit from the Merrow Reejerey. The ensuing attack dealt 5 damage to Floch, putting him at 5. The next attack killed him.

Between games, each player took a moment to consult with his teammates to give and receive advice on sideboarding and play decisions. 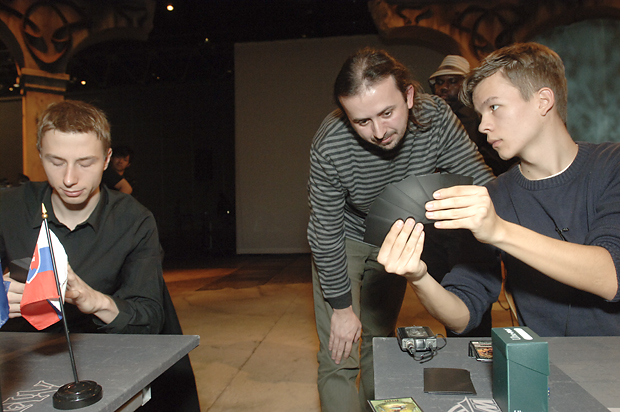 Witton had a more adventurous first turn. He started with a fetch land, which he turned into an Underground Sea. Then he cast Æther Vial, but Floch stopped him. Floch cast Force of Will, pitching a Jace, the Mind Sculptor, but Witton had a trick up his sleeve: he Dazed the Force of Will, returning the Underground Sea to his hand. With no land on the battlefield, but an Æther Vial ready to work, Witton passed the turn.

Floch cast a Thopter Foundry, and Witton incremented his Æther Vial. Then both players began to ride their one-mana artifacts, as Floch used Sensei's Divining Top and Witton put a Cursecatcher onto the battlefield, while incrementing the Æther Vial again. 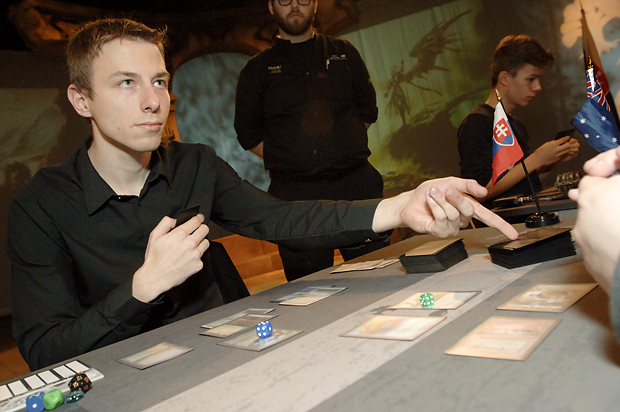 Floch gets the point.

Floch's antics with Sensei's Divining Top were filling his hand with Counterspells and Force of Wills. Unfortunately for him, Witton didn't need to cast spells from this point on. He used Æther Vial for Lord of Atlantis, which Floch had to exile with Swords to Plowshares. If you're Old School, that play looks like this: "StP LoA."

Witton played a Mutavault, then another one. He used Æther Vial to add a Silvergill Adept to the party, and was attacking for more and more each turn. Floch used Sensei's Divining Top, but all he found were ways to counter spells. Eventually he had to sacrifice the Top to Thopter Foundry just so he could have a chump-blocker. When a Merrow Reejerey hit the table, Floch cast Enlightened Tutor, hoping to find an answer. Witton Dazed it. Even though Floch could have used Force of Will to counter the Daze, there was no point. The game was over.