At the 2008 World Championships in Memphis, team Australia narrowly lost to a resurgent American squad starring Paul Cheon to miss their first chance at a Worlds team title. At the 2010 World Championships in Chiba, Japan, Ian Wood found himself a member of the Australia national team again in the Finals of the tournament, fighting for a chance at the title of team champion.

Sitting across the table from him in the Standard portion of the match was Patrik Surab, the youngest member playing on the Chiba Sunday stage. His nation, the Slovak Republic, was in the midst of one of its most successful Worlds weekends of all time. The last time they had had a similarly solid weekend was the last time the World Championships were held here in Japan. It was there that his teammates Robert Jurkovic and Ivan Floch failed to secure the title for their nation. Like his opponent, young Patrik was hungry to undo a previous wrong against his nation.

Surab's Blue-Black Control deck came out of the gates on the first turn with an Inquisition of Kozilek that forced a Joraga Treespeaker from his opponent's hand. Ian still had an Elf for his first turn, however, casting one of the Llanowar variety. A Sea Gate Oracle for the player from the Slovak Republic slowed down any attempts at early Elf beats and Wood found any form of early momentum stalled; on just the Elf, he was stuck on two lands and couldn't cast any spells from his hand. 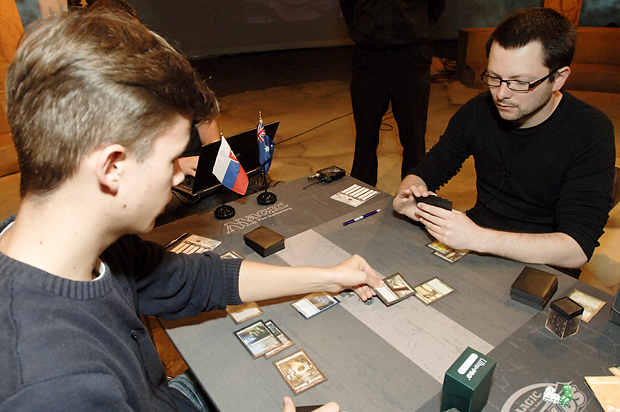 That meant his opponent was able to start capitalizing, using cantrips to dig up action like a Doom Blade, which Patrik used on Ian's 1/1. Nest Invader for Ian's mono-green deck helped him get back into things, but his opponent kept the cantrips coming by casting a Sea Gate Oracle. When the Australian finally found a third land and cashed in his Spawn token to attempt Garruk Wildspeaker, Patrik was ready with Mana Leak to counter. A turn later the control player had Jace, the Mind Sculptor and things looked very bad for Ian Wood.

The situation did indeed quickly deteriorate for the Australian. His opponent's planeswalker Brainstormed into a Grave Titan, then set its sights on the top of his library. As his draw step was fixed each turn by the Jace, he found himself continuing to struggle with mana. When a Creeping Tar Pit joined Grave Titan and multiple Zombie tokens in the red zone, the Aussie conceded and moved to the second game.

The second game of the match started a bit better for Ian Wood, who again opened on Llanowar Elves. This time he had an immediate follow-up, casting Nest Invader to further accelerate his mana base. Worried about the pace of that acceleration, Patrik Surab used a Disfigure on his opponent's Llanowar Elves to apply the brakes. Unfortunately for the control player, the ploy didn't work, as Ian still easily cast a Vengevine and promptly headed to the red zone with it. 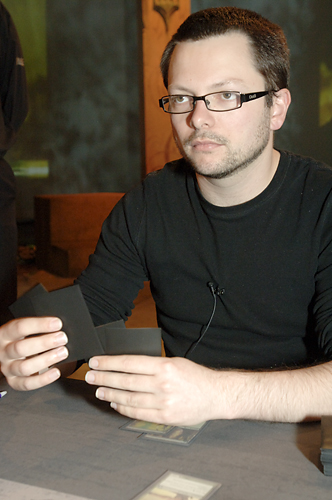 The Wonder from Down Under

Looking to stabilize, Patrik cast a Vampire Nighthawk on his third turn. The 2/3 deathtouch, flying, lifelink superstar was enough to cow Wood, at least for a turn, as he passed without attacking or casting any spells. In fact, Surab felt so confident he had wrested momentum from his opponent that he actually began attacking with his Nighthawk! Ian fired back, activating a Dread Statuary and sending in a smashing to drop his opponent to just 6 life.

The attack with the Nighthawk had been an overstep by Patrik, who, at precariously low life, was forced to keep the creature back to block a turn later. He cast a Ratchet Bomb to help out on controlling his opponent's board, but Wood showed no fear and sent his Vengevine and Dread Statuary to the red zone. The Nighthawk traded with the creature-land and post-combat Ian had a Llanowar Elves. A second Vampire Nighthawk hit for Surab and when his opponent cast an Eldrazi Monument he responded with Disfigure to take out Nest Invader. However, Ian was still able to attack the control player to 2 life, forcing him to make a powerful draw or lose to the Monument.

Jace, the Mind Sculptor was a powerful spell indeed for Patrik who used it to Unsummon his opponent's Vengevine back to his hand. That forced Ian to sacrifice Llanowar Elves to his Eldrazi Monument, at risk of losing the artifact entirely if he wasn't able to play some additional threats upon receiving the turn back. He did have additional threats, however, tapping out to recast Vengevine and attacking with the 5/4. That cleared the battlefield of the Vampire Nighthawk, and left Patrik at 4 life, but Ian with only one creature on the battlefield. 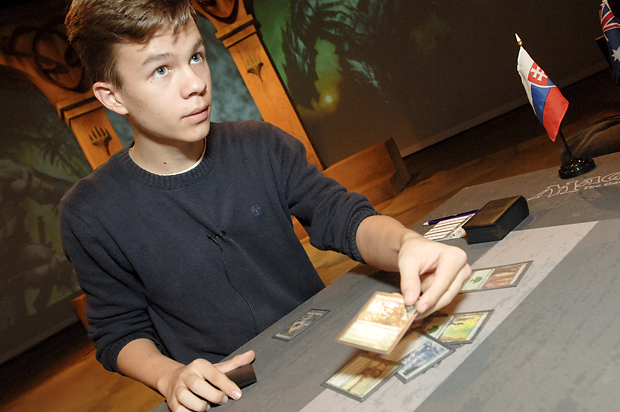 That creature, Vengevine, was sacrificed to Eldrazi Monument a turn later but Wood cast a Wolfbriar Elemental kicked three times. His opponent countered with Mana Leak, and for a moment it looked like Surab had wrested momentum in the game away from Ian. At the very least, he was doing a good job of stabilizing, but could he hold on to win? Jace shifted to Brainstorm duty and began putting Patrik's deck far ahead in the card count. The blue-black player began sending in a Creeping Tar Pit, using a second Mana Leak to counter a second Wolfbriar Elemental from his opponent.

Feeling confident, Patrik began using his planeswalker to fateseal his opponent. His creature-land continued getting in to the red zone and was joined by a Sea Gate Oracle. With the Jace keeping his draw step locked down, Ian found himself under the oppressive heel of his opponent's Tar Pit and in a few short turns of draw, go from the mono-green player, the Slovak Republic's Patrik Surab found himself the victor in his match.