Teams Round 2: Landslide
Poland vs. Australia

The match between the two top teams almost didn't happen at all. Poland was at Table 1 in plenty of time, but the three members of Team Australia barely made it before the round started. All was well, however, and both teams were arrayed across the table, ready for an epic battle, like so: 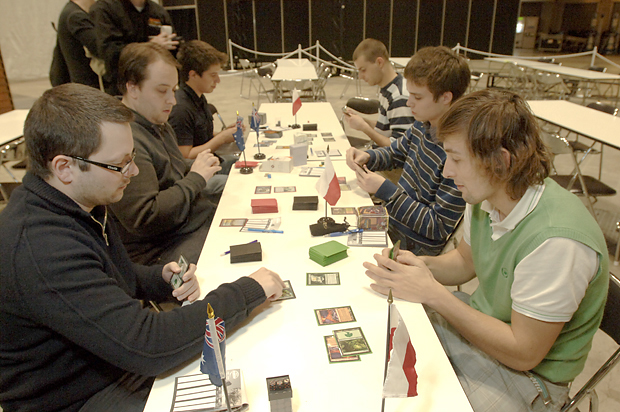 All three matches took place simultaneously, but we're going to describe them in a way that is hopefully more dramatically pleasing.

Wyspianski came roaring out of the gate with a Wild Nacatl, while Witton was committed to a more long-term strategy, basing his hopes on a pair of Æther Vials and a pair of Silvergill Adepts. He added a Coralhelm Commander, and even got a couple of level counters on it before Wyspianski killed it with a Lightning Bolt and improved his army to the tune of one Steppe Lynx. 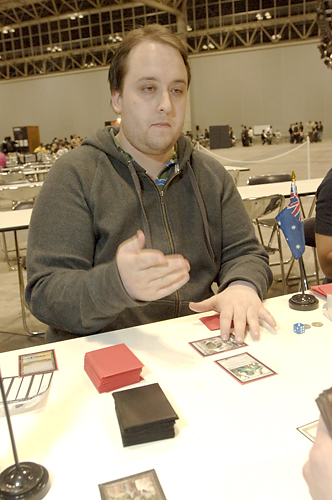 The two players traded attacks until each of them was at 6 life. Wyspianski waited until Witton had only one untapped Silvergill Adept as a blocker, then used Path to Exile to get it out of the way. The Wild Nacatl attacked, and a Lightning Helix finished the job.

In the second game of their match, Witton declared an Engineered Plague on Cats. This was bad news for Wyspianski's Steppe Lynx, although the Wild Nacatls were able to survive. It was also bad news for Witton's own Mutavault, which was doomed if it ever took on the form of a creature. 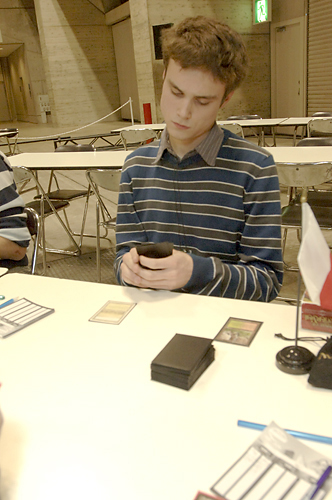 Wyspianski tried to add a Grim Lavamancer to his recruits, but Witton was willing to lose a Lord of Atlantis in order to Force of Will it. Wyspianski hit a living Lord of Atlantis with Chain Lightning, and had enough Lightning Bolts in hand to finish the job.

Pedrakowski made no secret of his game plan, starting the match with Khalni Garden and a pair of Valakut, the Molten Pinnacles. Wood was taking a more traditional path to victory with a pair of Leatherback Baloths. Pedrakowski was unable to get his machine going before Wood won the game.

In their second game, Wood started slower, with a Forest and an Arbor Elf. Pedrakowski had already played a Raging Ravine, and on his second turn, he killed the Arbor Elf with a Lightning Bolt and added a Valakut, the Molten Pinnacle. After that, he ignored Wood's development (Khalni Garden, Arbor Elf) in favor of playing a Forest, then promptly sacrificing it to Harrow for a Forest and a Mountain. 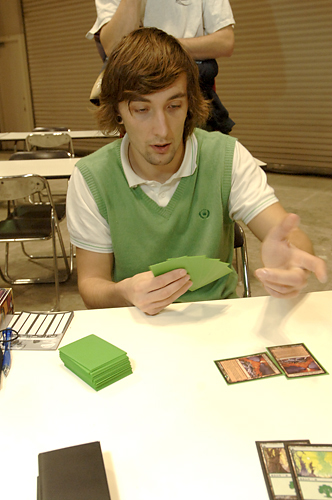 But when Wood cast a Vengevine, Pedrakowski had to start paying attention to the other side of the board again. At 11 life, he had a Forest, a Mountain, a Raging Ravine, and two Valakut, the Molten Pinnacles against a Nest Invader, two Plant tokens, an Arbor Elf, and a Vengevine. But was he worried? Well, maybe. But the point is that he didn't panic. He just played a Primeval Titan for a couple of Mountains. And on his next turn, he added an Avenger of Zendikar and his third Valakut. Rather than doing all the math, Wood conceded, and they were on to their third game.

In their third game, Wood had a Lotus Cobra, a Llanowar Elves, a Vengevine and Garruk Wildspeaker out when Pedrakowski dropped an Inferno Titan on the table, killing the snake, the elf, and severely impeding Garruk's plans. Wood wasn't intimidated by the 6/6 monster and calmly cast Eldrazi Monument, raising his Vengevine to Status: Awesome. He attacked Pedrakowski down to 1, then made a Beast with Garruk. 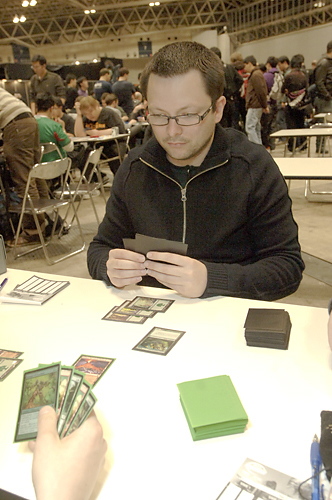 Pedrakowski attacked back with the Inferno Titan, and got rid of the pesky Eldrazi Monument with Nature's Claim. A turn later, he added Primeval Titan, and had sewn up the match for Poland.

Andrys won the roll and chose to go first. But he was immediately overruled by his teammate Mikolaj Wyspianski, who told him to draw. Incidentally, Wyspianski went on to play first in his own match, so it probably wasn't based on some sort of all-consuming hatred for playing as opposed to drawing.

With Australia down a match, Jeremy Neeman and Piotr Andrys square off at the far end of a reduced table.

Neeman started by filtering through a Manamorphose before casting Pyromancer Ascension. The threat of burn was not enough to keep Andrys from flooding the table with Elves: Nettle Sentinel, Elvish Archdruid, Arbor Elf, two Llanowar Elves, and Ezuri, Renegade Leader presented a formidable force indeed, and an alpha strike soon finished the job in the Poles' favor.

In the second game, Andrys got out a Burrenton Forge-Tender, but not much else. Neeman was all over him with Mana Leaks and Cryptic Commands keeping Andrys's spells ineffectual, and Ponder keeping Neeman's draws tight and snappy. Even when Neeman allowed a Nettle Sentinel to resolve, he quickly Lightning Bolted it.

Even though he was restricted to his early Burrenton Forge-Tender, Andrys got Neeman down to 6 life. Eventually, however, Neeman was able to begin assembling the tools he needed for his great work, and cast a Pestermite. He considered casting a Splinter Twin, but decided it would be easier just to bounce the Burrenton Forge-Tender with Cryptic Command and throw a bunch of burn spells at Andrys's face.

By this point, the match had already been decided in Poland's favor. However, it may be interesting to note that in their third game, Neeman had eleven lands before Andrys drew his second one. 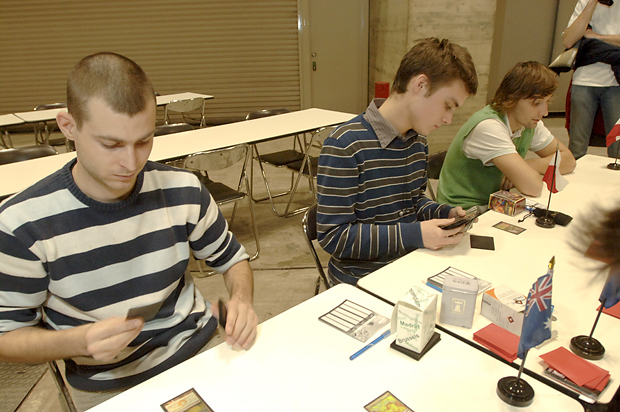