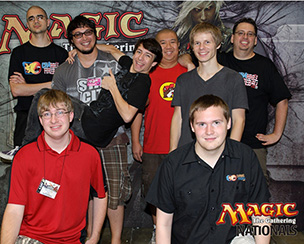 After seven rounds of play for Day 1, 224 players arrived to get another crack at the M12 Draft format. Wesley Wise, Hai Bing Hu, and Joshua Howe stand atop the standings as the only players to make it through undefeated. But they can't rest easy, as there are some big names chasing them down. Adam Yurchick, Todd Anderson, and last year's National team alternate David Ochoa are sitting right behind them with one loss. Play is underway, and in a mere seven rounds, we will have decided our Top 8! Check back throughout the day to see who manages to crack into the single elimination rounds!

Texan Magic veteran Haibing Hu went 7-0 on day one here at Nats and closed out the last three rounds in convincing fashion with a Goblin deck in the Magic 2012 draft format. As he sat down at a table with the other two 7-0 players -- Joshua Howe and Wesley Wise -- as well as a couple of former National teammates -- Adam Yurchick and Todd Anderson -- I was curious what his plan would be for this draft. Would he force the archetype that served him so well yesterday?

"I don't like forcing. I try to take what I am passed," said Haibing after the draft. He opened a pack and did not see anything he liked better than a card that has been around even longer than he has -- Sengir Vampire. He took an Incinerate with his second pick and then was faced with a dilemma for pick three.

Having passed an Æther Adept to take the Vampire, Hu wanted to avoid blue if at all possible but when he was passed a third pick Sphinx of Uthuun he could not pass it.

"I had to jump into blue for the Sphinx of Uthuun and I am pretty sure I had already put players to my left into blue," explained Hu who was willing to be cut off in one direction on the color. "I would rather take a signal from the player passing me two packs. Plus Sphinx of Uthuun is really good."

Hu added a Gravedigger, Bloodrage Vampire, and Manalith to his growing pile of cards and when his opening pack made its way back to him he found Drifting Shade waiting.

"I was pretty sure I was getting cut from blue," said Hu of the way pack two played out when he opened on Æther Adept and then was passed Gideon Jura.

He agonized between the Gideon Jura and either Mind Rot or Divination before ultimately dipping his toe into white to test the waters.

"I was pretty sure I was still going to be blue but if I got passed Pacifism and Griffins..." Hu explained of his Planeswalker pick. "Besides I can never beat this card. All the blue and black cards in the pack were pretty much the same and I was pretty sure one of them would come back.

He was right, as both the Mind Rot in his opening pack, and the one he took Gideon Jura over came back to him. He also picked up a late Divination as well.

Pack three started off with Doom Blade and then he took the first of three Vampire Outcasts. "Black was definitely open by the third pack," said Hu, who rounded out the draft with Merfolk Looter and a couple of fliers.