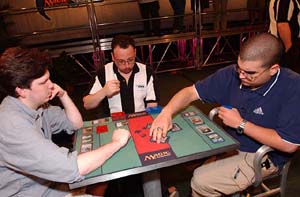 For Borteh, this is a chance for redemption. He made Top 8 at Nationals last year, but came short of earning a spot on the team. Regardless, he showed up to Worlds anyway, and lost an unwinnable Merfolk vs. Machinehead matchup to Tom van de Logt in the finals. This is his second chance to make the National team, and many are speculating that Borteh would give the United States team the talent and experience needed to take on the likes of the Dutch or the Germans. On the other hand, Andrew Ranks should not be written off so quickly.

Ranks tried to summon a turn two Nightscape Familiar, but Borteh had Force Spike. He then untapped, and cast Psychatog. Ranks tapped out for a Repulse on end step, but Borteh had yet another Force Spike. The 'Tog continued to attack for one, and Ranks cast Fact or Fiction on end step. Borteh responded with his own. The piles presented were Upheaval/Upheaval and Psychatog/Salt Marsh/island. Borteh took the two reset buttons. Ranks' Fact or Fiction now resolved, and Borteh offered up Circular Logic/Nightscape Familiar and Recoil/Repulse/island. Ranks took the two card pile. He then untapped, summoned Nightscape Familiar, and played a main phase Fact or Fiction. Borteh quickly gave Ranks the choice of four lands or Upheaval, and Ranks chose Upheaval. This left him tapped out, so Psychatog got past the Familiar for a point of damage. A second 'Tog then joined Borteh's side. 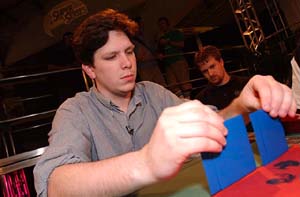 If there was ever a time to reset the board, it was now. Ranks tapped out for Upheaval, but Borteh had Circular Logic. Repulse bounced back Nightscape Familiar, and Borteh didn't have quite enough cards in hand and graveyard to kill Ranks just yet. He attacked for two and ended his turn. Nightscape Familiar came back out, and was followed by Probe with kicker. Ranks discarded swamp and Circular Logic, and Borteh discarded two Upheavals. The Psychatogs attacked for another two points of damage, and Borteh had only one card in his hand. A second Probe with kicker saw Ranks discard Deep Analysis and Cephalid Coliseum, while Borteh lost a swamp, leaving him with zero cards in hand. His only hope now was to get an unblocked Psychatog to finish off the game. With no cards in hand, the two grinning Atogs were all he had. Ranks did not block either 'Tog, and Borteh attempted Fact or Fiction to pump them up before damage. Ranks used Counterspell to stop that plan. He untapped, flashed back Deep Analysis and played Upheaval, floating mana to bring back out Nightscape Familiar and play a land.

Ranks now untapped, and Recoiled Borteh's only land to gain even more tempo advantage. Borteh summoned his own Nightscape Familiar, but it was countered with Memory Lapse. When it came back down the following turn, it headed straight to the graveyard thanks to Counterspell. Ranks cast Fact or Fiction on end step, and won the counterwar. The piles presented were Memory Lapse, Force Spike, Underground River and Nightscape Familiar, Psychatog. Ranks took the 'Tog pile, and played the now lethal creature. Borteh matched with his own Psychatog, but Ranks had Counterspell. Ranks' Familiar got through for a point of damage because Borteh's Familiar had to block the 'Tog. Ranks then overwhelmed Borteh, summoning a second Familiar, and a second Psychatog. Borteh looked to bring out his own Psychatog, and the resulting counter war was won by Borteh after cracking open a Coliseum to find Circular Logic.

The board now had Ranks's two Familiars and two Psychatogs against Borteh's one Psychatog and one Familiar. Ranks attacked with his whole team, and played Fact or Fiction before blockers. This brought up Repulse, and Borteh conceded.

Borteh mulliganed his first hand, and missed his second land drop. Ranks brought out Nightscape Familiar, and followed up with an unkicked Probe. Borteh had yet to draw a second land. "Why make me discard additional spells when I can do the work for you?" Ranks cast Duress, and Borteh conceded. 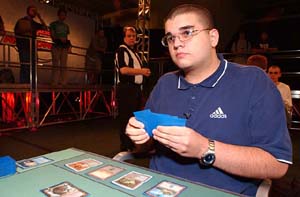 No spells were cast until Ranks had eight lands out, and played Duress. This resulted in a counter war that Ranks won. Borteh had Repulse, Circular Logic, Disrupt and a land left in his hand, and lost the Logic. With the coast clear with the exception of the card Borteh just drew, Ranks cast Probe with kicker. Borteh added Disrupt to the stack, which was paid for. Probe then resolved, and Ranks discarded swamp and Upheaval, while Borteh discarded two lands. Borteh was now up against the ropes, and Ranks got further ahead by winning a counter war over Fact or Fiction. Borteh split Counterspell/Familiar and Psychatog with two lands, and Ranks took the two-card pile.

Borteh summoned a Nightscape Familiar, which was Repulsed. Borteh responded with his own Repulse. Ranks untapped and went for it all with Upheaval, floating three mana. Borteh responded by blowing up a Coliseum. Upheaval resolved, and Borteh asked, "You have the man, the myth, the legend?" It wasn't quite a Psychatog, but Ranks did have Possessed Aven. Borteh tried to come back with Nightscape Familiar, but Ranks was waiting with Counterspell. As the Aven continued to swing for four, he brought out his own Nightscape Familiar. Borteh was now desperate, and flashed back Deep Analysis, going to nine. Borteh cast Lobotomy on himself, and conceded.