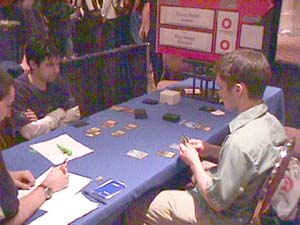 Ray Weiss and David Rood came to the Top 8 full of hope. Now only one of them can make the team. Rood is the young hotshot from Quebec; Weiss, an up-and-comer from Manitoba. Weiss is with Squirrel-Opposition, and Rood is running the same red-green deck as the rest of the Quebec contingent.

Weiss looked at his first seven cards. He was far from pleased.

"I can't BELIEVE this! Every match!" - Ray Weiss

He packed up the one-island draw, and found six with island and forest. Rood kept his opening hand. Rood's Rootwalla was matched by a Mongrel. He made one of his own. Weiss hired up Looter and Bird, complicating things. Rood doubled his Mongrel population. Weiss cut it down with Flametongue Kavu.

Rood knocked his deck, then dropped his own Flametongue. Weiss frowned and went into the think tank. He dropped Looter and passed it over. Rood's Firebolt took down the Looter, and another forced a Mongrel pitch. It dove in front of a Mongrel. Weiss was feeling the hurt. His only defense was Squirrel Nest. Two turns of smashing gave Rood the first game.

Shockingly, Rood chose to keep the Ensnaring Bridges in the board, despite the surety of Weiss's bringing in Shivan Wurm. Later he would explain that he felt he needed to go beatdown, and the Bridge would only give Weiss time to set up.

Game 2 was a flash. Firebolt and Engulfing Flames kept Weiss off Llanowar Elves and Merfolk Looter, but Rood's two land weren't exactly paying the bills. He had Mongrel to Weiss's Squirrel Nest and Llanowar Elf. Then Weiss upgraded to Shivan Wurm. Rood's life total took the elevator to six while he found a second Mongrel. An army of squirrel's and a 7/7 are hard to stop. Rood pitched to kill the Wurm, but couldn't handle the rest, and scooped.

Weiss opened the third game with Llanowar Elf and saw it get Firebolted. He replaced it while Rood busted out Call of the Herd. Weiss came back with Nest. Flametongue Kavu took out the Elf. Weiss Flametongued back. It was pure smash-and-grab.

The Call token traded with the Flametongue, and Rood kept the tap on with Meteor Strom and Wild Mongrel. Weiss calmed that noise with Opposition. Violent Eruption cleared the squirrels to free up Rood's mana, but Weiss was busing turning his lone remaining squirrel into a Shivan Wurm.

Rood tried to think a way out of the situation. He decided to work on generating monsters, hoping to amass an army and make a big move. Seven a turn didn't give him much breathing space. Weiss drew Call of the Herd, giving him enough creatures to put the game in his pocket. 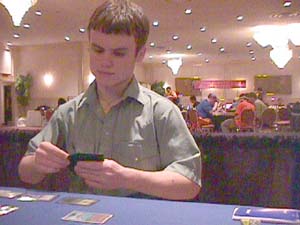 Rood started Game 4 with Grim Lavamancer and Basking Rootwalla, walking right into Weiss's Fire/Ice. He played Call of the Herd and was matched by Wild Mongrel. Rood flashed it back to keep the pressure up. Weiss tried to put a stop to that with Opposition. Rood busted out Hull Breach and Meteor Storm.

Now Weiss was in trouble. He had Opposition and Squirrel Nest in hand, but not a lot of time to put the pieces together. He chose Squirrel Nest, and hoped his Mongrel would succeed in taking out a Call token on Rood's next attack. Rood chose to activate his Meteor Storm and smash it.

Weiss brought out Birds and Opposition. Rood hit for three more and Stormed to the dome for the rest of his hand. Weiss tightened the lock, but had no way around the Storm. Two turns later he packed it in.

"Everyone's cheering for you." - Ray Weiss
"Yeah, where are your supporters? Don't you have any friends?" - David Rood 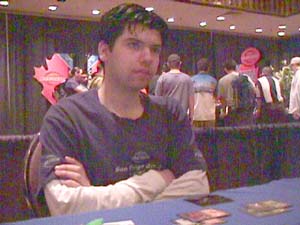 Rood's draw was sluggish for the deciding game. Weiss got two Birds and a Mongrel on the board while he just sat there. Without a fourth land, Weiss chose to make Llanowar Elf over Opposition. Rood's only play was Call of the Herd.

Here there was a huge rules dispute. Rood asked Weiss a question, and Weiss, thinking he asked "What color [of mana are you getting from your Birds]?" said "Blue." Rood was actually asking "Mongrel, what color?", but was misheard. Head Judge Mike Guptil was called in to sort things out. The issue was that if Weiss was resolving the Mongrel's colour-switching ability, he wouldn't be able to play the madness on Circular Logic. Guptil said that since Weiss was answering a different question than Rood was asking, Rood couldn't accept it as the answer to his question. When Guptil asked Weiss what color he was making the Mongrel, Weiss replied that he hadn't resolved the ability yet.

The upshot was that the Eruption was countered, and things looked very bad for Rood. He got a Lavamancer on board, but was overtrumped by Shivan Wurm. A Flametongue killed the Mongrel, but Rood simply couldn't handle 7/7 worth of beef. He scooped in three turns.