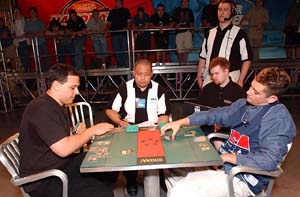 So far, the predictions have panned out, with the exception of Justin Gary beating Jon Finkel in the Quarterfinals. The notion was that Finkel would beat Gary, lose to Wagener, then lose to Berkowitz in this playoff match. Because it didn't quite work out that way, Berkowitz will have a harder matchup here.

Gary mulliganed down to five, and opened with Duress. It took Violent Eruption, leaving Berkowitz with two Rootwallas, Llanowar Elves and lands. Basking Rootwalla came out first, and died to Innocent Blood. The other two 1/1 green creatures came out next, and Gary only had a swamp and Cabal Coffers as lands.

He drew another swamp, but still had no plays, while Berkowitz summoned Phantom Centaur. Gary did very little but Duress out Violent Eruption, and scooped soon after, using a face-up Mutilate to collect his cards.

Gary cracked open a Red Bull, noting that he hadn't lost a match drinking it.

This time, Berkowitz mulliganed, going down to six. He had a first turn Lavamancer, then a Rootwalla and a Firebolt to the head. The Rootwalla attacked for three damage and Berkowitz ended his turn, sitting back on a Lavamancer activation. Gary played Engineered Plague on Lizards, and Berkowitz activated the Lavamancer on end step. He would have been forced to remove Firebolt from the game, but when the Rootwalla went to the graveyard, this wasn't necessary. Berkowitz played Llanowar Elves and Gary cast Mutilate, then Wild Mongrel died to Corrupt. 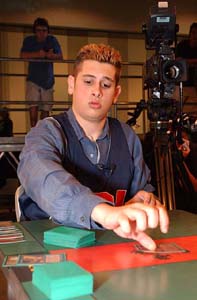 Blistering Firecat came out face up and went right into the Red Zone, bringing Gary to seven life, but leaving Berkowitz with no cards in hand. Now Gary got to work, playing Diabolic Tutor. Berkowitz drew Llanowar Elves off the top of his library, and put it right into play. Innocent Blood killed it, and Gary played Riptide Replicator, set to make green, 3/3 1996 Magic World Champions. A flashed back Firebolt put Gary at five, and Berkowitz played Compost. Visara added a huge threat to Gary's side, and Berkowitz drew, tapped six mana, and lunged a Llanowar Elf at his head just to psyche him out a little.

Gary- "I knew you had no outs there."
Berkowitz- "Admit it, your heart pounded for a second."

Berkowitz had a turn two Mongrel, which died to Smother. He played another one, and Gary cast Duress, taking Violent Eruption and seeing Phantom Centaur along with lands in Berkowitz's hand. Firebolt went to Gary, bringing him to fourteen, and Smother killed the Mongrel. Firebolt was flashed back and followed by Llanowar Elves, as Berkowitz was hesitant to play the Centaur in his hand. Diabolic Tutor was followed by Corrupt, which killed the Elf. Berkowitz drew Elephant Guide, but wasn't too eager to throw his lone creature out there. Gary played the Replicator, setting it to make 4/4 green Avatars. Berkowitz now drew another Centaur, and played one.

Duress took care of Elephant Guide, and Gary used removal to shrug off the Centaurs. A Diabolic Tutor and two 4/4 Avatar tokens later, and Berkowitz conceded.

Gary- "I'd like to give a shout out to Darwin Kastle for the Replicator tech. I hated it when I first saw it."

Berkowitz- "A shout out to Darwin Kastle...there's something you don't hear too often."

Berkowitz got out his toothpick, and the banter shifted to Red Bull vs. the stick of wood. Gary got in a little jab, noting that it wasn't really Berkowitz's gimmick.

(Big laugh out of the crowd and Gary)

Of course, Compost went to the graveyard, and Berkowitz started to send burn at Gary. A pair of Hammers brought him to fourteen,

Berkowitz- "Is your hand good? If it is, I may just scoop. Compost was my whole game." 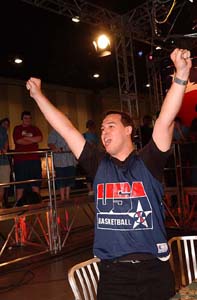 As it turns out, Gary's hand was not that great, as he played Nantuko Shade, missed his third land drop, and said go. Berkowitz missed his fourth land drop, and played a face down Firecat. Smother took care of it, and Berkowitz summoned Phantom Centaur. Duress nailed one of two Violent Eruptions, and Gary finally played a third land. The Shade ran right into the Centaur, and Innocent Blood followed.

Berkowitz topdecked another Centaur, getting a huge roar from the crowd, but Gary had the right answer in Edict, getting another big reaction. Basking Rootwalla died to Smother, and Gary played a fourth land. Call of the Herd gave Berkowitz an elephant, and Gary played Cabal Coffers.

Visara reared her ugly head, and Berkowitz played Elephant Guide on his elephant token, swinging for six. Gary didn't block, and went to eight. Gary untapped and cast Haunting Echoes, which not only removed a ton of threats from Berkowitz's deck, but also got the Call out of his graveyard. Berkowitz had been wearing a USA Basketball jersey over his shirt during the match and took it off, giving it to Gary. The elephant attacked once again and Visara killed it, putting a replacement elephant into play thanks to the Guide. Berkowitz put Elephant Guide on this one as well, and Firebolted Gary. It didn't accomplish much, as a pair of Corrupts with a Visara attack put Gary on the US National team. After some cheers and encouragement from the crowd, Gary put on the USA Basketball jersey, and was definitely very happy to be back on the team after six years.