As the players shuffled for this match that would determine the final roster spot on the Canadian National team—Josh Rider and Nathon Braymore occupy the first two spots—they groused about the luck of their previous rounds opponents.

Guillaume was philosophical about it, "I was lucky all weekend." 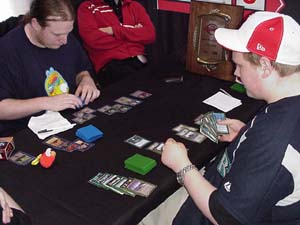 Rich took a moment to reflect and nodded, "I don't think anyone can beat me in the luck department this weekend—the whole drop and undrop fiasco!"

Rich got his best possible draw in this match up—a turn two Compulsion. "It looks like I am losing," commented Guillaume. All Rich did this game was cycle cards through his Compulsion and cast card drawers. Guillaume tried to keep up with an Undead Gladiator but Rich was ripping through two and three cards every turn.

Whenever Guillaume tried a spell—whether it was Duress or Skeletal Scrying—Rich was able to Logic it though his Compulsion. Eventually he cast Cunning Wish for Mana Short during his opponent's upkeep. When he cast the Mana Short—also during his upkeep—Guillaume was able to dig for three or four cards in response.

"What do I need to show you to make you concede?

When Guillaume's draw step yielded nothing he did concede and Rich came to a realization, "I guess if you drew Duress you might have won that game. I didn't think of that."

Guillaume laughed about his loss to Braymore as he sided Persecute in for the second game, "Should I put this in? I know it is pretty useless."

The story had spread throughout the entire hall and Rich figured it out. "Oh I know what that is..."

Guillaume shrugged and showed him the Persecute as he put it in his decks. There are no real surprises here as both players have had access to the decklists since the end of play yesterday.

When Guillaume passed the turn back to Rich for his second turn he was wincing in anticipation of another turn two Compulsion. "Don't worry, I only have this Duress," Rich teased. Duress revealed a hand of Innocent Blood, Undead Gladiator, Corrupt and a handful of lands—the Corrupt hit the bin.

One of Guillaume's sideboard cards—a Disrupting Scepter—had become damaged over the course of the weekend and was replaced with a proxy written on a Forest. The Quebecer laughed as he tapped out to play it, "I play a Forest." He reached for his sideboard box to get the damaged copy but Rich didn't care, "Whatever it is, I'm Force Spiking it."

Guillaume attempted to tutor but it was countered with Logic. Rich started to dig with Concentrate while Guillaume tried to keep up with Undead Gladiator. Rich Concentrated into another Duress and saw the zombie and a Swamp. Guillaume also cycled into Duress and saw a handful of lands—5 to be exact—and Deep Analysis and Counterspell. He took the counter.

Rich cast Deep Analysis and flashed it back but he seemed to have nothing. Guillaume's Duress was Counterspelled but his Disrupting Scepter landed securely. Tapped out, Guillaume was nervous, "Is this the 'You are dead' turn yet?" 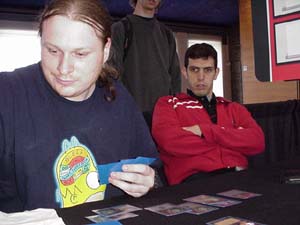 Slowly but surely, Guillaume began to whittle away Rich's hand while performing stupid Gladiator tricks during his upkeep. When Guillaume played Mirari, Rich knew it was time to make his move. "Cast Upheaval floating a blue and a black." As they picked everything up, Head Judge Marc Hernandez went adjust the game totals in the feature match area. Rich stopped him, "No, no. Not yet." He played and Island and cast Engineered Plague naming zombies. This got almost as big a laugh as the six land Persecute.

Two turns later Rich was groaning as he played out a Tog, "Of course I drew it the next turn." He groaned a little more when Guillaume had the Smother EOT. The Scepter came back down but it had a lot of work to do. Rich's Duress revealed a hand of Scepter, Haunting Echoes, Cabal Coffers, Mirari, and Skeletal Scrying—he took the Mirari and played his Compulsion.

The Scepter was facing an uphill battle as Rich drew another Concentrate and played a Zombie Infestation. To speed things up, Guillaume attempted the second stick but it was countered. Persecute was also countered on the next turn but Rich's Persecute resolved and emptied the Quebecer's hand of Haunting Echoes, Diabolic Tutor and Skeletal Scrying.

Guillaume kept at him with the stick but Deep Analysis kept Rich's hand plump. "I just need my other Upheaval to not be my last card." When he flashed back Deep Analysis he found a Tog and realized that should do the trick as well.

Guillaume ripped a Chainer's Edict but it was countered with a Logic. He examined Rich's towering graveyard, "You have enough to kill me three times."

Guillaume was faced with another hand of six lands and a spell—this time it was a Smother. He kept it and drew into a third turn Nantuko Shade that was countered. Rich had no early plays and Guillaume seemed startled when his Diabolic Tutor resolved for a Mind Sludge. He ripped a Cabal Therapy to force it through. He took away Rich's only Counterspell and Mind Sludge took care of everything else. 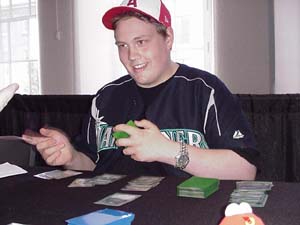 One of the cards Rich lost was Deep Analysis and he began to recoup his lost cards. When Guillaume attempted another Tutor on the next turn it was countered. A fresh Deep Analysis found Rich four more cards and a Duress, which revealed a hand of Innocent Blood and Smother—he took the Smother.

Pretty soon Rich had more cards than he knew what to do with. After playing a Concentrate he cast Zombie Infestation. On his next turn he looked at Guillaume and said, "Noir..." Guillaume was puzzled so Rich repeated it, "Noir... I am naming black." He showed him the persecute he was referring to and took away the Quebecer's Duress and Innocent Blood. Guillaume drew a Skeletal Scrying and attempted to draw seven cards but Rich countered it with Logic after discarding it to make a zombie token.