Paul Cheon is a name many U.S. Nationals fans will be familiar with. The champion in 2006, he managed to repeat his Top 8 performance this weekend, though he hasn't fared as well as he did that year. Instead of the finals he found himself in the 3rd place matchup hoping for the last slot on the Worlds team for the chance to defend America for the second time in three years. Marsh Usary may not be as recognizable, but did recently take a job with Magic superstore Starcitygames. Originally hailing from Tennessee, Marsh now lives in Virginia, though he attended college in North Carolina.

"I feel a lot less pressure," Paul said as he and his opponent amicably chatted and shuffled. "If you can't be a champion..." he trailed off, dismissing the pressure of no longer chasing the title.

The two talked about where they were from and who they play with. Marsh pointed at his baseball cap with the title "Shark Insurance" on it and explained it was the name of his Magic Online clan. 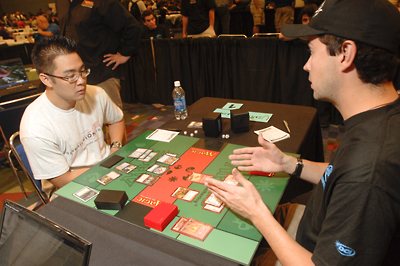 Paul Cheon and Marsh Usary vie for the honor of representing the United States at worlds.

Cheon won the die roll and kicked things off with a turn-one suspended Ancestral Vision, a strong play for his Faeries deck. Marsh had a Mogg Fanatic, a reminder that Mono-Red is traditionally a bad match-up for Faeries. Paul wasn't backing down, however, running a turn-two Bitterblossom onto the table while Marsh simply played a tapped Keldon Megaliths. A third-turn Flame Javelin from Marsh put the life totals at 20-11 in his favor, the Bitterblossom making up for the fact the Virginian didn't have much in the form of attackers.

A Figure of Destiny finally came down for Usary and he leveled it up into a 2/2 almost immediately. The Kithkin was hastily pressed into the red zone and Cheon agonized over whether he should block with his Mutavault. At 10 life and with Marsh having four sources of red mana, he was in danger of losing half his remaining life. Ultimately he opted not to block, then used a Cryptic Command to bounce his opponent's creature when Usary opted to make it a 4/4. Marsh simply re-played it and passed the turn.

The Bitterblossom was in high gear as four Faerie tokens sat on Paul Cheon's board. An attack with them put his opponent down to 14, and Marsh was suddenly forced to keep an eye on his own life total. The Faeries deck often has a way of sneaking up on a player. His Magus of the Moon met a Cryptic Command from Cheon and Usary needed to find a way to get the last few points of damage in so that his opponent's own Bitterblossom could finish the deed.

He tried to do exactly that with a 5/4 Demigod of Revenge that met no resistance from Cheon. He was able to block it with a Faerie token, but took a long time to come to the decision. A judge leaned in to whisper that Paul needed to play faster.

"What'd he tell you?" Marsh asked his opponent, not having heard from being out of earshot of the quiet judge.

Without missing a beat, Cheon responded "He told me what was in your hand," before reassuring his opponent by explaining what had actually happened. Usary looked a little taken aback, but then laughed and joked with bystanders about the situation.

With the turn back, Cheon untapped and did some counting. A plethora of Faerie tokens alongside a Shadowmage Infiltrator weren't enough to take his opponent out. When he counted a Faerie Conclave and Mutavault as well, however, he came up with a number he liked and sent all of his creatures sideways. Marsh did some quick math and conceded.

While shuffling for the second game, Cheon inadvertently flipped a card out of his deck, revealing a Razormane Masticore. Looking sheepish Paul quickly scooped it up and returned it to his deck saying "That's a pretty bad card to reveal there. Not that my opponent didn't know I was bringing it in."

Usary, focused on his own sideboarding, hadn't seemed to notice.

As they entered the sixth minute of their pre-game, a judge leaned in to warn the players about taking too much time, this time voicing his concern to Marsh instead of Paul as Cheon had already presented his deck and was waiting for his opponent to finish.

On the play for the second, Marsh kicked things off with a curve of Mogg Fanatic and Blood Knight. The Knight met its end from a Terror, and his attacking stopped altogether when Paul made a Bottle Gnomes. Usary missed his third, then fourth land drops. 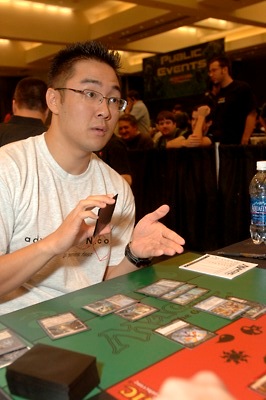 After you.Sitting pretty, Paul followed up his Gnomes with a Bitterblossom, leaving up enough mana to play Spellstutter Sprite or Rune Snag. Usary hit his third land, but passed without playing a creature, spending Cheon's end of turn on a Sulfur Elemental. Of course, it's the Faeries deck that's better known for playing flash creatures, and Paul did exactly that on his opponent's upkeep, playing a Mistbind Clique. The 4/4 hit play championing Bitterblossom (which had cranked out a single token), and Usary floated three red mana into his draw step.

The Gone portion of Dead // Gone was the sink for the floating red, returning the 4/4 and forcing Cheon to take another damage from his Bitterblossom. The race was looking good for him, however, as he simply replayed the Clique the following turn and attacked to put his opponent down to 15, tying the scores. When Usary tried to attack with a pair of Sulfur Elementals, Cheon was ready with a second 4/4 Clique, eating the 3/2s with the Faerie and a Mutavault. Marsh made a Sulfurous Blast with four floating mana to kill his opponent's Clique, but still faced pressure from the first.

Hoping to be out of the range of more shenanigans on his turn, Marsh tried to move into his draw step. Cheon stopped him and revealed a third copy of Mistbind Clique, forcing Marsh to float mana for the fourth time in as many turns. He used it to play a Sulfurous Blast, putting the scores at 10-3 in Cheon's favor after Paul attacked with his Mistbind Clique. Usary took a look at the top card in his library but, not finding any help, scooped for Game 3.

"I need to play Painter's Servant," said Usary while shuffling for the third game. "I could set it to white, then my Sulfur Elementals would wreck your board." The two players laughed at the idea before Marsh added, "I'd need something for your Shadowmage Infiltrator though."

"That's why I played it," Cheon said excitedly. "No one can Terror it."

Both players had one-drops for the third game, Usary in the form of Figure of Destiny and Cheon in the form of Ancestral Vision. When Marsh tried to turn-three a Magus of the Moon, however, Paul floated

in response and used a Terror to bin the 2/2. Figure, already having grown a size, bashed Paul to 16. Most of that damage was quickly undone with a chump-blocking Bottle Gnomes.

Paul tried to make up more ground with a second Bottle Gnomes and a Razormane Masticore, but Usary's Figure, now a 4/4, was joined by a Demigod of Revenge. After a few burn spells, he managed to stand things at 20-7 in his favor. Cheon was in the worst shape he'd been so far in this match.

He found an answer for the Demigod in the form of Murderous Redcap after the 5/4 had taken 3 damage from Masticore during Paul's upkeep. Usary didn't seem concerned; with Paul nearly tapped out and devoid of fliers, a sixth land or a second Demigod would be enough for Usary. When the Tennessee native flipped a second copy of the 5/4, returning his original to play, Paul calmly nodded and scooped up his cards.

On the play for the second time in the match, Cheon had a monstrous start playing a Secluded Glen on his first turn revealing Bitterblossom, then used a blue mana to suspend an Ancestral Vision. Usary had a Mogg Fanatic, but somehow the 1/1 paled in comparison.

Marsh continued to curve out with a Blood Knight, then a Magus of the Moon. Clearly expecting the problematic 2/2 to be countered by Cheon, he seemed excited when it hit play. That elation was short lived as Paul revealed a Slaughter Pact to kill it while placing a counter on top of his library to remind him to pay for the upkeep. A Flame Javelin dropped Paul to 10, but when Cheon made a Razormane Masticore it looked like Usary was the player in trouble.

Marsh was going to make a game of it, however, attacking all out and using a Sulfurous Blast to wipe out both his and his opponent's board. That left Paul with a Bitterblossom slowly ticking down on his life and left the scores at 17-7 in Usary's favor. With Cheon tapped low, Marsh went all-in, play first one, then another Incinerate to drop his opponent to 1. Cheon, clearly not holding any countermagic, could do nothing but shake his head, look over at his Bitterblossom, and watch the game slip firmly out of his grasp. 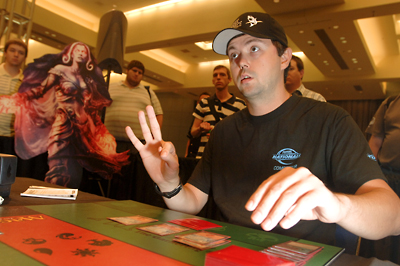 A-OK."Good luck, sir," said Marsh Usary to his opponent as they settled in for the final game of the match.

"You too," Paul replied, before keeping his opening hand and starting on yet another first turn Ancestral Vision.

Marsh didn't have a one-drop, but because his opponent's first land was an Underground River, he got a free Shock in as Paul took a damage to suspend his Visions, then took another to play a Bitterblossom. Cheon didn't seem afraid to use his life as a resource for gaining mana, pumping out a Shadowmage Infiltrator alongside his growing Faerie horde and his Ancestral Vision waiting to finish winding down. A Magus of the Moon from Usary was actually a boon to Cheon, allowing him to play Murderous Redcap in order to kill the 2/2, taking 0 damage in doing so.

Stuck on three lands, Usary was dismayed to find Cheon's Ancestral Vision had netted him a 4/4 Mistbind Clique, which he then played on Marsh's upkeep. As usual, Marsh floated three mana then used it to Incinerate his opponent and Dead one of the Faerie tokens before handing the turn back. Paul happily attacked for 7, putting Usary at 8. When Paul revealed a second Mistbind Clique on Usary's next upkeep, Usary drew his card for the turn and extended his hand graciously.