third-place playoff would determine who goes to Paris as part of the US National Team, and who takes 4th as the alternate. It was a Solar Flare mirror match, pitting two black-white-blue, dragon-packed reanimator decks, piloted by Luis Scott-Vargas and Ben Zoz, against one another. Zoz knew that Scott-Vargas would love to make the team to join his friend Paul Cheon, but Zoz had a few dragons of his own to put in the way of that dream. 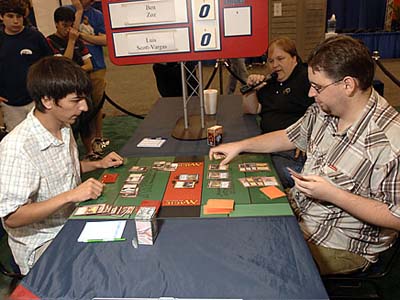 Ben Zoz and Luis Scott-Vargas battle for a spot on the U.S. National Team.

Scott-Vargas got to town with an opening "Compulsive Research discarding land" - a phrase you'll see a lot in this report. He later cracked the first business spell with Persecute. Zoz had the Remand, but Scott-Vargas's Remand asked politely for that Remand to stick around until later, and Persecute resolved. Scott-Vargas named black and hit Kokusho, Persecute, and Angel of Despair, leaving two Wraths and the stuck Remand.

Both players piled lands for a while, including Mikokoro, Center of the Sea for Zoz. As Scott-Vargas set up with a Court Hussar, Zoz activated Mikokoro almost "for free," keeping his opponent's hand full and causing him to discard the extra cards. The two fought over a Court Hussar here and a Persecute hit Zoz's Wraths, but Zoz was not out. He kept up card parity with that hard-working Mikokoro, and finally got through a Zombify on its second casting. A zombified Angel of Despair loomed over the board for just a moment, until Scott-Vargas animated his own Angel, Vindicating Zoz's.

Zoz Researched discarding land, then hardcast Yosei, the Morning Star. Scott-Vargas struck back with his own copy of the legend, and both players spent a turn flattened under Yosei triggers.

Zoz got to untap first and saw the green light. He sent in a Court Hussar, which got through and became Ink-Eyes, Servant of Oni, which in turn reanimated Scott-Vargas's Yosei. Zoz then dropped Mortify on the Yosei to keep Scott-Vargas's world tilted at ninety degrees. One more crash-and-reanimate later, Zoz dropped Angel of Despair on the zombie Yosei, and Scott-Vargas reached for his board. The big ninja and white dragon-based disruption allowed Zoz to recover from Persecute pain and hit back hard. 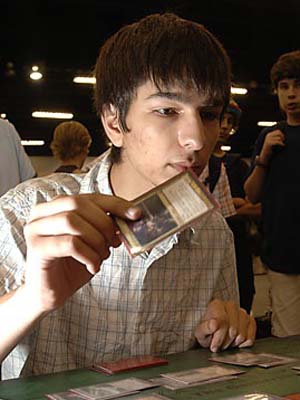 Ben Zoz hits back hard with Angel of Despair.

After a flurry of land drops and signets, Scott-Vargas opened with Castigate. Seeing three Court Hussar, Remand, and Cranial Extraction, he unsurprisingly took the Cranial. Zoz started the Hussar Train to dig for action, and Scott-Vargas matched with two of his own. Zoz had Remand for Scott-Vargas's Meloku, and untapped to Persecute-blue the legend away, seeing a white dragon and land.

Scott-Vargas summoned Yosei while Zoz looked for an answer with his third Hussar. Scott-Vargas fired a blind Cranial Extraction naming Condemn, and skewered Zoz's only two spells, leaving just a slightly smoking, four-land hand behind. Yosei got in there for 5, bringing Zoz to 13.

Zoz answered with a Vindicate Angel off the top, killing Yosei, but Scott-Vargas had a replacement white dragon as Zoz's permanents napped for a turn. Kokusho joined its white cousin, and although Zoz had Miren to gain life from his Angel, he had no good plays against the two dragons.

A nearly prophetic Extraction on Condemn paved the way for another draconic killing blow.

Stripped of action, Zoz could only look on as Scott-Vargas Zombified his Angel, Stone Raining an Azorius Chancery on its way in. Zoz Researched, discarding Wrath and Yosei and leaving a Caves of Koilos up. Fearing that untapped white source, Scott-Vargas Researched for something to stop Condemn, but marched Angel in there anyway, and Condemn indeed sent Angel to the bottom. Unable to reanimate, Scott-Vargas made a consolation Court Hussar.

Zoz took the opportunity to Cranial ExtractionAngel of Despair, seeing his opponent's Condemn, Zombify and Yosei. Sitting on almost twice Zoz's mana, Scott-Vargas deployed Yosei and Remanded Zoz's attempt at Zombify. Scott-Vargas's Hussar marched into the Red Zone as Yosei No. 2 set up the lockdown, and when Scott-Vargas reanimated one of the white dragons the same turn, Zoz packed it up.

Scott-Vargas had a bounce land-discarding-Meloku trick, and his Castigate met Remand. Castigate bounced off a Remand again, and Scott-Vargas Researched discarding land, his hand full but unable to pierce the Remand-wall.

Zoz lowered the boom with a Cranial Extraction naming Castigate, and was pleased to find three copies along with Extraction, Research, and Hussar. Scott-Vargas's return Extraction wiped out Angels of Despair. 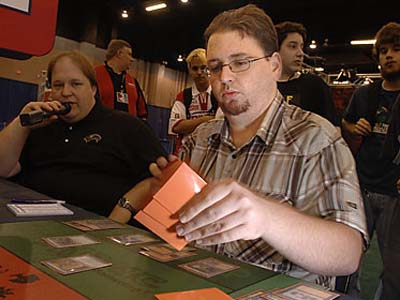 Zoz hardcast Ink-Eyes, followed it up with Persecute on a pair of Compulsive Researches. Scott-Vargas counted his life total and his outs, and even holding a Zombify and Kokusho, the math wasn't good. That uppercut to Scott-Vargas's hand disruption allowed Zoz to get down the hardest-working ninja in the game, then work over his opponent in short order. This fight would go to a fifth and final game.

Zoz had the first business spell in Court Hussar. Scott-Vargas took that crucial turn-four opportunity to throw a Persecute at his opponent, which resolved, and took black cards - a déjà vu-inducing double Persecute and Angel of Despair, leaving lands and Wrath. Scott-Vargas followed up with his own Hussar and then Yosei, forcing Zoz to Wrath and spend a turn all sideways.

Scott-Vargas pressed the attack with Compulsive Research discarding a Hussar and Signet, and reanimated the white dragon while Zoz dropped Mikokoro. Yosei got in there, and Cranial Extraction removed the possibility of Angel of Despair, seeing his opponent's hand of lands. Zoz activated Mikokoro to drill for action spells.

He found one - a hardcast Ink-Eyes. Scott-Vargas's next Castigate hit Yosei, and the in-play dragon crashed in, taking Zoz to 10 and showing either a Court Hussar chump or a Minamo-untap.

Zoz had a Persecute-blue to check the situation - and had he named black, he would have hit Ink-Eyes, Persecute and Angel of Despair, but instead whiffed. Ink-Eyes attacked and Yosei duly untapped and blocked, tapping him down. Zoz regenerated Ink-Eyes, but this tapped him out. Scott-Vargas played quickly now, seeing the opening - he dropped Angel of Despair on Ink-Eyes, killing the rat ninja, then stormed the gates with Angel and Hussar, ninjutsu'ing out his own Ink-Eyes for lethal damage.