Adam Chambers is a Pro Tour regular who can usually be found working with the likes of semi-retired Tim Aten to prepare for Pro Tours. At this year's World Championships he dug himself into a bit of a hole during the Standard portion, starting the event 0-4, but he's been hot since then, winning every single match he's played. That streak includes a 6-0 run during the Limited portion of the event and when the aforementioned Aten informed the coverage staff that Chambers's view on triple Lorwyn draft was truly innovative and that his performance was not simply a fluke, we couldn't help but take the chance to sit down and talk with him.

On the question of whether or not one should play eighteen lands in their draft decks or risk trimming one or two to squeeze in extra playables, Chambers came down firmly on the side of caution. "I find that I'd much rather play eighteen lands than some card that isn't meant to be in my deck or isn't going to be very good." He admitted that occasionally he'll trim a single land if he feels his curve is low, he's playing lots of cantrips, or he has lots of additional mana fixers, but his lists will usually feature the full eighteen mana sources. 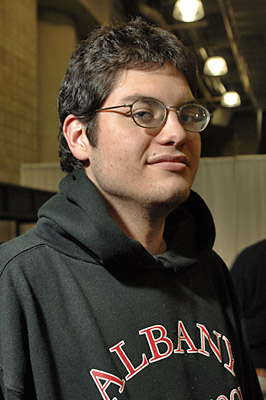 And on drawing or playing first?

"I always draw first, no matter what. I like to have more information as you need to know what to kill to win the matchup and you simply have more cards than your opponent."

Was he worried about being out-tempoed in a format generally credited as being fast for Limited?

"It's not like I disregard mana curve; it's just that I think cards are a lot more important than tempo."

Chambers clarified what he meant by knowing what creature you have to kill in a matchup by saying, "In this format I find that every time I draft, all I do is pick removal. Every deck is going to have whatever creature it's based around and you're going to have to either kill them or lose. Dreamspoiler Witches in Faeries or Lys Alana Huntmaster in Elves or Silvergill Douser in Merfolk... pretty much all Merfolk, actually. I always pick removal in the early picks."

"I don't know how to win with white, and I won't draft it no matter what." He also violates one of the most sacred conventional wisdoms of Lorwyn draft: he doesn't search out a tribe to pick up. "I don't really look to draft the tribes. If they come I'll draft them or if I open some card, like Thundercloud Shaman maybe, I'll draft them, but I find that removal is more important than tribes. If you take away the key creature, the rest of the tribal cards aren't too good. If you can kill the creature a deck is based around the rest isn't so good."

Chambers typically tries to start a draft by picking up Moonglove Extracts and Weed Strangles but did have one uncommon he always keeps an eye out for: Marsh Flitter. "If I see it I almost always pick it. It's very good and works great with a number of the black cards. If you want to play a defensive game with the card it's really hard [for your opponent] to do anything about it without getting at least a couple of your opponent's cards. It's one of the best plays for turn four."

Sometimes it pays to think outside the box and for Adam Chambers it meant a decent shot at the Top 8. Here are the draft decks that put him in that position, with the second being, in Adam's words, "Theoretically the deck I want to draft every time."