"Actually, This Is My First Rodeo"

At the end of Day 1, only two competitors remained undefeated—one of whom was Dominick Konieczny, a Polish player and first-time competitor at the Pro Tour.

"I'm feeling good," he said when approached after Round 11, still sitting pretty at 10-1. "Yeah, really good."

Konieczny played his green-white-blue Bant-style control deck with Gideon Jura and Jace, the Mind Sculptor, backed by green mana acceleration, to a perfect 5-0 record. He then made the best of a bad situation, piloting his unimpressive draft deck through a field of great players and even greater bombs.

"I beat a Gideon yesterday," he mentioned. "So lucky!"

"Also a Sphinx of Magosi, and an Angel," he added. But don't let his casual manner fool you—Konieczny is one of the newly minted crop of powerful players transitioning from Magic Online to the Pro Tour, among illustrious company like Brad "FFfreak" Nelson and Luis "lsv" Scott-Vargas. 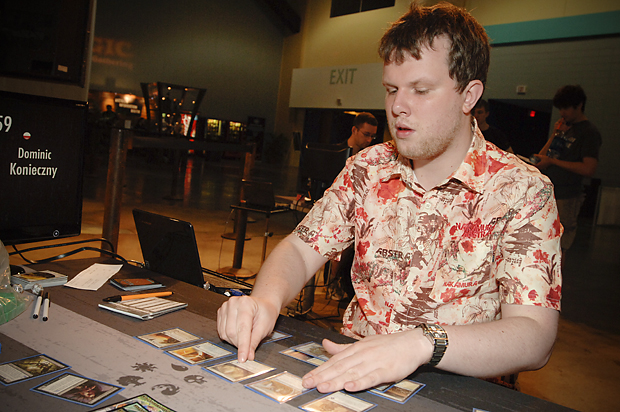 Konieczny qualified via a PTQ in Poland, but primarily uses Magic Online for both practice and pleasure. He began playing Magic roughly eight years ago—suspiciously coinciding with the release of Magic Online. Coincidence? You decide.

"It's great, you can play any time and any place," he said of the digital offering. "Not to mention there are a ton of great players online, so the practice is good as well." He further extolled the virtues of the program when asked about whether it was daunting playing against the world's best this weekend.

"Actually, not really. I already knew and had beaten a lot of them online, so I felt pretty good about it," he said.

Konieczny was quite happy about his chances—both of Top 8, and of course qualifying for Amsterdam this September. "I think I am definitely going to make the qualification cutoff for Amsterdam. Winning would be nice, too!"

So how can others follow Dominick's example and make sure their eventual arrival at the Pro Tour scene will also have the crushing success of a 10-0 start? Practice, practice, practice, he said. Especially on Magic Online, where you can play against the world's best.