After all the debate, after all the theorizing, only one person was able to claim the title of Grand Prix-Singapore champion. That person was none other that Pro Tour-Barcelona Top 8 finisher Albertus Law.

The lineup of opponents Law had to face on his way to the top was impressive. First he took out APAC Top 8 finisher Royce Chai in the quarterfinals before facing off against top seed finisher Leong Ding Yuan in the semifinals in what many envisioned to be a bad matchup. Luck was on Law's side however, and he easily dispatched Leong 2-0. Relief came only to Law upon the discovery that his friend and teammate, Kelvin Hoon had made the finals. 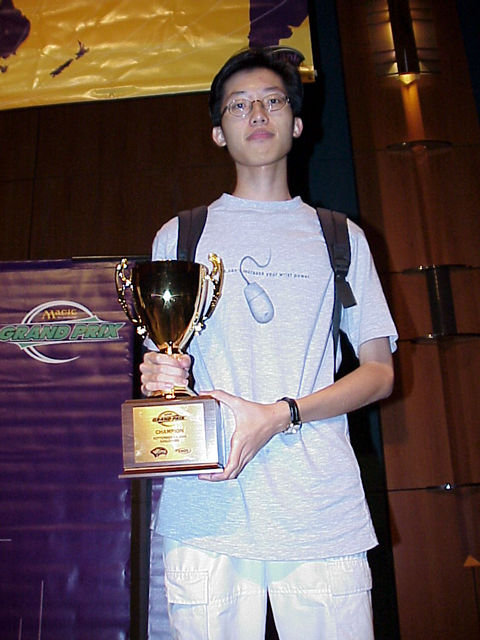 Going into the finals playing against your own teammate has surely got to be a great feeling, and it certainly was relief when Law and his W-U-R control deck faced off against his friend and teammate Kelvin Hoon and his W-U-R aggro deck. In the end, Law emerged victorious, taking down Hoon two games to one.

Much of his success can be attributed to his hard work playtesting with his team, combined with the occasional stroke of luck, which eventually enabled him to do well with the deck that he chose to play- even though it was a last minute decision. Scouting the Grand Prix Trials held the night before brought Law to the conclusion that David Price's 'Monkey, May I?' deck was the deck to beat, which was unfortunately the deck that his team had intended on taking. Not willing to play several rounds of mirror matchups, he then decided to switch over to his current deck choice, Counter-Trench under the advice of his teammate- the ever ready Nicholas Wong.

In fact, the testing trio of Nicholas Wong, Kelvin Hoon and Albertus Law is one of the strongest collection of players in Singapore. In fact, the three combined make up Team Slaughterhouse whenever they play in any Trio Team Limited Qualifiers. In fact, they played in two separate local qualifiers and their average finish? 1st place. Unfortunately, they are unable to attend this season's Pro Tour- New York, due to school commitments on Law's and Hoon's part.

However, skill does not come without its drawbacks. Ever since we in the Sideboard shone the spotlight upon Law at his Top 8 finish in Pro Tour Barcelona, he's felt the pressure of everybody's expectations as now he had the world's eye turned upon him. Winning this Grand Prix has done lots to reinforce people's beliefs in Law, and more importantly, provided a valuable boost to avoid the "lucky scrub" label.

After this most recent accomplishment, what next? Well, he does have his eyes set on Grand Prix- Hong Kong...