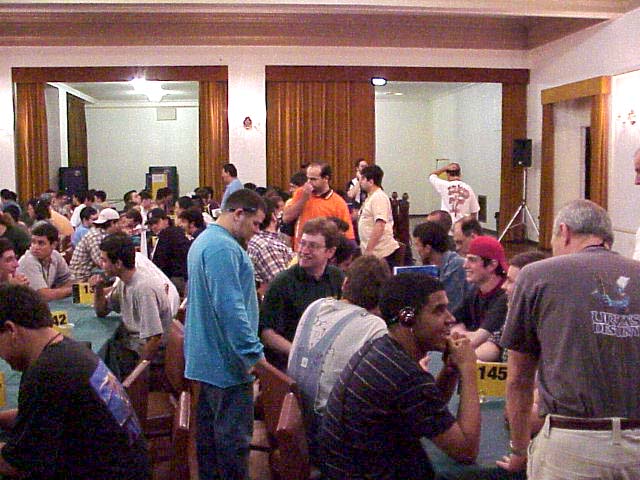 Alex Shvartsman is somewhere in this pictureAfter a long delay Alex Shvartsman finally got to open his card pool, which was registered by Mark Schneider. The first scare came when Alex couldn't find two lands (a Swamp and a Mountain). After a more focused searched the two elusive cards showed up.

Like most players, the American started by splitting the cards in several piles: separated by colors and each color split between creatures and non-creature spells. A quick look at those piles made Alex shake his head: he was in for a long day.

Although the card pool looked interesting, Shvartsman knew his three byes would force him to play versus good decks and good players. He needed to find a deck that could carry him to, at least, a 5-2 finish.

He reviewed all the colors and dumped Green right away. He then picked up the U/W golden cards, adding some white cards and his Ertai, The Corrupted to that pile. He was still not happy with what he had. He briefly considered the U/W/b cards and after checking the lands and red cards quickly put it aside, later adding cards to that pile to create a possible transformational sideboard.

The Red cards seemed to give new life to his quest for the best configuration. He laid out the best Red and Black cards and suddenly the room lit up: this setup looked a lot more stable. The creatures were average but the removal was deep (Plague Spores, Tribal Flame, Soul Burn, Singe and Smoldering Tar).

His Blue didn't look brilliant but worked well as a splash color: Exclude, Confound, Vodalian Serpent, Hunting Drake and Sleeper's Robe. The deck was starting to come together.

He briefly considered splashing a bit of white but that involved spreading his colors too much, even with the help of Terminal Moraine. After completely settling in those three colors the artifacts came in: a Sparring Golem and a Phyrexian Lens.

The card piles were up to around 25 cards. It was time to cut. The Lens and the low to medium cost of most of the cards seemed to point to a 17 land deck, thus with 23 spells. The finishing touches took a long time. Alex first made sure he had enough time, by checking the clock, and then carefully considered the cards.

Sometimes settling the final 22 or 23 cards is the hardest part. All the cards seem perfect for the deck but you really want to stay as close to the minimum limit as humanly possible. The best example of how hard this can be was the agonizing moments the American took over the Singe. The card went to the sideboard and came back after a long consideration. The last card to leave was a Hypnotic Cloud.

At the end, Shvartsman was not very happy with the deck, calling it average. He felt he had nothing spectacular but he predicted it could give him a 5-2. His transformational U/W/b sideboard includes a Hypnotic Cloud, Ertai, Shackles, Hobble, Benalish Trapper and several other good cards but he probably won't use it since, in his own words, it involves too many structural changes.