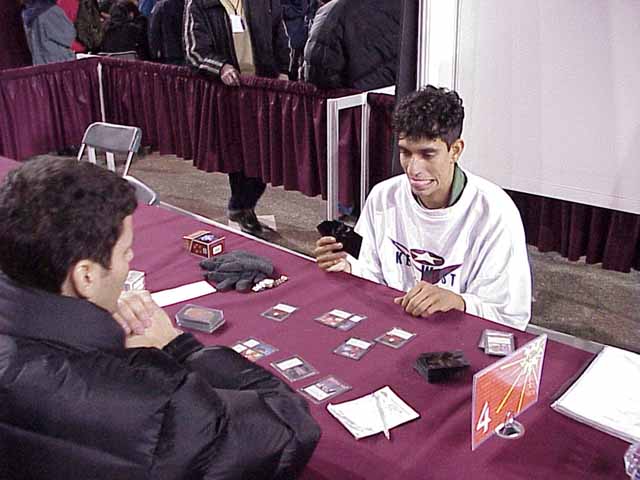 Alex, like his fellow Brazilian Eduardo Texeira, is playing a Covetous Red deck, a deck based on Wildfire to control lands and creatures, all the while playing loads of fast artifact mana in order to keep casting powerful spells and creatures like Covetous Dragon, Masticore, Temporal Aperture, Tectonic Break, etc. The deck is a mana control deck par excellence. 4 Wildfire, 2 Tectonic Break, 2 Mishra's Helix, 4 Rishadan Port. After sideboarding, in come the 4 Boils, 1 more Tectonic Break and 2 Impending Disaster. Mishra's Helix in a deck featuring Grim Monoliths, Thran Dynamos, Worn Powerstones and Voltaic Keys is jut obscene, usually tapping all of one's opponents' lands during is upkeep, not allowing him to cast anything at all during his turn. This effect, coupled with Rishadan Ports is enough to shut down ANY deck that had a slow start or that fell prey to the dreaded manascrew. And with Wildfire to kill mana-creatures like Birds of Paradise and Llanowar Elves, there won't be many mana-sources on the other side of the table. This deck's toughest matchup is Replenish, because unless the Wildfire player plays extremely fast and gets an early Helix or early Wildfire, the game is over, because there's nothing Wildfire can do to stop hordes of enchantments coming his way. The deck usually wins with the help of its beef: Covetous Dragon, hence the deck's name: Covetous Red. But the other game-winner is, without a doubt, Masticore. This 4/4 creature for only 4 colorless mana allows you to gain board control and beat your opponent down. And with Temporal Aperture to continue playing spells with a Masticore down, it's drawback won't bother you much at all.

Alex has been playing Magic for just over 5 years now, since Ice Age in 1995. He is from Brasilia, and is a member of Brazil's Team Brasilia IFG (which, according to Sousa stands for "I Feel Good"), which also put team member Eduardo Texeira into this year's Latin-American Top 8. Both will be attending this year's World Championship in Brussels this August.

Alex's first match in the Top 8 pits him against fellow Brazilian and friend, Carlos Romáo, who is playing a Ponza deck. Ponza is basically a mono-red land destruction deck (although sometimes it uses Green to sideboard Tranquility) that uses cards like Stone Rain, Pillage, Rishadan Port, Tectonic Break and Avalanche Rider to destroy the opponent's lands and mana-producing artifacts, all the while playing Shocks, Seal of Fire, Hammer of Bogardan, Cave-In and Earthquake to control the opponent's creatures and damage him. It typically kills with Masticore, Ghitu Encampment, or when the opponent concedes due to his lack of permanents! This matchup will be like the finals of last year's World Championships in Tokyo when Kai Budde faced Mark Le Pine, Budde with a Wildfire deck and Le Pine with a Ponza deck. Back then, however, both decks were better. Just as before, however, Wildfire is the favored deck in this matchup. "Ponza simply cannot deal with 6/5 flying creatures", said Sousa. One thing is for certain, though: in this matchup the key is to destroy the other player's lands first and keep the pressure coming. If the Ponza starts destroying lad on turn 3 and doesn't stop, it can and will win. But if the Wildfire player gets the broken Monolith + Voltaic Key +