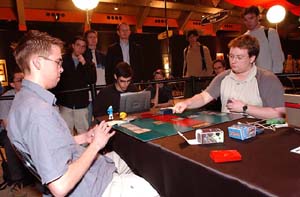 While the staff finished setting up the Masters area the took the time to discuss the match up and their first day at the Pro Tour. Thoren, also known as Jens "Broken" Thoren is one of the best Europeans players around, with a rapidly increasing resume and a stellar reputation. Yesterday he played the incredibly long match against Chris Benafel.

Alexander Witt is another of the huge group of very good Dutch players parading through the Pro Tour Circuit. He is the Cinderella story in this Masters: he grinded his way through the Gateway to get here.

On the last Masters he had already grinded his way to the Gateway finals only to fall in that final hurdle. This time around he has made all the way to the quarterfinals. Lets find out who reaches the semifinals.

Witt opened up the hostilities with a turn two Werebear. Thoren Brainstormed before letting it through. On his turn he Merchant Scrolled for Force of Will.

Alexander Gushed leaving mana open to drop something. He found a Meddling Mage and tried to play it. Thoren Forced the Pikula out of the game. The Dutch dropped a second Werebear and passed the turn.

A Powder Keg showed up heralding the future death of the Werebear duo. Meanwhile both players jockeyed to improve their hands and mana base. With five cards in his graveyard Witt tried to play Mystic Enforcer.

Thoren cast Counterspell and despite a Gush the Dutch couldn´t find a way to force the monster through. The Keg ate up the Werebears with Jens still at a very healthy twelve.

Just to be safe the Swede played a second Keg. A Werebear showed up as the crowd finally decided to check out the match turning the surrounding area into a huge Babel tower.

On and on Alexander Witt´s spidery arms tapped land and played card-drawing spells churning through his deck like a well-oiled machine. Finally Thoren woke up: he played the Accumulated Knowledge he got with Intuition and used a Merchant Scroll to fetch out the fourth one. With his hand now full he seemed ready to take control of the game.

The now huge Werebear brought Thoren down to four before the second Keg took it away. When it did Witt Sworded it. After long deliberation Jens Thoren let it resolve. He would now need to combo Witt twice.

Sapphire Medallion made into play and Thoren countered Witt´s first Orb. The second, however, forced him to play a Powder Keg tapping out. Witt took the opening to play Werebear.

Despite the fact that the Keg could eat the creature in two turns Jens Thoren was only at four. All the Dutch needed was a final chance to send the beast into the Red Zone.

The Swede dug deep through his deck but couldn´t find a way to stop it. On the next turn, as Alexander Witt reached for his Werebear Jens Thoren scooped.

The arrival of Thoren´s support crew worked some evil voodoo on Witt´s deck forcing the Dutch to mulligan. Thoren came out with a second turn Powder Keg, third turn Merchant Scroll for Intuition.

Tired of all this one-sided action Witt used Brainstorm and Flooded Plains to get rid of some useless cards before dropping Quirion Dryad. Since Thoren didn´t seem interested in stopping him he got into card drawing mode with Gush and Sleight of Hand. 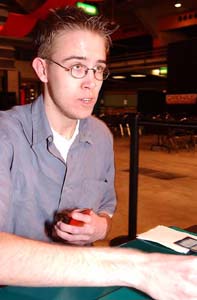 On the following turn he played another Sleight before attacking for four. On the end step Thoren fetched out Accumulated Knowledge with Intuition. He casted the third one and then used Merchant Scroll to fetch out the fourth.

Meanwhile Witt just stared at him unable, or unwillingly, to interfere. On his turn the Dutch played Seal of Cleansing and lost his Dryad to the Keg. Thoren dropped a Medallion and let another Quirion Dryad resolve.

The Swede was still at sixteen but Dryads do tend to grow at alarming rates. Alexander went for Meddling Mage and Thoren answered with Accumulated Knowledge. Afterwards he Pyroblasted the Pikula, still on the stack.

Another Merchant Scroll gave Thoren a Force of Will and he set up to drop one of the two Morphlings in his hand. Sadly for Witt he couldn´t even begin to put up a fight.

The Morphling resolved and Alexander tried to slow things down to a crawl with Winter Orb but Thoren was ready with the Counterspell. The Dutch now had his opponent tapped out, although with a Force of Will and a full hand.

Still the best he felt brave enough to try was a fully charged Werebear. The first Morphling attacked and the second one joined the fray, much to the joy of some of the spectators.

Things were looking very grim for the Dutch side as the Superman tag team promised a swift end to this game. Witt tried to fight back with Mystic Enforcer but Thoren had Counterspell to stop it. 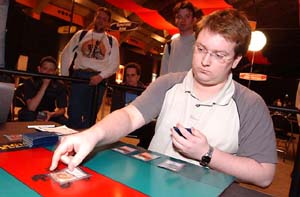 Despite Witt´s best efforts his two creatures were no match for the Morphlings. He even added a second Werebear to his army but Jens Thoren slowly and carefully mastered his Morphlings into victory.

A Sleight of Hand started the third and decisive game. It was quickly followed by a Quirion Dryad. Thoren deemed that a threat big enough to tap out to play Powder Keg. Two Force of Wills later the Disk-like artifact resolved.

A Seal of Cleansing took out the Keg before it could eat the Dryad and while Jens Thoren was ready to stop Meddling Mage he had to let a Winter Orb through.

The clock, a very big and quickly expanding green clock, was ticking for Thoren. He had one turn, maybe two, to find a good answer to Quirion Dryad. His "Intuition for Accumulated Knowledge" plan apparently yielded nothing and Alexander dropped a second Quirion Dryad to the table.

The silent Swede drew, smiled and extended his hand.

Final Result: Alexander now advances to the semifinals where he will face Kai Budde and his Donate deck.