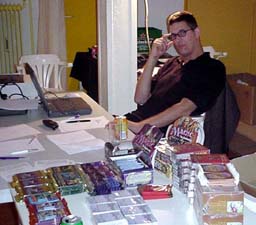 The second night of night side events attracted a lot more people than the first one. The reason for this was probably twofold; the main event ended earlier than yesterday, so there were more players lingering around at the site eager to play some side events and secondly, this night would be the night of the Power 9 tournament...

The problem however, was that there were at least 40 players necessary to compensate for the investment organiser PS-Games made to provide the Power 9 set. While many players wanted to play, a lot of them also would like to see more of the city of Amsterdam, especially the nightlife. So at the time the tournament was supposed to start, there just weren't enough players and they had to settle for a draft or two.

And those drafts just kept getting started. Around eleven, the judges decided to do an 'all-judges' draft. But they weren't the only 'tournament' people there. On the third floor of the ABCTreehouse, Phoenix Foundation was seen drafting and later at night, so were Les Plus Class member Gabriel Nassif and Pro Tour winner Farid Meraghni, doing money drafts.

But there were more epic struggles going on. After playing a number of side events, Dutch Magic players Maarten Ferguson and Pepijn van Abbe known not only for being all night side event players but also for being pretty good all-round players, still hadn't won a single draft, even after competing in lots of drafts. Halfway through the night Maarten came up to me to borrow a T-shirt because he was very cold. The T-shirts were only given as extra prizes to the winners of the side events, which meant that he now definitely had to win on. It was pretty ironic that when Maarten finally made the finals, his opponent was Pepijn. In this clash of side event titans, Maarten was pretty much on the receiving end of some beatdown and his Shieldmage Advocate was working overtime to keep him alive. Over the course of this very long game, Maarten kept returning pretty good cards to Pepijn's hand like Shelter and Sudden Strength instead of just lands or other bad cards. Pepijn didn't complain though and raced with all these cantrips through his deck... until it contained only a few cards left in his library and he got decked by Deep Analysis. This made Maarten the rightful owner of the shirt he was wearing at last!