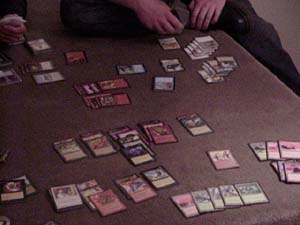 With the Beurs van Berlage almost deserted, Magic players from all over Europe went to the ABCTreehouse, an art-gallery where the nightly action would soon start. While there weren't that many players at midnight, it soon became quite a happy bunch. The presence of drinks and some of the other treats a city like Amsterdam has to offer created a really laid-back atmosphere, the keyword was definitely 'fun'. This was also reflected in the formats they came up with. Ever played a Revised draft in 2002 or participated in a Saga/Mirage/Alliances Sealed Deck tournament?

The players saw this Sealed Deck monstrosity as the funniest format, because it created a lot of weird new card interactions that probably no one ever tried out before! Instead of figuring out all kinds of new combo's, other players just did a draft or two and then fell asleep on a couch.

This doesn't just happen to players; judge Oli Bird form Ireland was also caught sleeping after finishing up a Grand Prix Trial tournament for Grand Prix-London at 3am in the morning. This tournament had started way later than scheduled in the main hall, but had to be finished in the ABCTreehouse. Eventual winners were Peter Adams playing Mono Black and Till Frederik Protzek with his Blue/Black Braids Beatdown Block build.

When the side event area finally closed at 8am on Saturday, there were only a handful of Magic die-hards left... and most of them were asleep.