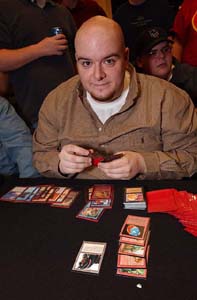 Magic may be celebrating its tenth anniversary this year, but some players have decided to have a little old school fun today. Okay, "old school" isn't even an accurate description. How about "ancient"? Better yet, "classic". Six players got together today to play sealed deck with Alpha starter decks, and Arabian Nights booster packs. When I went over to see what was going on, there was a mob of spectators looking on in awe and drooling over fresh out of the pack, mint Moxen and dual lands. Cracking open Alpha starters is something every player dreams of at one point or another, but actually playing with them is something entirely different. Think about it. These starter decks were in storage for almost ten years before being opened today. It's a lot like good wine- with age brings more enjoyment.

Mark Jeronick had the idea to put this thing together, and owned the cards. "I had a bunch of old Alpha laying around and I was able to pick up some fairly inexpensive Arabian [Nights], and I thought it would be fun." Of course, an opportunity like this does not come cheap. Admission cost $625, and the rares would be drafted at the end, with the winner getting to pick first, second place the second card, and so on. To sweeten the pot a little, a Black Lotus will be given to the winner as well. As for the cards? "Yeah, they're a little hard to find these days. I bought these in 1995 for five dollars a pack."

For Jeronick, it's a fairly good profit regardless of whether he wins or loses. Still, this is mostly about fun. "I've bought and sold some since then, and I sell them online for $500. So, throwing them out here for $625 with two other expensive packs is a pretty good deal. I'm pretty much breaking even." Sets weren't exactly designed for limited play back then, so strategies will have to adjust. "A lot of these decks are going to be three or four colors because of the limitations on card numbers. It's going to be fun and different." If you are jealous about missing out and have some money to spare, don't worry. You'll have a second chance. "We're going to do it again at Nationals. It'll probably be six packs of Arabian per player, and we're going to draft 'em. It'll be about the same price, like $550-$600." 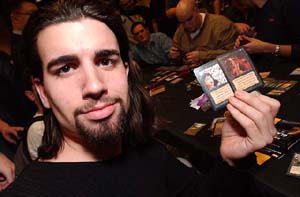 Some Pro Tour players were involved as well. Chris Benafel was entirely focused on his deckbuilding with Eric Froehlich by his side, and wouldn't give me an interview. Not surprisingly, Ed Fear was more than willing to talk. "I've got a little green/black beatdown deck going here. I have three Naf's Asps, which from my experience in the Alpha/Arabian/Arabian format is really key. (laughter) They've never failed me. I'm thinking I can get some early Naf's Asps beatings backed up by my big man, which is the Ironroot Treefolk, and Thicket Basilisk."

Since all the players were building their decks together, it was easier to judge the metagame. "I have a weaker deck than most of the table I think, but I have smoother mana than most. I'm playing only two colors, although I may splash blue for Tim (Prodigal Sorceror) or Power Sink. I have some fairly smooth mana and am hoping to get some beats in there before other people can get their feet under them. That's the plan." He was also quick to point out that it required a lot of work by Mark to find people who were willing to pay the hefty admission cost.

"Mark here deserves a round of applause for taking the whole day wandering around, trying to get people in. He was very persistent and easily could have given up on it." Fear was quick to point out that for him, this was money well spent. "This is great. If I took this money and went home and bought some product or sold something, I'd forget about it in a month. But this I'll remember for a long time. This stuff is great."