The top performers of Day One gathered together on Day Two to drink coffee together, reminisce about the last time they saw each other (that is, earlier that morning), and count up their brethren: 169 in all. Eight of those 169 sat at the top table to start off Draft Three. In draft order: 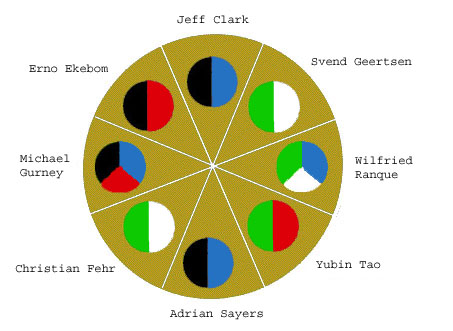 Geertsen, Ranque, Sayers, and Ekebom were undefeated in Day One; the others were a very tall 6-1. A full listing of cards drafted can be found here; this analysis will refer to it frequently. This will open another browser window and let in some Internet air.

The first notable thing about this draft, in review, is the extremely low instance of hard, black removal in the common and uncommon slots:

So what WAS there, you ask? Well, more Viashino Grapplers and Phantasmal Terrains than you'd care to shake a stick at, thank you very much. But also some true limited bombs, and a seemingly endless supply of quality creatures...especially Thornscape Apprentice. There was also plenty of blue pacing goodness, with favorites Exclude and Repulse making strong appearances.

The second key dynamic in this draft was a a great deal of very intricate cooperation, punctuated with one clear spot of side-by-side competition.

Start with the competition. Early on, Svend looked like he was going to have a bad draft, with Armadillo Cloak and Benalish Trapper giving way to a dabble in red and "safety" pick in a sack-land. At the same time, Wilfried Ranque to his left picked Thornscape Apprentice and then Armored Guardian. Come third pick, he chose an Apprentice from Stormscape over Thornscape, and so Svend looked safer in green; but then later picks in Kavu Climber and Rooting Kavu made it seem as though there were two green-white drafters right next to each other.

Further downstream, there were clearer lines being drawn. Yubin was able to pull out most of the green beef, as well as good red synergy (Hunting Kavu, Lightning Dart) to use those two colors solidly. To his left, Adrian Sayers was one of three black-blue drafters; when he opened a Tsabo's Assassin to start the fifth pack, he pulled both a bomb and one of the scant removal cards in the entire draft. With three seats to his left feeding him black, Adrian had a very good draft indeed.

Christian Fehr pulled an Armadillo Cloak out of that Assassin's pack, which solidified an already strong green-white signal. While Svend and Wilfried fought for those same colors in a distant land, Christian had at least a two-drafter buffer to either side (three to his left, actually) and he was able to scoop up tasty tappers and strong white creatures, as well as a bomb that I'll get to in a moment.

Perhaps the most delicate balance was struck between Michael Gurney in blue-black-red, Erno Ekebom in black-red, and Jeff Clark in blue-black. While it might seem from that sentence that Erno was ill-advised to pursue his colors, the picks available to him and his neighbors never made it seem like they were fighting very hard at all. One example of this was pack eleven, when Jeff took an Urborg Drake, passing a Recover to Erno, who passed a Vodalian Zombie to Michael. Another example is pack 17: watch the picks made that allowed Erno to get an Addle and Cinder Shade on the bounce!

Yet another example of this was pack eight; check out what Erno picked (I told you you should keep that window open), how Jeff found a perfectly viable second pick . . . and see what made it all the way to Michael! Given the low rate of removal already established at the table, this is remarkable.

That Emissary actually plays into the next pack, and the best example of basic cooperation between two players clearly not in each other's colors. (This is for the newer drafters among us.) Christian, with his sixth pick, took a Benalish Emissary: a nice card, but not as good straight-up against the Shivan. Many players new to Rochester draft might be tempted to take the Shivan Emissary, thinking that they need to "get rid of that". But Christian let it pass, and the next pack opened contained a Rout. Michael let it go by, and Christian's green-white deck now contained one of the very few removal cards across the table. Incidentally, this tradition of cooperation rewarded another one of the trio; Jeff Clark got perhaps the best bounce of the draft with Duskwalker and Recover.

Back to the two competing seats, Svend and Wilfried. Svend found a workable home by suggesting a splash of red and then taking every Thornscape Apprentice that came his way (he ended up with three). Wilfried amazingly ALSO dabbled in red -- he ended up with two Hooded Kavu, one as an apparent peace offering to Svend since he passed one of those Apprentices -- and then came back a bit to blue, reinforcing his Armored Guardian with a Zanam Djinn, Sapphire Leech, and Vodalian Serpent. While there's no doubt the two hurt each other through the first two packs, by the start of the third pack, they managed to stay largely out of each other's way.

Enough talk! You want to know more, see the full draft detail. Given its lack of removal and unusual intra-color cooperation, it ranks as one of the most intriguing drafts at this Pro Tour.