Here were the sharpshooters of Day Two, going into the fourth draft (in seating, not seeding, order):

The draft saw a little bit of competition for colors -- particularly between B/U and B/R enthusiasts -- but was generally cooperative and had some very interesting strategies employed.

Four things to notice about the draft, which you can see in detail here.

Thing One: Finkel passed the Rout. Well-established in green-white by pack 14, and possessing one Armadillo Cloak, Finkel opened a pack with a Rout and another Armadillo Cloak...and took the Cloak.

Let's look at why that might happen. There are two schools of thought on this pick (and if you think this author is going to tell you which one he favors, you are nuttier than a Deranged Hermit's pet sanctuary). The first: it's Rout. Mass creature kill is good in limited; this is the best. Therefore, if you're anywhere within earshot of white in your deck, you take it.

The second school of thought: you may always favor Rout if you're not established in strategy; but perhaps there's another way to go if you're white green - multiple small creatures (Finkel ended up with four Llanowar Knights) and early beatdown. Armadillo Cloak fits a mana curve that will see your opponent die before they are likely to find/play the Rout you passed to them.

The table around Finkel seemed split between the two schools of thought, with half barely noticing Finkel's pick and half choking on their own saliva. Benedikt and Erno, both heavily into black and nowhere near white, let it pass as well...and it ended up in Michael Pustilnik's deck, which was already dabbling in white.

Funny side story: some in the press room (they will remain nameless and no, this author was NOT among them) felt that Mike may have kept the Rout in his sideboard, given the high quality of blue and black picks he got. Your intrepid reporter approached Mikey P. and asked, signaling that he knew the answer already so that the Pro player would not think him terminally stupid. Mikey smiled and said:

"No, I don't have it maindeck. I only side it in when my opponent's playing with creatures."

Thing Two: Gary Wise chose Explosive Growth over Canopy Surge. With absolutely no hesitation, Gary choose a fourth pack Explosive Growth second pick, and a Canopy Surge in the same pack fell all the way to eighth pick, where Finkel combined it with a ninth-pick Kavu Climber for the Wheel of the Century Award.

Two schools of thought here, as well. The first is Gary's own unapologetic perspective; when asked about the pick he was very straightforward and clear: "Explosive Growth was a better pick than Canopy Surge, there." He emphasized the mid-combat virtues of the card, as well as the break-through potential for an unblocked creature or apparent chump-blocker. His five-color green deck, like Finkel's green-white, emphasized a small creature rush...and Explosive Growth is the card for such a deck. Several Pros and other observers definitely agree with Gary.

The other school of thought maintains that Canopy Surge can work as a finisher as well, and that so early in the draft, when everyone including Gary was still settling into colors and deck types, the Surge is the "safer" pick.

Again, this author would not presume to pick one opinion over the other. It is certainly clear that Explosive Growth itself, independent of any other options, was highly favored throughout this draft, and the previous three, usually getting picked second or third, just as Gary did.

Thing Three: Benedikt finally got reckless for Red. Reckless Assault, that is. All draft long, Benedikt had a hard time fighting for his obviously favored black-red approach to this draft. Erno Ekebom frequently dipped into choices that both helped his deck and hurt Benedikt's, including Cinder Shade, Plague Spores, and Lightning Dart. By the middle of the third set of packs, it seemed that Benedikt was doomed against hope of any bombs...until Erno finally showed mercy, and took a Duskwalker over Reckless Assault in the 23rd pack.

When this author was growing up as the fourth of four children in an Italian-American family, it was important to cultivate "rapid reach" skills to get the second helping of food you wanted at the dinner table. Apparently, they teach those skills in Austria as well; barely anyone could see Benedikt's hand as it flashed out and attained his deck's one true bomb. His solid creatures and moderate removal now had a champion to assure victory.

Thing Four: There is such a thing as punishment. Check out pack 16, where Michael G. scoops up the Armadillo Cloak Gary doubtless had his eye on. (This was the only green card Michael picked; but he did play it in his deck.) Now look down at pack 18, where Gary's hand slipped and took the Samite Archer that would have fit perfectly in Michael's own blue-white deck. (Again, the card WAS played in the deck of the drafter.) In both cases, there were other cards that may or may not have been superior but certainly would have fit fine with theme (Noble Panther or Benalish Lancer for Michael, Strength of Unity for Gary); but the opportunity for a friendly jab may have played a part in tilting the scales elsewhere.

The colors that the table ended up with: 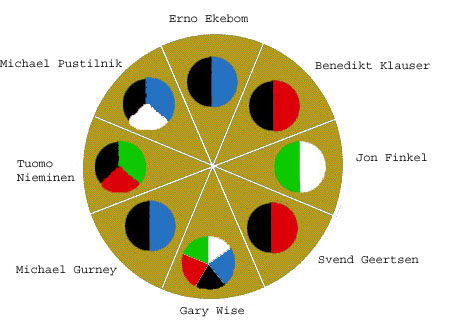 One final note: upon seeing the draft picks, but before knowing the final decklists, Adrian Sullivan made a bet with this author that Jon Finkel would NOT splash his Zanam Djinn. To Adrian, the reporter has this to say: first, thanks for the easy five bucks. And second, Adrian, it helps if you can really enter the mind of Jon Finkel and understand him. You know, think like him, play like him, dominate like him. You gotta BE Jon, Adrian. Don't worry, you'll get there. Until then, keep your feet on the ground and keep reaching for the stars!