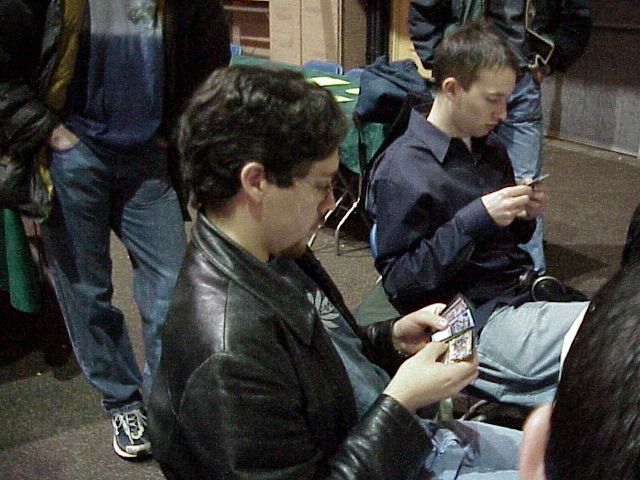 Andrew Johnson didn't just go 8-0 on Saturday, he went 12-0 in games. And he did it with a deck that almost everyone else in the room would have built differently. Eschewing the Spinal Embrace, Stormscape Battlemage, Cavern Harpy, and Faerie Squadron that he was dealt, Johnson opted instead for the much more aggressive red/green/white build, but no one was arguing with him after he ran the table. He sat down at table 1 on Sunday morning with Grand Prix Amsterdam champion Chris Benafel feeding him and he, in turn, was feeding reigning Overpower National Champion Philip Keffer. The rest of the table was Grand Prix Dallas champion Matt Vienneau, Pro Tour Dallas Junior champion Justin Schneider, Pro Tour DC and Grand Prix Manchester champion Darwin Kastle, 50-year old Tom Swan, and Pro Tour London champion Kyle Rose. Not a bad table at all! Vienneau commented before the draft "Darwin and I think this proves the validity of the sealed deck Pro Tour." They each made Top 8 in Atlanta.

Johnson's first pack included Exotic Curse, Fact or Fiction, Plague Spores, and Shackles. Johnson organized the pack by color so he would know what his neighbors were about to see and so he could remember what was missing once he got it back for his 9th pick. Then he drafted Fact or Fiction. Benafel first picked a Recoil and passed him Benalish Trapper, Tribal Flames, and Vicious Kavu. Andrew took the Trapper. Johnson's third pick was obvious: Glimmering Angel. He had to be happy to pick up his fourth pack and see Stormscape Apprentice waiting for him (the green tapper was also hanging out in that pack). He once again sorted the pack by color, a somewhat unusual but very useful habit. His next two picks were straightforward: Sparring Golem and Dream Thrush were the only cards for him in those packs for his blue/white deck. 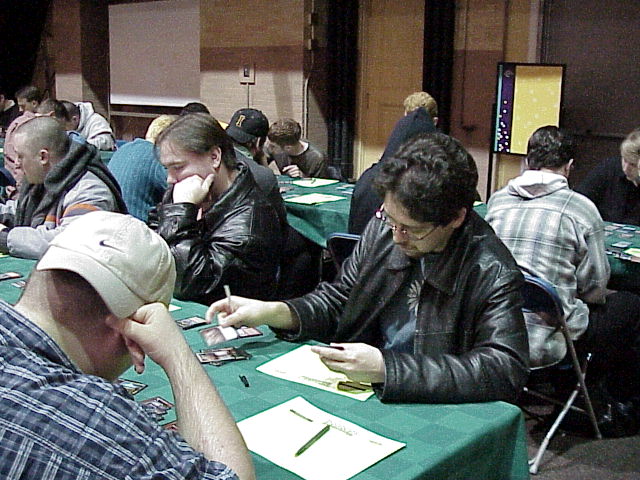 Pack 7 was where things got interesting. When he picked it up it still contained Serpentine Kavu, Thornscape Apprentice, and Fires of Yavimaya. His shoulders slumped visibly because he knew he wasn't really in good position to take advantage of this tremendous opportunity. He took the tapper anyway and started thinking about going green. He then took Aggressive Urge from pack 8 and Quirion Sentinel from pack 9. Sunscape Apprentice (with its underrated +1/+1 ability) and Prison Barricade rounded out the first set of packs with the makings of a solid blue/white deck that might want to splash green. He actually had only two blue cards, but they were quite high quality and his Glimmering Angel was partially blue.

Johnson's first pack of the second set had Glimmering Angel, Tribal Flames, and Wax/Wane as its most relevant cards. He took the Angel and then got passed significantly higher quality cards: Samite Archer, Armadillo Cloak, Phyrexian Delver, and Glimmering Angel. Knowing he already had two of the potentially untargetable Angels he went for the Armadillo Cloak. Pack 3 gave him Armadillo Cloak #2 (over Exclude)! After that things just got nutty: Charging Troll, Llanowar Knight, Kavu Climber (over Galina's Knight), Pincer Spider, Wax/Wane, Kavu Climber! The hits just kept on coming! "Bears" (meaning 2/2's for 2) are all the rage amongst PT drafters and the pro-color bears are the best available, but Johnson passed on Galina's Knight because he knew he was either a Llanowar Knight deck or a Galina's Knight deck - you can't be both (because it isn't possible to create a mana base that will consistently play both of them on turn 2). 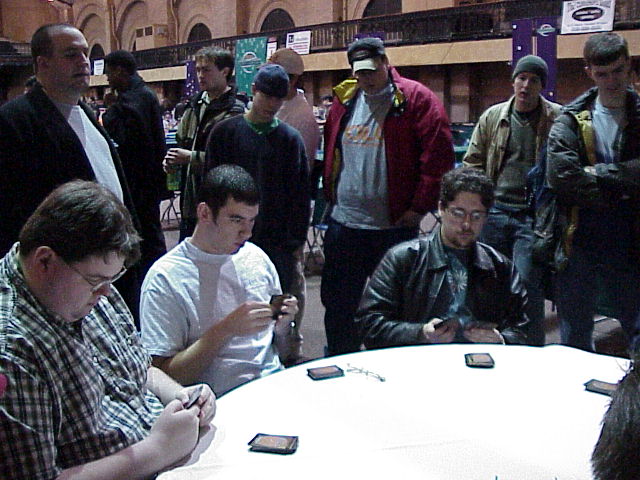 Planeshift was interesting. Johnson took first pick Flametongue Kavu over Thornscape Familiar, Gerrard's Command, and Confound. He already had 20 playable cards so he could afford a potential D-Draft or, if blue stayed as dry as it was after the first few packs of pack 1, he could consider a splash. Next up he drafted Strafe over Stone Kavu and Pollen Remedy, showing a clear willingness to splash. He followed up with Thornscape Familiar - all the familiars are good and this one is the best. Knowing his mana was rapidly getting sketchy, Johnson took 4th pick Rith's Grove and later picked a Darigaaz's Caldera (over Stone Kavu). He passed one Quirion Explorer in order to D-draft a Terminate and then drafted an Explorer from the 6th pack. Alpha Kavu, Samite Pilgrim, and Gerrard's Command all rounded out a crazy-good draft that could have been better still in Chris Benafel hadn't hated a potential 8th pick Thornscape Familiar.

In the end, Johnson decided to splash both red and blue. With two early bounce lands among his 8 green lands plus a Quirion Explorer and a Harrow, his 8-6-1-1 mana base seems reasonable, though not ideal "I would have cut the blue but then Glimmering Angel would be just awful." Unless he gets mana-screwed, I don't see any reason for Johnson to drop his first game in round 9, 10, or 11.