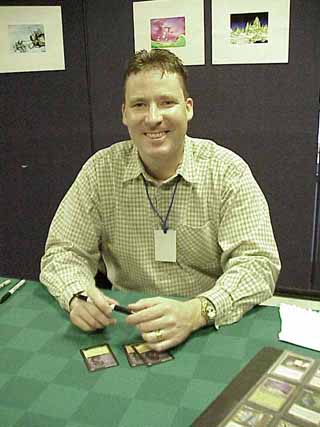 Tomas Robert Wänerstrand is a first generation Swedish-American, and he grew up going to Sweden to visit relatives in the summertime. So he enjoyed being in Helsinki to sign cards at the Grand Prix event. "It's nice being here. The cool air is fantastic. It feels like home," Tom says.

The 34-year old artist has been making illustrations for Magic: the Gathering since the start in 1993. "Jesper Myrfors, who is friend of mine, was the art director for Magic. He started looking for illustrators for the first set, so he tapped into a lot of people he knew from art school or that he knew were artists. He asked me to do some pieces, and I did," Tom explains.

His contributions to the Alpha set were the artwork for Royal Assassin, Pirate Ship and Samite Healer, but Tom is not proud of those pieces. "I think the artwork is pretty poor, they're just not well done," he smiles. He is far more satisfied with the pieces he's done lately, and he feels that he has improved a lot since then. However, he slightly regrets not doing more artwork back in the start: "If I had known then what I know now, I would have quit my job and done it full time."

So while Royal Assassin probably is his most well-known piece, Tom himself prefers for instance Winter's Grasp. "I enjoy paintings of landscape, mountains, oceans - and boats," he smiles. The Seattle resident has done a lot of boats and ships over the years, Ghost Ship, Pirate Ship, Urza's Blueprints, War Barge, and Capsize to mention just a few. "I live in Seattle surrounded by mountains, water and boats, so it's natural to want to paint those kind of things. If I don't do artwork, I go skiing or boating, so there you go."

Tom was pretty busy in Helsinki. He was present on the site both Saturday and Sunday, and there was an even stream of people wanting to get a free copy of the Blood Moon artwork or to get cards signed - mostly Ravenous Rats and Capsize. The rats artwork is really good, and the evil-looking little rat crouched on a stone with others lurking behind it has become quite popular. "It wanted to do something a little bit different," Tom says, so he chose the 'posing' version instead of drawing a rat in motion.

While Tom occasionally gets very specific descriptions from the art director of Magic, he sometimes gets a lot of freedom as well. Then he normally draws inspiration from what he can find around him. Tom has done artwork for a lot of different games, including Vampire: the Eternal Struggle, Battletech and Netrunner, but he enjoys doing Magic art the most. "It's much more fun to do pieces that are fantasy related," he thinks. In fact, he enjoys it so much that he wants to continue doing it for as long as he can. "For as long as I can and as long as the art director wants to use me," he laughs. "It is a lot of fun, and it is also a lot of fun to go out and sign cards. You get to interact with the people of the game."