his weekend, many decks are loaded with a seemingly prerequisite four copies of Korlash, Heir to Blackblade. While staring across the table at the wielder of the Blackblade, masses of players have had the opportunity to notice a name new to Magic-Daarken. It seems strangely appropriate that a man named Daarken would unleash art as daark as Korlash unto the world. It also seems appropriate that Daarken would be at Magic Weekend. Daarken has been signing, you guessed it, Korlashs all weekend, but found the time to rest his tiring hand to answer a few of our questions. 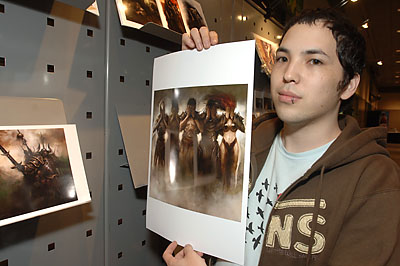 Daarken has made a big splash on Magic cards in a very short amount of time.

What's your name and where do you live?
The name I use for art is Daarken, and I'm from Temple, Texas. I now reside and work in Fairfax, Virginia, though.

What's your current day job?
I'm a digital concept artist, but I still like doing lots of freelance artwork.

What was your first Magic card?
It's funny, but my first Magic card was Korlash. It was really unexpected that my first card would be so high profile. I find it really nice that it's seeing a lot of play, and that people seem to love it.

It was an open-ended art description, so I had a lot of room to play around with it. My only real notes going into it were that he had to be really cool and really impressive…which was daunting. (Magic Art Director) Jeremy Jarvis gave me a copy of the original Richard Kane Ferguson Dakkon Blackblade, and told me to take some cues from it. I decided I just wanted to capture the attitude of Dakkon. I'd like to think that Dakkon and Korlash are both iconic and attention-grabbing. It's hard to confuse them with other pieces of Magic art. More than style, I just wanted to get the spirit right.

What cards have you done since Korlash?
So far, I've done Bitter Ordeal, Grave Peril, and Korlash from Future Sight. In Tenth Edition, I did Bog Wraith and Stronghold Discipline. (Click here to see all of Daarken's cards.)

Is it weird having your all your cards be black cards?
Not really…I really enjoy doing them, so far it's been okay for me to be pigeonholed as a guy that just does black cards. It's been kind of a comfort zone for me to get started. Every card has been an enjoyable process, and it all still seems new. I know that only doing black cards is not my future, because I just got commissioned a green card from an upcoming set. I think Jeremy Jarvis just wanted me to see my voice, before moving me on.

How did you get your start doing Magic?
I began doing interior artwork for Dungeons & Dragons books. Wizards of the Coast owns both D&D and Magic, so it was easy for me to transition from one to the other. I think Jarvis must have seen some of my work and thought it would be portable into the Magic world.

I did play Magic, quite a while ago. I played quite a bit around the Revised/Fourth Edition era.

What are your favorite cards from that era?
I'd say Blinking Spirit. It has an interesting composition. I also like Shivan Dragon from that era, because it has a good sense of action.

Is your process for Magic and D&D different, and what's your process for starting a new piece?
I guess I'm weird in that I don't sketch or do thumbnails. A lot of artists are always sketching, and you always can find one with a notebook. I tend to just dive into a new piece. My painting process begins with the painting itself.

So you don't draw at all?
Not really. I just begin with a general idea of what I want, and then start with a shape and a color palette. I work with the shape and the color, and move towards my final piece. It's a little strange, because there is a sketch review process at Wizards, and I usually submit a close-to-finished piece at that phase. I tend to have shapes and colors that I feel are mine.

What kind of Magic pieces would you like to do in the future?
I think lands and landscapes in general would be pretty cool. I think I could do a land that has my signature on it.

What is your advice for someone that would like to get into Magic illustration?
Start with drawing what you're most comfortable with, and find people that really value that voice. Once you feel you have solved that style, then I'd try moving on to the next task.