arlier, we had an opportunity to chat with Magic artist Daarken, and pick his brain on being a new artist in the Magic community. Also attending Magic Weekend and signing autographs galore is noted veteran artist Dan Scott. We were lucky enough to get his opinion on a variety of subjects.

What's your name and where are you from?
Hi! I'm Dan Scott, and I'm here from Kansas City, Missouri. Make sure you put Missouri and not Kansas, I'd hate to end the interview here.

What was your first Magic illustration and how did you get it?
My first piece was an Unhinged card, Bosom Buddy. It's a little weird that my first card was in an Un- set, but I was a huge fan of Unglued, so I thought it was kind of cool. I've been playing on-and-off since Fallen Empires, so I've seen a lot of different settings. The Un- sets are kind of fun, because you don't a have a fixed setting to work inside.

To get the piece, I bugged the Magic Art Director for about a year. I'm sure he was sick of hearing from me. In retrospect, my art style probably kept improving over that year, and each batch of new illustrations was a little better than the ones before them. After not hearing anything at all from Wizards for about a year, I got a random phone call, and was assigned my first piece. It was pretty stressful, because I wanted to be really impressive, but the card was essentially a one-shot gag. It turns out to be hard to be funny, but also stylistically good.

What's your favorite piece that you've done thus far?
I think there are about three pieces that I like the best. 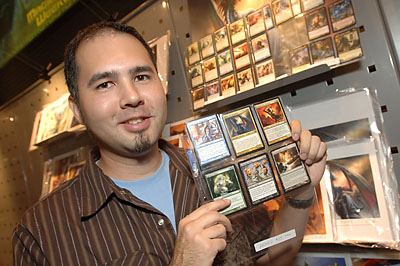 Scott has been at this since Unhinged

Intet, the Dreamer is definitely one of the top ones. It's the piece that fan's like the most, so I tend to like it, too. All the feedback I've heard about it so far has been good. Intet is a little bit of an homage to Magic and D&D illustrator Todd Lockwood. Todd is the master of painting dragons, so a lot of what he does well, I tried to put into Intet. His concept name was also Intet, which sounds Egyptian, so I gave him a kind of Egyptian vibe. He's got a very Egyptian-style chin and forehead. Because he's blue, I took off a lot of his sharp edges and horns, and replaced them with fins and scales.

My favorite piece from an art perspective is Sparkspitter. I tried some new painting tools and brush effects that I've never dabbled in before. It opened up a whole new realm of painting for me. After finishing Sparkspitter, I felt like I had more tools to do my art.

Serendib Sorcerer is my favorite art concept for a piece that I've done. It's pretty cool that a sorcerer is powerful enough to make a dragon bow before him. It's just a neat concept. I also messed around with some new Photoshop effects to get colors and shapes that I hadn't explored yet. 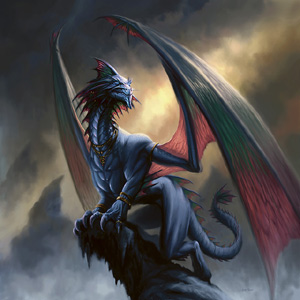 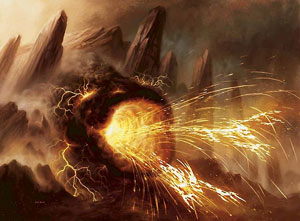 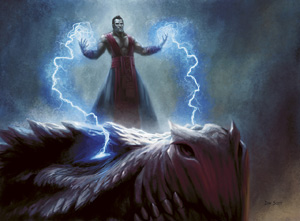 How has the game changed over the past few years that you've been working on it?
I'd have to say that the game itself hasn't changed much for me. Having different blocks always keeps it fresh for me, and having really tight style guides to work with takes off a lot of the pressure. Not all games have style guides as deep and as tight as Magic. The concepts for new blocks are always original ideas, so the work is never dull.

How has your style changed over the years?
My artistic skills keep getting better. I feel like I always have more options and voices to do my work. I grow a little with each card, sometimes a card is major breakthrough for me.

What has been your favorite block to work on?
I was a concept artist for Ravnica block, so I'd have to say that one. I got to design a lot of the characters and creature concepts, so I feel invested in pieces that aren't necessarily mine. I was able to work on the Simic Trolls, the Vedalken, the Izzet humans/wizards, the Golgari gorgons, plant zombies, and a ton of other sketches. I look at the set, and I feel like my style is on a good chunk of it. I'm pretty proud of it.

What are your favorite types of cards to illustrate?
Without a doubt the characters and baseline creatures of a set are my favorite. Players begin to build connections with creatures, and everyone has their favorite kinds of creatures. The other nice thing about creatures is that I believe you have more avenues to tell a story on the card. The player can imagine the creature occupying a real space. When I do a creature, I try to use a "dead-end" street analogy. Would you be terrified, awed, or impressed by this creature being at the end of a long dead-end street? I think if you are, it's a good card.

Alright, Dan. We'd like to get your quick feedback on a few of your illustrations: 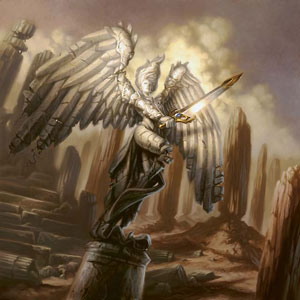 I knew that this card was going to appear on packaging, so I had to nail this one. Because this would show up on cards, packaging, and in magazine ads, I made it larger and more rectangular in composition. I wanted it to be able to crop a few different ways, but to be unmistakable each time. If you know a card is kind of an oddball card, you can play around with the shape and textures. This card was pretty straightforward, and needed to be a clean read. 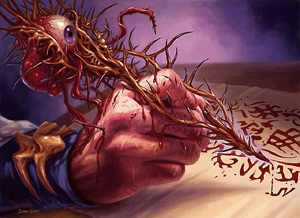 One thing I try to do in my art is find other Magic artists that I think "get it," and dissect what works in their pieces. Donato Giancola can really dazzle you with his artifacts. I noticed in his pieces, he sometimes uses hands to frame his artwork.

There's a bunch of stuff that he's done, where the hands in the piece communicate the action and tone. They also tell you how the artifact is used. I tried to take that concept and magnify it. I wanted the hand in this piece to tell the story.

The art description only asked for a pen that could write in blood. I wanted to show a little bit of parasitism that exists in the (Dimir) guild, and use Donato's hand approach.

This is as straightforward as it gets. They asked me to show a ghostly version of Force of Nature. I painted them one. The one departure I took from the original piece was to include more things that hint at this guy's scale. I wanted him to look GIANT. He needed to be a big ghost of a big elemental. 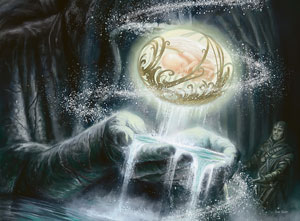 Hearing fans acknowledge my work and knowing people like something excites me.

I knew that since I was dealing with Jeremy Jarvis, and since the competition was on, it shouldn't be a literal fountain. A fountain would have bored all three of us-Jeremy, me, and the fans. I ended up going with something that hinted at eternal life, that has some hidden payoffs in it.