Auction of the People 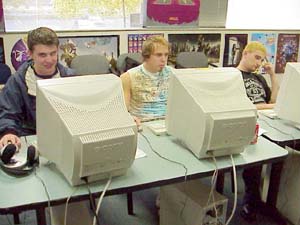 This year's Auction of the People had players desiging decks around a single letter. Any card legal in Online Extended was up for grabs, so long as any of the words in the card name started with the chosen letter. So "M" could get you Morality Shift, Mortal Combat, and Braids, Cabal Minion, but not Nantuko Shade. As always happens, the decks were of wildly fluctuating power levels.

The auction took place online; to read the log of the auction, click here. The decks themselves are available here

The "O" deck is so good it feels like cheating. Starting off with Opposition and Static Orb, it draws ridiculous power from Fact "Or" Fiction, Roar "Of" the Wurm, Call "Of" the Herd and Birds "Of" Paradise. Also sought after would be the F deck, that gets Flametongue Kavu and Fact or Fiction. The beatdown decks would also see a lot of action, what with players starting at lower-than-average life totals.

The dance of the auction is an intricate one. The trade-off between life and cards is tricky to balance. Go too low on life and you can get randomly beaten out. Go too low on cards and face manascrew at every turn. That's extra trouble when a lot of the decks up for grabs have awkward basic-land manabases. The other thing to bear in mind was how aggressively to bid. Fight too much too early and you wind up with a deck at unplayable starting conditions. Wait too long and you get stuck with one of the clunkers.

Things were kicked off by Shvartsman at the top of the standings. He wasted no time choosing the "F" deck. There was lots of early action, with Nitter in the third seat dropping it to six cards and twnety life. Still, everyone was interested, bidding it down to six and thirteen before Price bowed out, saying "I'll let the real men fight it out". Ostrovich, Ruel, Nassif and Pikula followed suit. Shvartsman re-asserted with 6-12. Thoren, Nitter and Walamies jumped. Davis tried 6-11, that cleared out everyone but Dave Humpherys, who went 6-10. Shvartsman and Davis couldn't go any lower.

Next was "L is for Looter", a deck with a reasonable mana base and plenty of good burn. Thoren started it at 7-20. Nitter cut to the chase with a bid of 6-16, shocking the rest of the bidders. Romao and Wise got in, but six players got out right away. Ruel inched in at 6-13. Nassif thought hard. Romao rooted for him, saying "Go Nassif, break him!", but in the end he couldn't handle it. Neither could anyone else. It got back to Wise, who dove in with 5-20! Ruel sat down.

"We succeeded in getting Gary to leave the room. Good work everybody." - Jon Finkel

Next up was madman Nitter. He asked for the "Q" deck, composed of a bunch of elves to speed into Quicksilver Dragon and Questing Phelddagrif. Everyone wanted a piece of this deck, and it got down to 7-12 for Dave Price. Ostrovich and Ruel bowed out ("Are we talking about the 26 land 24 mana accelerators deck?" - Olivier Ruel) as did Nassif. Pikula rocked the boat with a bid of 6-20. For every player who hated the deck, there were plenty willing to play it at six cards. Shvartsman, Nitter and Finkel all got in the fight. Eventually Shvartsman scored it at 6-13. 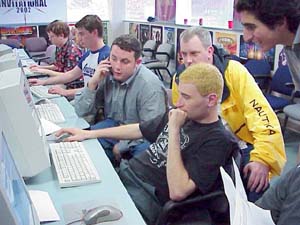 The Champ, Carlos Romao chose next. He went to the consensus "Best Deck": "O". He tried 7-20. Walamies jumped to 7-15. Davis put his foot down with a monstrous dive to 5-15! Finkel described Davis as "Going Nuclear". The fight was far from over. Kibler and Finkel each tried to get a piece. Price underbid with 5-12.

"I don't get much happiness, I've got to take it where I can get it." - Dave Price

Ruel had had enough. He weighed in with the ridiculous bid of 4-20. Everyone left at that point, and had some choice words for his decision.

"Olivier is going for the PT win" - Tomi Walamies

The G deck followed, a very reasonable red-white beatdown deck, started by Tomi Walamies. The bidding was pretty straightforward. After some timid bidding, Price tried 7-10, Ostrovich brought it to 6-20, and after Nassif made his first bid of the day at 6-19, Pikula brought it down to 6-13. Only Thoren, Walamies and Davis dared step in, with Davis taking it to 6-10. Pikula took a moment, and emerged with a massive 6-9. Thoren got out. Walamies was more bold, coming back with 5-20. It was his. He accepted it, saying "I think I just messed up."

Brian Davis chose to try the "C" deck, a bizarre collection of Cephalids and one-of's. He started it with a bang: 6-15. Kibler went to 6-14, and then everyone got out. Said Dave Price "I don't understand this deck." Davis rebid at 6-13, and Kibler happily sat down.

Kibler called for the "V" deck. This one had a lot of the Invtationalists thinking. It's Gerrard's Verdicts and Vindicates would be absurd against players at low card counts. If it could draw its mana, that is. Visara the Dreadful batting cleanup helped a lot, too. He tried it at 6-20. Pikula bowed out after Price bid 6-16, even though it wasn't his turn, but everyone else liked it. Nitter went down to 6-9. That got most of the players to drop, but Thoren came back with 5-20. Nitter said "I'm crushed", but still tried 5-19. Thoren went to 5-18, and that was that.

Next up was Itaru Ishida. He nominated the "B" deck: Battle of Wits. There wasn't a lot of excitement over this one. Finkel tried 7-16. Pikula went 7-15. Ishida went to 7-14, but Finkel was not to be denied. He wanted to play Battle of Wits in ALL the formats (after 0-3'ing with Battle in Online Extended), and took it for 7-13. 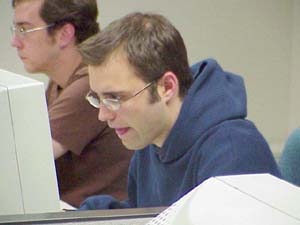 Unsurprisingly, The King of Beatdown offered up the mono-red "R" deck. He started with 7-20 and warned the others "Don't screw with me, or I will beat you down." They didn't heed him. Ostrovich took it immediately to 6-20, and then everyone tried to grab it. Nassif beat Ostrovich's 6-10 with a 6-9, and then it was just Price. Kibler called him out "C'MON DAVE! DON'T DISAPPOINT THE KIDS!", but he couldn't bring himself to do it. Nassif scored it with 6-9, and he and Diego went into Price's Bad Books.

Next up was the "P" deck from Ostrovich, mono-blue but for four swamps to help out Probe, and packed with wizards. There was lots of competition, but when Ostrovich took it from 7-11 to 6-20, everyone got out of his way.

Just six players remained, and they were running out of good decks. Pikula nominated "Z", the zombie beatdown deck. Nitter and Price got out early, with Ishida benching himself after Kibler's 7-10. Pikula and Romao tried to fight, but Romao wanted it badly, jumping by three life points at every bid. He scored it for 6-13.

Next was U from Eivind Nitter, the Upheaval-Urborg Drake deck. Kibler and Pikula bid him down, but didn't really want it. He took it at 7-13.

Kibler asked for the "A" deck, based around Alter . Everyone tried for it at seven cards, with Price taking the low bid of 7-10, but then Kibler came overtop with 6-20. He was happy to get it, since it at least had a fair bit of beatdown in it.

Just Ishida, Price and Pikula remained. Ishida asked for the "S" deck, a combo deck built around Squirrel Nest, Symbiotic Deployment and Solitary Confinement. Price sat down immediately ("Not enough beats, thank you" - Dave Price), and Ishida and Pikula duked it out. Pikula won it at 7-13.

The three remaining decks were "J", "D" and "W", pretty much the worst of the bunch. Price asked for the "J" deck at 7-20, since it at least had Jade Leeches and Jeskas to maul the opponent. Ishida didn't argue. He was happy to take the "D" deck, the terrible reanimator deck. Price was surprised. He was perfectly willing to let Ishida have "J" for 7-19 and take "W" at 7-20. His reason? "Words of War is pretty good against opponents at nine life."