Looking over the pairings, it became immediately apparent that my work was going to be cut out for me this weekend – the field was full of the Sharpest Blades of Australian Magic Society. I closed my eyes and stabbed at the sheet of paper with ol' index'y.

Glanville got his tournament started in the worst way possible, with a mulligan to four. Cheung mulliganed to six, and eying up Glanville's lone Island in play, chose to summon an Overgrown Battlement instead of casting a Rampant Growth.

"Can't Spell Pierce this," he mused with a smile, which was quickly shrouded with confusion, "wait, he's still tapping his land..."

Glanville placed a Twisted Image on the table, and motioned towards the Battlement.

With the wind taken out of Cheung's sails, both players settled into playing lands and passing their turns. Cheung made the first move, tapping out for a Primeval Titan, which resolved. Cheung followed up with a Mountain, tagging Glanville in the face. 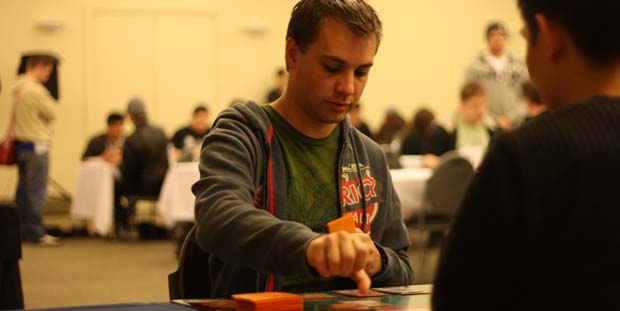 "End of turn," Glanville announced calmly, placing a Deceiver Exarch on the table. Cheung nodded. "Tap your Mountain." Cheung let the Exarch tap his land, and quickly scooped up his cards as Glanville flashed him a Splinter Twin.

Game 2 started considerably better for both players, but ended in much the same fashion. Cheung once again assembled his game plan, but had nothing to stop Glanville carrying out his.

Throughout the weekend, I'm always fielding unsolicited advice on which matches I should feature each round.

"You should totally feature match my teammate, he's playing some really cool Red/Green deck built around Valakut, and Primeval Titan. It's really good."

"My cousin is playing in his first big event; can he get a feature match?"

"This is his last nationals here, before he gets married and moves to the United States."

Not a bad excuse – gotta see the guy off, after all.

"You should feature match my teammate Dylan Brown," 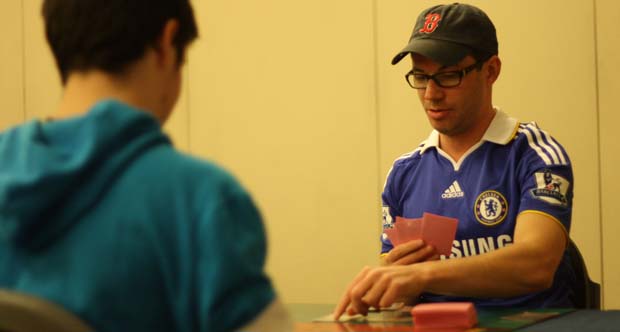 Evans brought an established game plan to the table, carefully ramping up his Red and Green mana whilst waiting for an opening. When Brown finally tapped out to cast Conqueror's Pledge, Evans took the opportunity to summon a Primeval Titan, setting up what promised to be a quick and traditional Valakut kill.

If Brown seems unconcerned about this, it was because he was, well... unconcerned. He tapped out again on the following turn to cast Mass Polymorph. As he started flipped cards off the top of his library, it became clear to Evans what was going to happen. 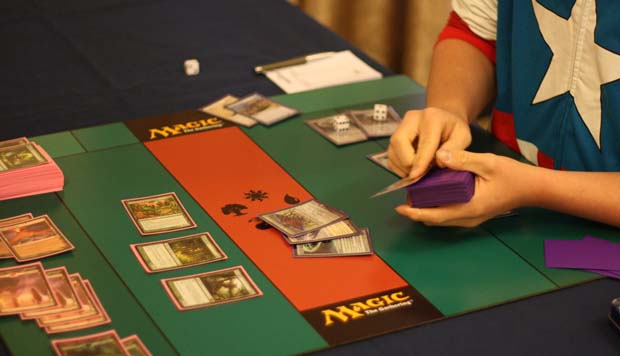 Emrakul, the Aeons Torn was joined by Iona, Shield of Emeria, and Stormtide Leviathan. After a quick inventory on his options, Evans packed it in.

Game 2, Evans had a better plan up his sleeve – sideboarding in Pyroclasm to sweep away any tokens before they became oh so much more of a problem. Evans developed his mana with an Oracle of Mul Daya, while Brown summoned Elspeth Tirel. Elspeth being a popular gal, she's often seen with a doe-eyed band of soldiers following her about the place, and this game was no exception.

Evans furrowed his brow at the Pyroclasm is his hand. Elspeth was on two loyalty – an easy task for the Oracle, if not for the Soldiers in the way. The Pyroclasm could take out the Soldiers, but the Oracle would not survive long enough to finish off Elspeth. If Elspeth survived the turn, the Pyroclasm would only deal with the Soldiers in play, and Elspeth would be free to make more during Brown's turn, which could be disastrous. Evans finally settled on sending in the Oracle. One Soldier gallantly blocked, leaving both Elspeth and the Oracle alive. 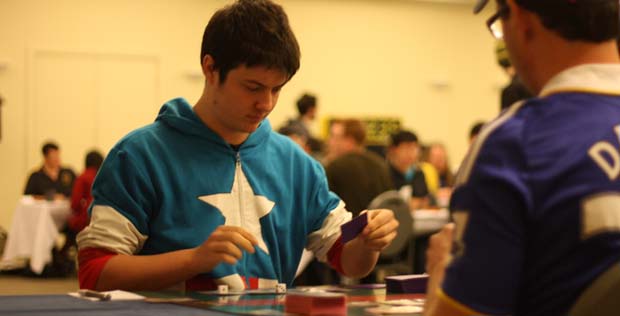 "I guess I just have to play like you don't have the Mass Polymorph," Evans shrugged, summoning a Primeval Titan. "You do have it though, you're not unhappy about the Titan," he admitted.

As expected, more Soldiers flocked to where Elspeth had just been ("did you see her? I could have sworn she'd be here, I was totally hoping to get her autograph!" one Soldier gushed) and Brown once again cast Mass Polymorph. The three giants from last game were joined by the Terastodon that had been languishing in Brown's hand in Game 1.

Last night, Dylan Brown won a Last Chance Qualifier with a Mono Red Goblin deck featuring Pyretic Ritual. I was a tad surprised then, when I learned that he was playing a different deck today in the main event.

"We didn't want to show everyone what we'd been working on," he admitted, "I decided I wanted to grind in with something simple and Red."

Dylan's deck today is about as much of a departure from the deck he played last night as you could get. "Mackenzie Stratford and Benjamin Encel built this deck originally just after Mirrodin Besieged came out, but once everyone was playing CawBlade, it couldn't win, so we shelved it."

The deck works in a similar manner to the Polymorph decks that appeared in Standard just over a year ago. You find an alternative way of making creatures, and Polymorph your way into the only actual creature cards you have in the deck. Previously, these decks were Blue/Green, and would usually only manage to throw out one huge beater. With Mass Polymorph, you're free to just get in there and get as greedy as you like. With Conqueror's Pledge and Elspeth Tirel making more than one creature token at a time, Mass Polymorph can easily plop three or four massive monsters into play.

Traditionally, you might be able to race a Polymorph deck to the finish. Mass Polymorph does a good job of simply shutting down anything and everything you could conceivably think of, short reaching for your sideboard, of course.

"The banning of Jace, the Mind Sculptor, and Stoneforge Mystic really opened up the field for this deck," Brown explained. "And with Timely Reinforcements from New Phyrexia, we even finally had a good Mono Red matchup as well."

Going into the draft rounds, Brown was merely 2 – 1, but his inexperience at this competitive level could probably excuse that somewhat. "I lost a round to my friend Francis (Lam) and his Blue/Green Infect deck. I had no idea what I was supposed to do in that match." Lam also won a Grinder last night, and his list can be found in the Grinders lists we posted earlier today. 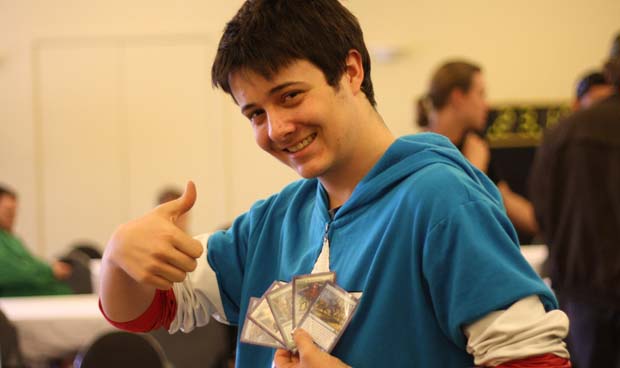 Dylan Brown is having a whale of a time at his first National Champs.

Dylan didn't fare so well in the draft rounds however, and he has since dropped to get stuck into the Public Events tomorrow.

4 Everflowing Chalice 4 Sphere of the Suns

4 Sphere of the Suns 4 See Beyond 4 Mana Leak

Aaron Nicoll has been very quietly tearing up small parts of the Australian Magic scene over the last few years. After a top 8 at Nationals in 2009, he went on to get a taste of the big time at Worlds in Rome. He's also competed at Pro Tour San Juan, and made day two at Pro Tour Nagoya.

Aaron headed into the draft portion of this event at 3-0. He first picked a Merfolk Looter over a Solemn Simulacrum and an Aven Fleetwing, and followed it with a Gravedigger over a Mana Leak. His third pick was devoid of anything playable in Blue or Black, but did have an Angelic Destiny and an Assault Griffin. Taking the Angelic Destiny, he headed into White. Unfortunately, the leftover Assault Griffin also put Jack Ding downwind of Aaron into White as well. Feeding Aaron was Luke Mulcahy, who was solidly in Red/Green.

Pack two gave Aaron a Gideon's Lawkeeper, and sent a Volcanic Dragon up to Luke. Jack took a Pacifism over an Incinerate, indicating that White could be a little tight in this direction. Aaron still managed to pick up a few solid team-player cards, like an Assault Griffin of his own, and another Aven Fleetwing. Meanwhile, Jack solidified himself in Red/White with a third-pick Fireball. 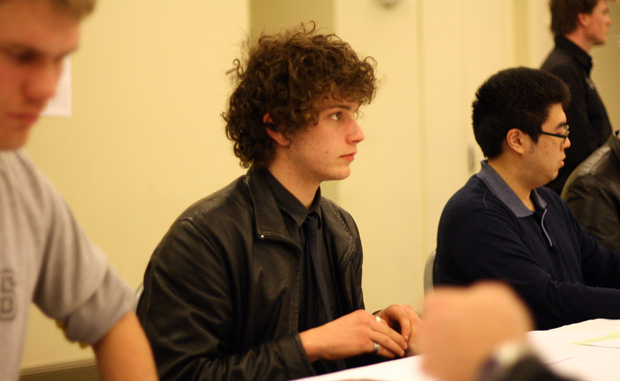 Aaron Nicoll between Luke Mulcahy on the left, and Jack Ding on the right.

Going into pack three, Aaron's deck wanted a little more substance, and he wasn't disappointed. Well, he wouldn't have been disappointed if he had been allowed to keep the whole pack, anyway. On the grounds he wasn't allowed to keep the whole pack, he eventually elected to send an Archon of Justice and a Pacifism to Jack, and kept a Mind Control for himself. Luke then passed Aaron an Oblivion Ring.

His third pick in the final pack was interesting, taking a Timely Reinforcements over a second Merfolk Looter. I asked Aaron about this afterwards. "I would do it again, every time," he stated. "This format is fast enough that if you're even a little bit behind, this puts you way ahead."

Both Aaron and Luke won their first two draft round matches, and met in round six. Aaron managed to take control of the match (as well as a few of Luke's creatures) with his Mind Control. In game two, taking the Volcanic Dragon he passed to Luke, and protecting it from back to back Stingerfling Spiders with a Cancel and a sideboarded Flashfreeze. 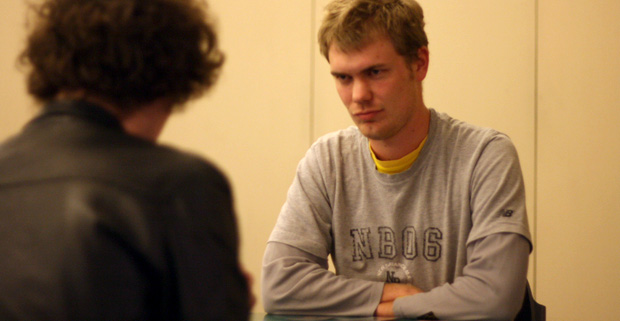