Earlier this year, the Sydney Magic community lost one of its most beloved and long standing players, the Mighty Allan Sharpe.

Allan was known for both his love of the Red cards, and his willingness to help new players. It's been said that if there was a Magic tournament held in Sydney, Allan would be there. However, it was travelling further afield that proved difficult for him. Allan was plagued with a degenerative respiratory disease, and ended up dependent on a portable oxygen machine to help him breathe.

Despite being unable to be a part of the Sydney Magic Community's biannual road trips to Canberra for the National Championships and CanCon, Allan competed at Regionals every year without fail, because hey, it was a tournament and it was in Sydney! Why wouldn't he?

Inspired by his determination, several members of Sydney's Magic community managed to convince Allan, oxygen machine in tow, to make the trips to Nationals in 2009. He may not have made it through the Last Chance Qualifiers, but everyone there agreed Allan had a great time playing in the Public Events that weekend.

Unfortunately, as Allan's health continued to decline over the last few years, his tournament attendance also lessened. That didn't dull Allan's love of gaming or Magic, though. When Allan could no longer make it out to the games, the world of online gaming (including Magic: Online!) brought the games to him.

While Magic in Australia will miss the Mighty Allan Sharpe, it will forever be better because of him.

Round 9: Draft Tech with Wilfy Horig

Melbourne's Wilfy Horig was the last undefeated player at the end of day one. For a few years now, Wilfy's name has been echoing through the grapevine as a young player to look out for.

"I've done infinite M12 drafts," the 16 year old stated with a shrug. "I never really did very many M11 drafts – just Nationals last year, and that was it. I didn't really like the format all that much, so I didn't draft it on Magic: Online at all." 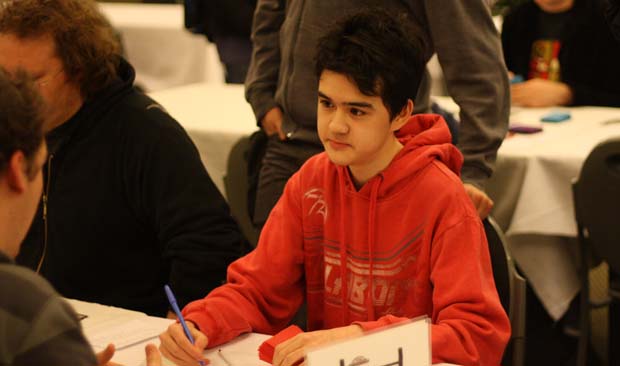 Wilfy Horig is out in front this weekend.

I asked if the format felt very different to M11, despite his lack of experience with last year's set. "This Is way faster, definitely. Like, Zendikar fast. I also don't like Green in M12. Their best 2-drop is a 3/2, so it just trades with everyone else's 2-drops, and the rest of their cards are 5 mana 4/4's. The other colors have real cards. I don't think I've even played a Forest in this format yet, and I'm happy about that."

What color combination do you prefer to draft in Magic 2012?

Coming out of the draft rounds, both Aaron Nicoll and Wilfy Horig were sitting on top of the standings each with 5-1 in draft, and 3-0 in constructed. Horig's Vampire deck stumbled in Game 1, missing a pair of land drops before drawing into lands than entered the battlefield tapped. This gave Nicoll's three-color Splinter Twin deck room to set up the kill, by using Birthing Pod to fetch out Deceiver Exarch, and then Urabrask the Hidden, letting the Splinter'd Exarch copies attack immediately.

Game 2 was even worse for Horig, as Nicoll had an early Pyroclasm, and then a pair of Solemn Simulacrum's to continue slowing him down. Nicoll mopped up the mess with a Frost Titan.

You may not have heard of Dan Unwin, but his decks have been putting up results for Australians for some time now. Jeremy Neeman took 15th at Pro Tour Paris, and Top 8 at Pro Tour San Juan with Unwin's decks. John-Paul Kelly finished 10th at Pro Tour Austin with one as well. Oh, and every deck the Australian team used to reach second place at the World Champs last year? All designed by Unwin.

This weekend, Unwin brought a Red/Blue/Green (RUG) Splinter Twin/Birthing Pod deck to the table, which had a combined record of 12-3 after the first three rounds of standard. "11-1 if we pretend John-Paul Kelly wasn't playing it," he joked.

Unwin acknowledged that RUG Twin is clearly not his idea to begin with. "It's been on Magic: Online for a while, but obviously not with M12, and it seems like none of them are running all four Splinter Twin," he explained. "I also didn't like that they were running things like Lotus Cobra and Nest Invader. I think Pyroclasm is one of the better cards in the format, and being weak to it seems like a bad idea." Instead, Unwin has chosen to run the full complement of Overgrown Battlements alongside his Birds of Paradise. "It also lets us drop down to 24 lands, and run Pyroclasm in the board ourselves." 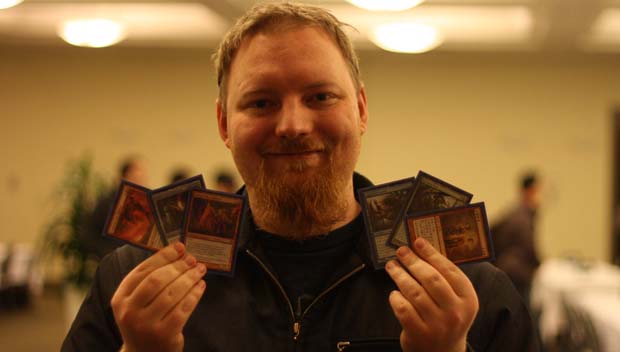 Dan Unwin has plans. Lots of them

Something that they've left out is the Fauna Shaman/Vengevine package. "It takes up a lot of room, and removing it gives us a more consistent deck," Unwin explained, as he fanned out the cards he could now fit. "Preordain and Ponder to help smooth out our draws, and the fourth Splinter Twin, because it's still really good on most of the other creatures we can search up as well. Sometimes the Exarch-Twin game plan isn't the best plan to go for, and both Ponder and Preordain help you set up what's going to work for you in that game."

So what were the most exciting things about M12 as far as this deck goes? "Ponder and Solemn Simulacrum, as well as Phantasmal Image. They really change the deck for the better."

I don't want to imagine what a competitive Magic tournament would be like without judges present, do you? Thankfully, nobody has to worry about this here this weekend, as we have a trusty team of tournament officials to make sure things run as smoothly as possible.

In the Mass Polymorph Deck Tech with Dylan Brown, I mentioned that he had won a Grinder on Friday with a Goblin deck that featured Pyretic Ritual, which prompted this tweet:

So this morning, I found Dylan and asked him. "Haha, it's his deck!" Dylan smiled, pointing to the pony-tailed gent he'd been conversing with, "ask him."

Matthew Anderson was sitting at 6-1 at the end of day one, and was more than happy to talk about Pyretic Ritual. "It's amazing. There's nothing better than turn one Goblin Guide, turn two Ritual, Goblin Guide, and a kicked Goblin Bushwhacker. You're on 10!" he cackled. I got the feeling more than one player had been defeated in this manner already this weekend, however unlikely that sequence of events seemed. "Turn three Hero of Oxid Ridge is great too, sending the team past any Spellskites or Overgrown Battlements." 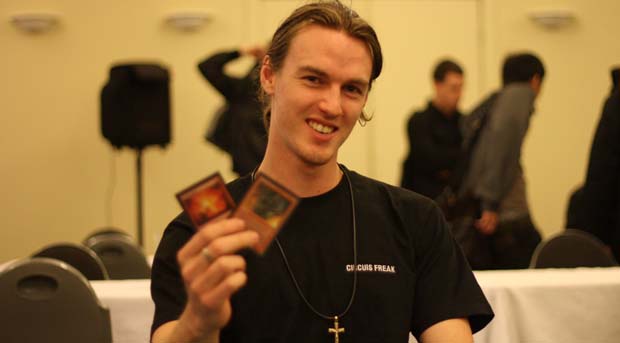 Matt Anderson is looking like a very solid lock for the top 8 going into the last round.

"I've paid for Mana Leak with Pyretic Ritual, and it's also great with Shrine of Burning Rage. I even managed to activate a Shrine with only two lands untapped when someone tried to kill it, it's awesome."