You can call him Billy Jensen, you can call him "Baby Huey," you can even call him William Jensen III, but one thing he's being called a lot this weekend is "probably the best player in the room." The 18-year old high school senior has two Grand Prix wins, a Masters Series win, and a Pro Tour Top 8 on his resume and he's only been playing on Tour for about 2 years. He's also defending the honor of his home town this weekend - Huey proudly wears a TJ's Collectibles shirt to all major events and TJ's owner Tom Shea is the tournament organizer this weekend. 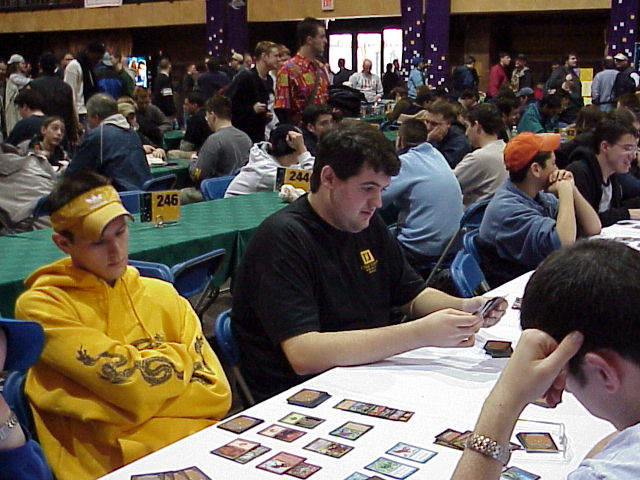 When I caught up with him, Huey was killing time during his three byes by teaming up with 1998 US National champion Matt Linde for a draft against Chris Benafel and Dustin Stern. It was the fist pick of pack #2 and he had to decide between Rith and Exclude for his blue/white/green deck. He went with Exclude. He later explained to me that he really likes drafting blue/white now that Planeshift is out. "Lashknife Barrier is probably my favorite card right now. I absolutely love that card." His impressions of Planeshift in general were similarly favorable.

Huey built a red/black/green deck for Saturday's main event. With half a dozen assorted removal spells and a solid creature base, Huey (like a lot of people this weekend) felt red/black was obvious. He then found himself debating between blue and green as his splash color. Blue had one "bear" (2/2 for 2-mana) in the form of Vodalian Zombie while green had two (Nomadic Elf and Yavimaya Barbarian). Blue did offer Stormscape Battlemage (and it's "Dark Banishing" kicker) along with Confound, but green had Fires of Yavimaya along with several other single-green creatures that were easier to play than Faerie Squadron and Sapphire Leech. Mostly, Billy explained, "I really like 2/2's for 2" and so he went with the green. The last few tweaks and decisions can make the difference between a good sealed deck and a bad one. Huey spent the end of his deck construction time decided whether to play Maniacal Rage, Recover, and/or an 18th land. Even with 2 Familiars in his deck, (Thunderscape and Nightscape), he felt he still needed 18 lands because he really wants to make sure he gets his colors. He also felt Maniacal Rage would be really good with his two Volcano Imps (4/4 first striking fliers are good) so Recover wound up in the board. So did Amphibious Kavu - it's a good card, but with only 5 Forests in his deck, Huey didn't think it was worth running.

All in all, Huey's analysis was typically humble and understated - "I think I'll do all right, [shrug], It's not great, but, you know."