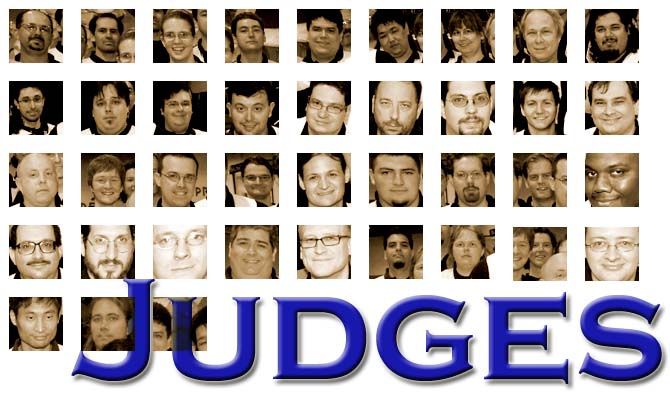 Get all the latest regarding DCI and judging straight from the source at Pro Tour San Diego.

Looking for the latest stories or Day 2 stories?

Welcome to the other side of the curtain! 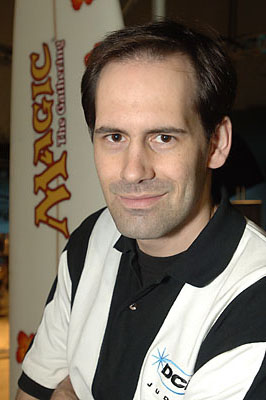 Just like that proverbial wizard in the emerald city, the judge program works hard to provide for you, our players… but the inner workings are shrouded in mystery. There's no good reason for it really; many players have just developed a long-distance relationship with their striped counterparts. This weekend, we're going to take a trip behind the curtain (both physically and metaphorically), and show you why judging a Pro Tour (and judging in general) is the best gig in town.

Speaking of "we," I'll be your tour guide for the next few days. By way of introduction, my name is Gavin Duggan and I'm a Level 3 judge from Calgary, Canada eh. I'm also a Wizards representative for the Magic rules, which means I'm a hardcore Melvin (wonderfully handy term, that). I'll admit this much straight up: I'm a much better judge than I am a player. Judging requires a different set of skills, and I enjoy playing the game too much to really dedicate myself to winning (Playtest the same deck for 100 matches? Thanks, no)… but that fact notwithstanding, I do play in at least three or four Regionals / PTQ-level events each year to stay familiar with the player experience.

So… on to Pro Tour-San Diego!

Just like the players, top judges from all over the world… no less than 65 of them… have descended en masse on sunny San Diego for the PT this weekend. From an administration perspective, the Two-Headed Giant format is a little … "unruly," let's say… so with that in mind Wizards has provided an exceptionally large and experienced crew to help things go smoothly. 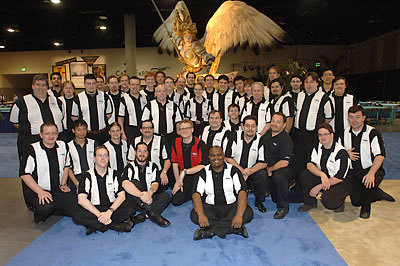 The upshot is that a lot of interesting things have already happened this weekend from a judging perspective, and it's only going to get more intense. Hopefully, we'll get some crazy stories from judges about their travel adventures en route to the venue, wacky after-hours drafts, the Elder Dragon Highlander league, fancy dinners, 2HG rules oddities, and a look at why the heck people travel thousands of kilometers to put on the stripes (Hint: it's all about the people!). I say hopefully because Pro Tours are high-pressure, high-energy, high-tempo events… even with a staff of 65 we can never be sure how it's going to shake out. Instead, I'll just let you know what happens, as it happens, from our perspective on stage.

We'll also get a chance to talk with a Level 5 judge (that's as high as it goes; they're the ones who run the program, with an iron fist gentle hand!) who has a unique perspective on what makes the program tick.

Now, if you'll excuse me… I have to go help herd nearly 400 cats into our first draft.\

To understand how this could happen, we have to look at how the DCI handles penalties in Two-Headed Giant tournaments. Because 2HG matches are only one game, a major issue arose surrounding the use of Game Loss penalties and their functional equivalence to Match Loss penalties. If the appropriate penalty for an infraction is one game, then it's inappropriate to assess a Match Loss for the same infraction (if a better option is available).

One of the big differences between 2HG tournaments and single player formats is the use of the "Match Point" Penalty. The use of these penalties is strictly regulated… but for some infractions in a 2HG match, a Game Loss is replaced with a one-point deduction in the standings. This deduction is applied whether the receiving team wins or loses the current match… so for the first time it's possible for a team's standings points to go down during a match. Even if the receiving team wins, they'll still only net two points in the standings… but it's certainly less severe than a match loss (guaranteed zero points). Whether it's more or less severe than a game loss is a matter of opinion.

The relevance was immediately obvious today when a team was effectively eliminated from day 2 after two rounds of play. Their 0-2 record, in conjunction with a match point penalty for an illegal decklist, leaves them with -1 points… mathematically eliminated.

Most of the excitement of a Pro Tour happens at the venue itself, but for a "lucky" few the adventures start even earlier… before they arrive. In San Diego this weekend, we have judges from as far away as England, Australia, Spain, Korea, Japan, Finland, Mexico and Argentina (among others). With this many people traveling that far, some mishaps are inevitable… but this weekend has been a bit fubar. A number of bad storms in the U.S. on Wednesday night resulted in a cascade of canceled and delayed flights. The end result is that we've lost a couple of staff members completely, stuck overseas for more than a day, and a few more aren't arriving till this evening. 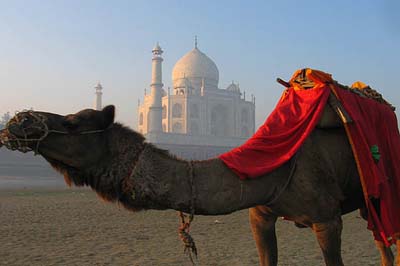 Fortunately, nobody had to get too creative.

Nicholas Glick, a friend of mine from Spain, spent twelve hours getting here… three of them being delays in his flight out of Philly. Fortunately, the trans-Atlantic span was spent chatting up two girls in the seats next to him; the DCI takes such good care of us.

Perhaps the most unusual encounter, though, was Aaron Hammer's run-in with a cargo train doing the cha-cha:

"I was weird… we stopped at the tracks as a train started to cross. 10 minutes later it stopped, halfway through its length: Rail cars in both directions, as far as we can see. Then it started to reverse slowly… then it stopped… forwards, backwards, forwards, backwards. It spent another twenty minutes just sashaying back and forth across the intersection before it finally continued backing up towards the horizon. The driver even waved to us… What the heck??"

A number of judges (myself included) have been doing a Montreal-San Diego double bill. The two might not seem close together, but as Juan del Compare points out, North American Grand Prix are really expensive for Latin American judges. Both players and judges save on the trip by doing a multi-leg journey. Juan and Adrian Estoup went one step further, coming through Buenos Aires to take part in a Nationals Qualifier. The last leg, into San Diego proper, was a bit dodgy like everyone else's… but the "always travel with a partner" tech came through, and they got here.

Me, I got off lucky. The delays out of Toronto (the penultimate leg of my five-city jaunt through GP-Montreal and couple of conferences) were just long enough for me to get through the lines, with a little help from the airline staff. I've never been one of the "arrive late, skip the huge queue" types, so I felt a bit guilty following the manager past all those people at customs. -3 Travel Karma.

One of the fun (if a little vicarious) things about judging is the opportunity to see truly spectacular, or spectacularly goofy, plays from a good vantage. Usually, judges watching a match aren't watching the play itself, but rather things like the players' hands, tapping of lands, pace of play, etc. When something interesting happens, though, the macro view of the game comes into view.

Floor judge Andrew Veen was watching two teams swing back and forth, with a Deathspore Thallid tipping the balance in Team A's favour. Team B suddenly got excited when they topdecked a Volcano Hellion and proceeded to deploy it in the Thallid's direction. Things looked pretty steep… but Team A flashed in Temporal Isolation with the trigger on the stack! Saved!

The Hellion's owner threw up his hands in mock disgust and declared that he'd do a thousand damage, because it doesn't matter.

…That's when Andrew stepped in to point out that Hellion's damage can't be prevented.

At larger events, the side events schedule ramps up slowly; there just aren't many players available to play. The qualified players (teams, in this case) are still playing in the main event, including those blessed few who won the PTQ at oh-dark-hundred. Of the non-qualified players who will later fill up sides, most are sleeping off either frustration (at a late loss) or travel. The side event judge crew, however, is raring to go, and most of them showed up early to attend the main event-briefing.

Net result: A passel of bored judges, all waiting around to collectively pounce on each and every rules call… or any player who looks like they might have a question.

Normally, this phase passes quickly as teams are eliminated from the main event. Today seems to be an exception, so the judges have paired off for mentoring interviews.

[The number of guaranteed drafts in the main event seems to be keeping a lot of players from dropping (at least until Round 7). As of 6 p.m., things are only just starting to pick up. The bad news is that the main event is on pace for a 10 p.m. finish. -Gavin] 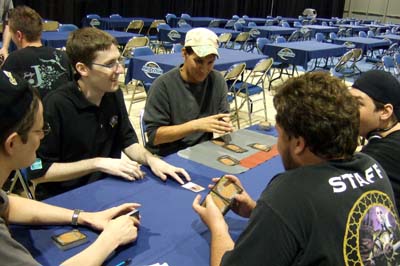 "You should put that on there."
"Okay. Now get in there with that."
"Oh yeah, that's good… but first you should totally tap that."

… turns out, you can REALLY misinterpret 2HG team chat, taken out of context.

Head judge Toby Elliott has made teambuilding one of his primary goals for the weekend, and he kicked it off with a private judge draft Thursday night. Ostensibly, the point was a little last-minute familiarization with the format, but really it was just a chance to sit down with old and new friends for a few hours and smash face. The pairings were engineered for maximum fun, and with the exception of a few sugar-induced draft violations by yours truly, and the fact that every team drafted at least 4 copies of Snapback, it went off without a hitch. 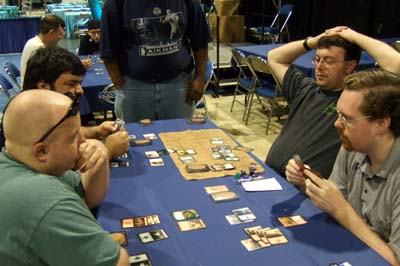 Unlike nearly every other match in our tournament, this table featured double-digit pro points. Yikes.

It goes without saying that most judges aren't pro-caliber players, but a few of the participants sport a PT history from the floor; unbeknownst to him, there was a small conspiracy to make sure Duncan McGregor's team went down in flames.

One really good thing about the practice draft was the revelation many of us had about the timing. 40 seconds just isn't very long… at all. True, it would have been easier with proper card valuations done ahead of time, but most of us were struggling to think things through in time. 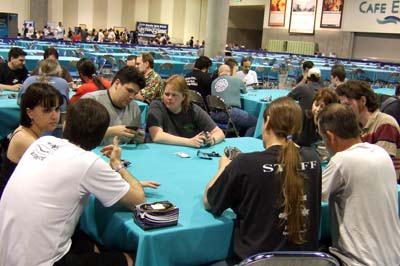 What judging the PT is all about: new and old friends, from far away.

An hour and a half of laughing and stumbling along later, we had our decks built and the judge battle ensued. The 2-0 teams were Adam Shaw and Johanna Virtanen, Will Colley and Eric Shukan, and Tony Mayer with … sigh… Duncan McGregor. Diane Colley and I went 1-1 with green-white and black-red, running the heavy sliver gambit, but we blame our loss on (*Rolls a die*) … mana flood.

After the last round finishes tonight, we're all off to play Elder Dragon Highlander… I'll have my revenge.