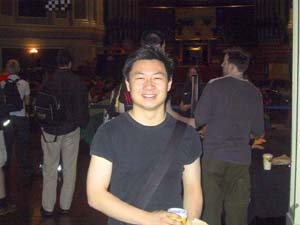 The ever smiling Sydneysider, fresh from his triumph in Cape Town has backed up for a second GP in two weeks. Now the top ranked APAC player in the format, Ben is one of the players that we expect to see later in Day 2.

Ben's predisposition towards U\W wasn't really a contributing factor in his choice of colors, as he pointed out that his red and back card pool was nothing short of horrible, with only 5 creatures between them. His green, as often is the case in Odyssey sealed defined the backbone of his creature base, with Krosan Archers, Nantuko Disciple and Mystic Enforcer. White gave him, among other things, 2 Aven Flocks a Mystic Visionary and a Beloved Chaplin.

As much as he wanted to, he didn't really trust his deck with just 2 colors, it lacked tricks and wasn't strong enough for a beat down win, from here he added some great blue - 2 Aether Bursts, Repel, Syncopate, and the ever amazing Cephalid Looter.

Ben said he had played with much stronger decks before but there was still room for a good result. The closest thing he had to a bomb was the Mystic Enforcer, (no Wild Mongrels or Beast Attacks) but as ever, is always confident of doing well.