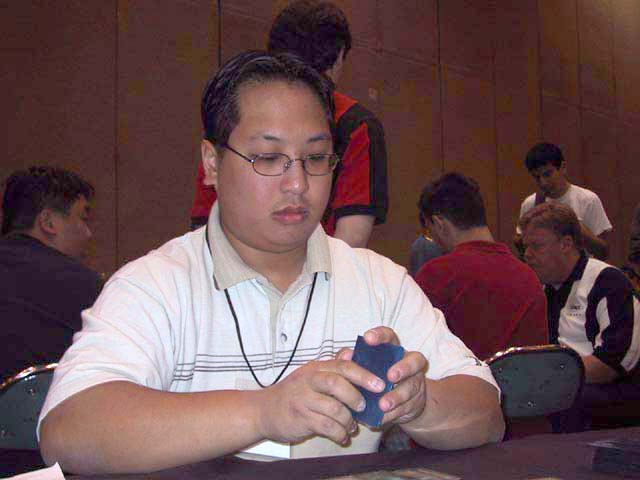 "If there was a random scrub who made Top 8, I guess that would be me." This is how Benny Wong described his performance this weekend. Wong is 24 years old and lives in Burnaby, B.C., where he works as a Chipper Man in a Lumber Mill. He had a great showing in the draft portion of the event, going 5-1. He attributed this to drafting the colors that people to his right weren't drafting. This "good neighbor" strategy is especially beneficial in Rochester Draft, where the cards drafted are out in the open. A player who helps out the drafter next to him is likely to be helped out in return when packs come around the other way.

When I interviewed Wong, he was awaiting his match against Gary Wise. He told me, "Gary has some pretty good tech, so I'm not sure if I can pull it off." He was referring to Unnatural Selection in Wise's sideboard, which allows him to nullify opposing Rebel Informers, along with various other tricks. The idea of playing on the Canadian National team hasn't exactly inspired Wong. "Worlds being in Canada doesn't matter . . . I'm from B.C., so Mexico is closer than Toronto for me." I wondered if even a little national pride was involved, and asked Benny if Worlds would feel any different if it was taking place in a place such as Australia. He assured me that it didn't make a difference to him.

As far as past experience goes, this is Benny's first major tournament accomplishment. He has been playing since The Dark, but quit after Urza's Saga. Wong was invited to Nationals on rating, so he started to play more. His Pro Tour experience has been minimal, as he has only competed in three Qualifiers. Benny told me he intended to play in more, and explained, "I keep getting 10th and 11th, which kind of sucks." Judging by his performance today, Benny certainly has the talent to bring his game to the next level.