I polled quite a number of Magic players about their favorite draft format in Magic history. Here's what they had to say.

Jon Becker: Saga Block, because I could always draft the same deck every time, and the cards were just consistent.

Brian Davis: Invasion block, because I loved 5 color green. I drafted it every time.

Antonino DeRosa: Tempest Block, because I love beatdown, and all the decks in that format were fast.

Rob Dougherty:Odyssey block, because of Magic Online. I can draft all the time, and it's given me an amazing amount of practice.

Jeff Fung: Tempest block, because I made $10,000 and drew my Helm every time.

William "Baby Huey" Jensen: Urza Saga block, because I liked playing 5 color green. Me and Mike Bregoli started playing that before it became popular in Invasion block and we got laughed at—until we both made Top 8 at a Pro Tour with our strategy.

Eric Kesselman: Invasion, because you could draft literally any color combination, and they were all viable. There was just so much versatility and so much power. 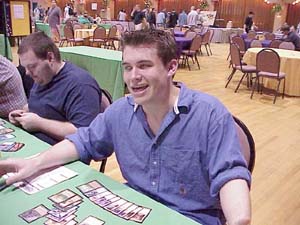 Brian KiblerBrian Kibler: Invasion only. I loved attacking with Nomadic Elf, and Yavimaya Barbarian, and Llanowar Knight, and every other green 2/2 creature I could draft.

Sean McKeown: Saga block. I had a really cool blue deck I liked to draft, and I could draft it every time.

Dan OMS: Saga block, because I knew every card in the format and could keep track of them in drafts. I won a lot of matches because of that.

Steve OMS: Tempest only. Everyone was so horrible back then, so I won all the time.

Alex Shvartsman: Saga block, for sure. It was fun, balanced, and fairly powerful. I absolutely hated Tempest block. 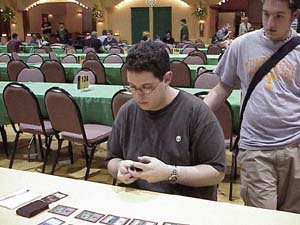 Mike Turian: Straight Tempest. I could draft lots of Rootwallas.