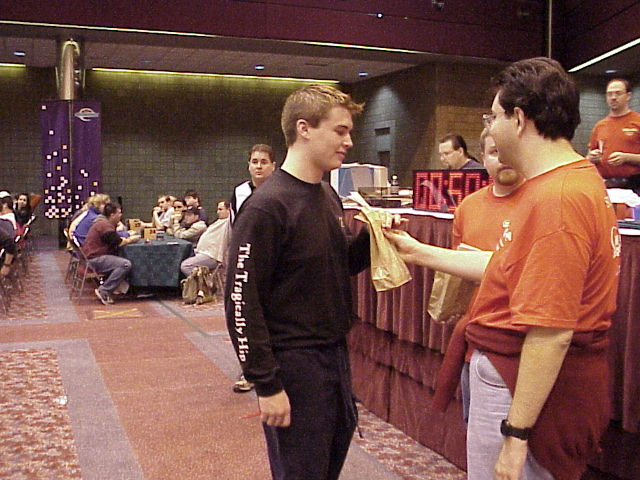 When registering his deck, Brian Kibler wasn't sure he would want it back. He saw a few really powerful white cards (Samite Archer and Armored Guardian), but the deck did not appear to have enough depth in white to support those bombs. Kibler did in fact get his deck back and upon further review there really weren't enough good white cards to play white. However, the deck was quite easy to build.

Kibler's normal plan in Invasion sealed deck is to play black/blue/white. The thing he looks for the most is a good, aggressive creature set. He likes to have a solid mana curve of creatures with some early beatdown and some evasion and he's certainly willing to also look at red if it gives him that. "People really underestimate cards like Kavu Aggressor and Shivan Zombie."

Kibler commented that he likes green a lot in draft, because he thinks it's underdrafted. However, in sealed deck he tends not to play with Forests because "Too many of green's commons are mana fixers instead of good cards."

Removal is also important to him and this deck had plenty. Red and black gave him a solid base of removal plus a good creature curve. Kibler seemed very happy to have 4 2-drops, 4 3-drops and a sprinkling of more expensive creatures. His rares included Blind Seer, Skizzik, and his "favorite card in the format" - Phyrexian Infiltrator. Kibler wound up with a solid black/red/blue deck that he seems confident will carry him through to day 2.