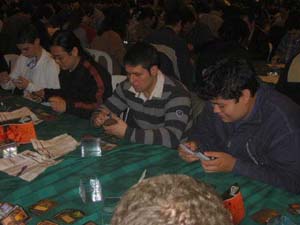 Sorting out the bombs from the cheerleaders.We all know the guy won Worlds playing Psychatog. He played in both Constructed formats and in the Top 8. He breezed through those parts of the tournament. But... he compiled a somewhat very less impressive 3-3 in the Limited portion. That would seem to label him as a Constructed specialist.

On the other hand he took Grand Prix Rio (a Limited tournament) a couple of years ago. No matter what people say about the level of Magic outside the US-Europe circuit you don't just "luck" your way to a Grand Prix win.

To shed some light into this question who found out way through four hundred tables to bring you Carlos's Sealed Deck. First, obviously, here is the card pool:

Now take your time and sort through everything before seeing what the "Champ" picked. Done? Let's go, then.

According to Carlos Green, Black and Red looked like the perfect choice. He had a very hard time figuring out how to work all three of those colors in but finally decided to reduce Red to a mere splash for Skirk Marauder.

1 Patron of the Wild

A final comment? "I'm still not sure about some of the Red cards I left out, but I think the deck is pretty good". The final five rounds of the day will determine if he made the right choices, but you can start second guessing him right now :)