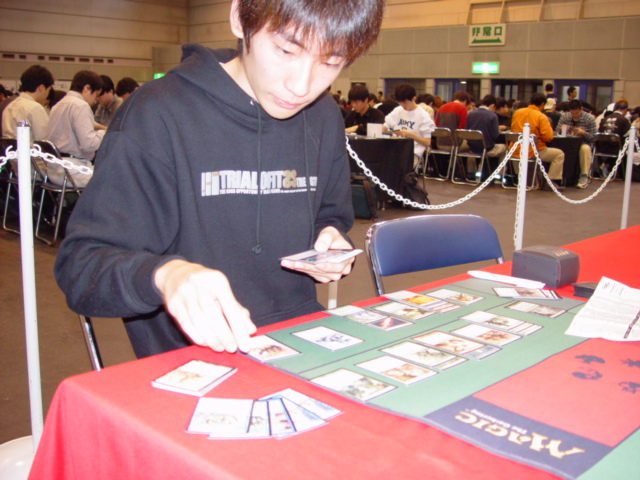 While riding out that wave he earned Rookie of the Year honors and had such a dominant year that he was in the running for Pro Player of the Year right up until the finish line. Along the way he stepped up alongside other Japanese Magic luminaries such as Jin Okamoto, Tsuyoshi Fujita and Itaru Ishida. He is widely believed to be among the very best Japanese players and is certainly one or two Pro Tours away from simply being recognized as one of the best players period.

Despite his success, Oiso has remained excited and joyful about the game. As I fanned through his sealed deck prior to the time that he could view the contents, he could barely contain himself. He was on the edge of his seat with every raised eyebrow and nod of approval. When it was finally time for him to look at his cards he was like a child on Christmas morning making a beeline for the tree.

We all know that Oiso has been a very good boy this year and he was not disappointed with the presents that awaited him. As he pawed through his deck he sent a cascade of cards into his playable pile. A pair of Shatters earned an excited thumbs up. They earned an intake of breath when he found an Isochron Scepter to imprint one upon.

That was far from the end of his combos. A shiny, foil Solemn Simulacrum and a run of the mill Duplicant were placed in their own special spot along with a Skeleton Shard. "Every time my rare is foil, my deck is awesome." Other than those two broken creatures, the first creatures Oiso set aside were three Myr--two Iron Myr and one Copper.

Oiso began to lay out his other creatures which included Tel-Jilad Archers and Fangren Hunter--green was definitely going to be a base color. His equipment included a Bonesplitter, Vulshok Gauntlets and Mask of Memory. He looked through his red creatures and found nothing especially exciting there--only a Vulshok Berserker and Ogre Leadfoot. Oiso quickly turned to his other colors and his eyes widened when he scrolled through his blue.

A pair of Somber Hoverguards, Neurok Spy, Wizard Replica all seemed likely candidates to pick up either the Bonesplitter or the Mask of Memory. Blue also offered Domineer, Annul and a Seat of the Synod. Oiso immediately committed to Blue-Green base splashing red for the Shatters and a Goblin Replica.

Oiso's technique for deck building was intriguing. He sat down with forty sleeves and whenever he was positive that a card would be in his deck he sleeved it. The empty sleeves signified decisions that remained to be made. All of his removal went right into sleeves--a Deconstruct and Creeping Mold joined the pair of Shatters and an Annul--as did all of the evasion creatures and the aforementioned equipment. Jens Thoren and the Duplicant hit a pair of sleeves pretty quickly as well. 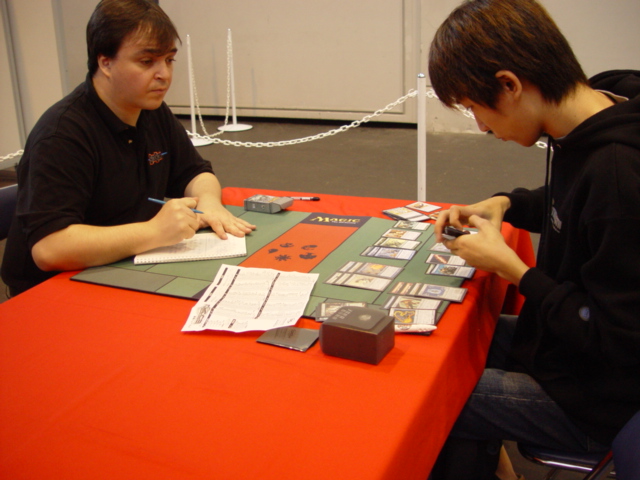 In short order the Rookie of the Year had twenty-three cards sleeved. He stared at a naked Trolls Tel-Jilad sitting on the sidelines. Oiso expanded his bench to include a second Vulshok Gauntlets, Alpha Myr, Clockwork Condor, Mindstorm Crown and Myr Prototype. He was vacillating between playing twenty-three and twenty-four spells and could not make up his mind.

"If I have two or more Myr I will generally play sixteen land. Everything here is very good for me. My Myrs are red, red and green. Since red is my splash it is a very good sign for me. My color problems are not serious this time and two red Myr is very good!"

Oiso looked though his sleeved cards and considered taking the Isochron Scepter out to make room for either the Condor or the Trolls--or both. "This card looks very strong but when I have played it...it has not been very good for me. It is a legendary card, when my opponent plays it, he always imprints a Shatter and it is insane. Whenever I play it--it is just an artifact." He smiled broadly and left the card sleeved, "I do have two Shatters though..."

One by one he eliminated cards from his maybe pile and he got down to a choice between the Trolls and the Condor. He held the Trolls up and sighed, "I have a mana heavy card here but the three Myr..." He let his thoughts trail off and with mana on his mind turned to settling his land decisions. He would come back to the Trolls/Condor debate later.

He laid out sleeves for a pair of Mountains, six Islands, and five Forests. He also had a Tree of Tales and a Seat of the Synod. He had one sleeve left for a sixteenth land but again he was torn. he wanted to play three Mountains but he had a number of double green spells--including Creeping Mold and Fangren Hunter--that he wanted to be able to cast at the appropriate times. Finally--perhaps thinking about his two Iron Myr and the Solemn Simulacrum--he decided on the seventh green source.

That left only one sleeve unaccounted for. Oiso had removed any non-creatures from contention for that last sleeve. Only the Trolls and the Condor remained. "Right now I only have thirteen creatures--including three Myr and Domineer. I want one more creature." He looked at the Trolls and clearly wanted it to make the deck, "When it comes into play this one is really good. When it comes into play..."

Oiso wanted another creature for early in his mana curve and tentatively reached for the Condor. He pulled his hand back with a giggle. Finally, he picked it up but it was unclear if he would be sleeving it or putting it in his sideboard. It went in a sleeve and the Trolls were regretfully put aside, "It is a very rare case for me to have this card and not play it if I am green but today it is the Condor."

With the deck building aside Oiso now had three rounds to agonize over whether or not he made the right decision. His deck looked very powerful but was light on creatures that did battle. He also had only three instants for his Isochron Scepter. Check back after round three and see how Oiso and his deck fare in his quest for continued Magic dominance.