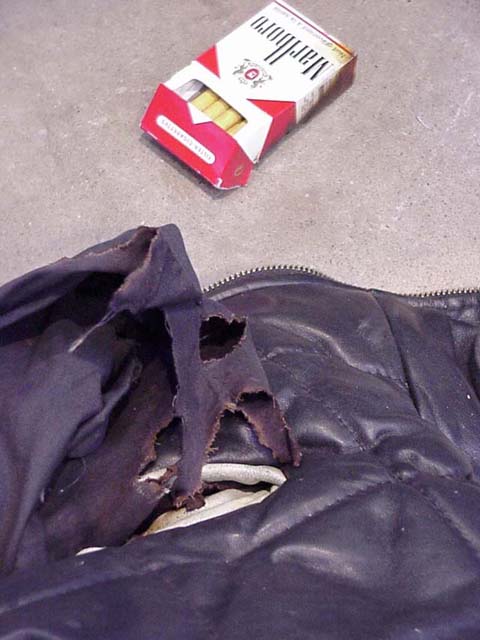 Another danger of smoking

During the first round of the second day, many players and spectators discovered a weird smell in the playing area. A couple even reported the burnt smell. It turned out that the smell came from the French player Franck Canu's jacket. The Frenchman had been smoking half a cigarette or so, and then he had put it into his pocket without extinguishing it properly.

"Before the round, I smoked a cigarette. Then I had to hurry back to play, so I put out the cigarette and put it in my pocket," Franck explains. He then went to play. "Suddenly I smell something burning, I look around, and I see that my jacket is burning! There were no flames, so I put out the fire with my hand," he says.

The result of the small incident was a slightly toasted pack of Marlboro cigarettes and a huge hole in Canu's pocket. Fortunately, he was wearing a heavy leather jacket, and so it didn't get damaged a lot. "Good quality," Franck grins and pats his jacket.

The Frenchman admits that he was a little worried after the incident, but he still managed to win the match. And he promised that he would make sure his cigarettes were put out properly in the future. The perpetrator though, the half-smoked cigarette that caused the fire, still lives in his jacket. "I didn't find it. I don't know where it is," Franck says.