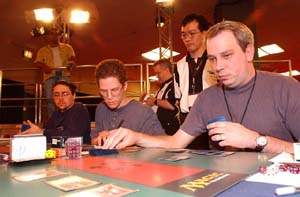 They haven't accomplished a whole lot as individuals, but something happens when the members of the Car Acrobatic Team sit down for team events. It's not even clear that they all like each other, but somehow, some way, they just keep winning. Aaron Forsythe actually had to trick Andrew Cuneo into playing with Andrew Johnson at a team PTQ over a year ago, but they won that, finished second at last year's team PT, and now they're the only team that has ever made two Top 4 appearances at the team Pro Tour. They even made Top 4 at the Tokyo Team Masters Series event.

On top of all their talent and results, these are also great guys. Andrew Cuneo attracted a lot of attention (and a couple of endorsements for the Invitational) for an event that he probably didn't even think twice about - letting Andre Konstanczer take back a game-losing play in the finals of the Chicago Masters Gateway tournament because Konstanczer's mistake had been caused by confusion over the tapped status of a token creature represented by a coin. Forsythe, a member of the 2000 Worlds Team Champions from the USA, volunteers as an editor for Meridian Magic. Johnson is the youngest member of the team. He arrived at Carnegie Mellon University after Cuneo had already graduated and Forsythe had already graduated from the university down the road: Pitt.

All three are currently living in Pittsburgh, PA and are members of Team CMU. Their draft strategy evolved after many practice sessions with Mike Turian, among others, at "The O" - the restaurant on campus where Team CMU has always gathered. Johnson and Turian have been roommates for 2 years now, in an apartment that also includes 2001 Worlds team champion Eugene Harvey and playground legend Dan Silberman -one of the 4 original members of Team CMU. I don't want to give away much about their strategy because I expect the other members of the Top 4 to read the coverage Saturday night, but suffice it to say that it's a but different than the conventional wisdom and the other player they shared their technology with (Zvi Mowshowitz via Turian's teammate Scott Johns) is also going to playing on Sunday with his own team.

The C.A.T.'s take on the German team Phoenix Foundation, captained by Kai Budde, in the quarterfinals. Budde did not work with his constructed playtest partners Johns or Mowshowitz for this Pro Tour, but he independently came up with a very similar draft strategy. The two teams played in round 11 with the Germans offering a draw and the C.A.T.'s accepting it after falling behind 1-0 in each of the matches. It'll be interesting to see whether either team can modify their draft strategy based on that experience.