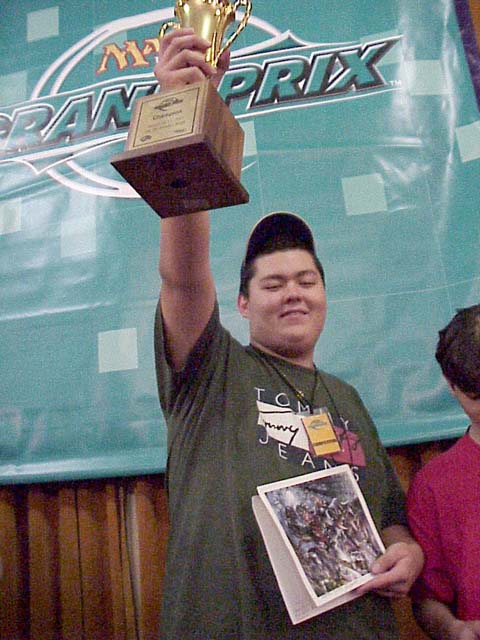 Throughout the Grand Prix, Carlos Romao of Brazil had kept his expression neutral. He was focused on the business of winning. He wore the same look as he crossed the stage to collect his victor's trophy. As he raised it above his head, the grim visage became one of the biggest smiles in the game. The assembled spectators set the sight to music with their cheering.

The stress of the finals was gone. His nerves were worse than expected, because he had a plane to catch at the tournament's end, and it was one he couldn't afford to miss. He had school the next day, and if he wasn't there he would fail. Compounding his trouble, he wouldn't be allowed to play in the Latin Championships or Pro Tour Barcelona. As soon as the awards were handed out, he made a beeline for the exit. Silvio Compagnoni caught up with him and asked him a few questions on his way out.

Rio was his fourth Grand Prix, and also his most challenging. He said that all the players were on their best game, a "very high level" in his own words. He made Top Eight at Grand Prix Sao Paulo in 1999, but his excellent track record was small comfort to him here.

The first game of the quarterfinals was hardest for him. He wanted to take home the championship very badly, and his anxiety rattled him. However, his practiced composure soon took hold, and he breezed through his next two rounds.

He was quite overcome by day's events. His many supporters wouldn't let him pass without shaking his hand, patting him on the back, and shouting out his victory. All he could add to the celebration was that "Winning is wonderful!"