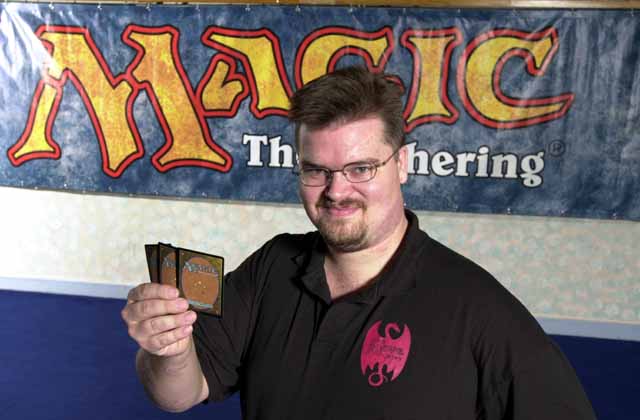 Monday before Grand Prix Manchester, Darwin Kastle quit his job to play Magic full time. Then he flew to the Grand Prix, where his career as a professional Magic player got a kick-start - Darwin won the whole thing. "This is a good way to get started. It seems like the time I spent was worth it," he smiles after one week of practising Invasion limited.

Darwin is one of the Magic veterans. He has played Magic since The Dark, and he has had plenty of top performances; Darwin won the Rio Invitational, he finished second in Pro Tour Atlanta, third in Pro Tour Paris and third in the very first Pro Tour in Los Angeles. However, he had yet to win a major individual tournament, and he was getting tired of never winning. "I spent the whole week visualising myself winning, because I don't think about that often enough. I've been proud of myself for doing well, and I've thought that I'd eventually win something, but enough of this eventually [stuff]!" he smiles and glances down at his trophy.

The Your Move Games team member spent a lot of time playtesting before the tournament. But the testing didn't always go too well. Darwin played Sealed at Your Move Games the Tuesday before the tournament, and there he got his butt kicked by a player he considered to be 'not of my calibre.' "But I learnt a lot, I learnt that my strategy wasn't optimal. So I figured out what strategy I would use, and I stuck to that all weekend," Darwin says.

Basically, Darwin's strategy was to play red, black and blue, and to ignore green and white. That strategy took him all the way to the top, where he intends to stay. "I think I've proved that my success isn't a fluke. With Masters and the increased pay-outs there is enough money in Magic to make a living out of it. I am already at a high level of play, and if I commit myself fully to Magic, I think I can make a successful career," Darwin explains. So from now on, he'll go to a lot of Grand Prix tournaments and playtest much. "I'll try to win money every time, so that I get my paycheck," he smiles.

In the finals, Darwin took down the British player John Ormerod. Ormerod went undefeated throughout the whole tournament, but his streak ended in the finals. Still, he wasn't disappointed by coming in second. "I am really happy about doing well and being successful," John says. He enjoyed playing and he even felt good about being in the playoff in spite of the audience and the pressure. "I've spent enough time playing Magic in front of people, so I enjoyed it instead of being terrified," John grins.

Before the tournament, he had merely hoped for a day two, but others had higher expectations. Driving to Manchester from London, John sat in the seat next to the driver Scott Wills, and weirdly enough, that front passenger seat has bred a lot of champions. "Apparently you do very, very well if you sit next to Scott Wills," John says, who faced a little dilemma at 10-0. Several players approached him and told him he would be safe into the Masters if he dropped, and in addition, he would get into top 8 of Manchester and thus get prize money. But John chose to play: "Dropping is not playing the game�"